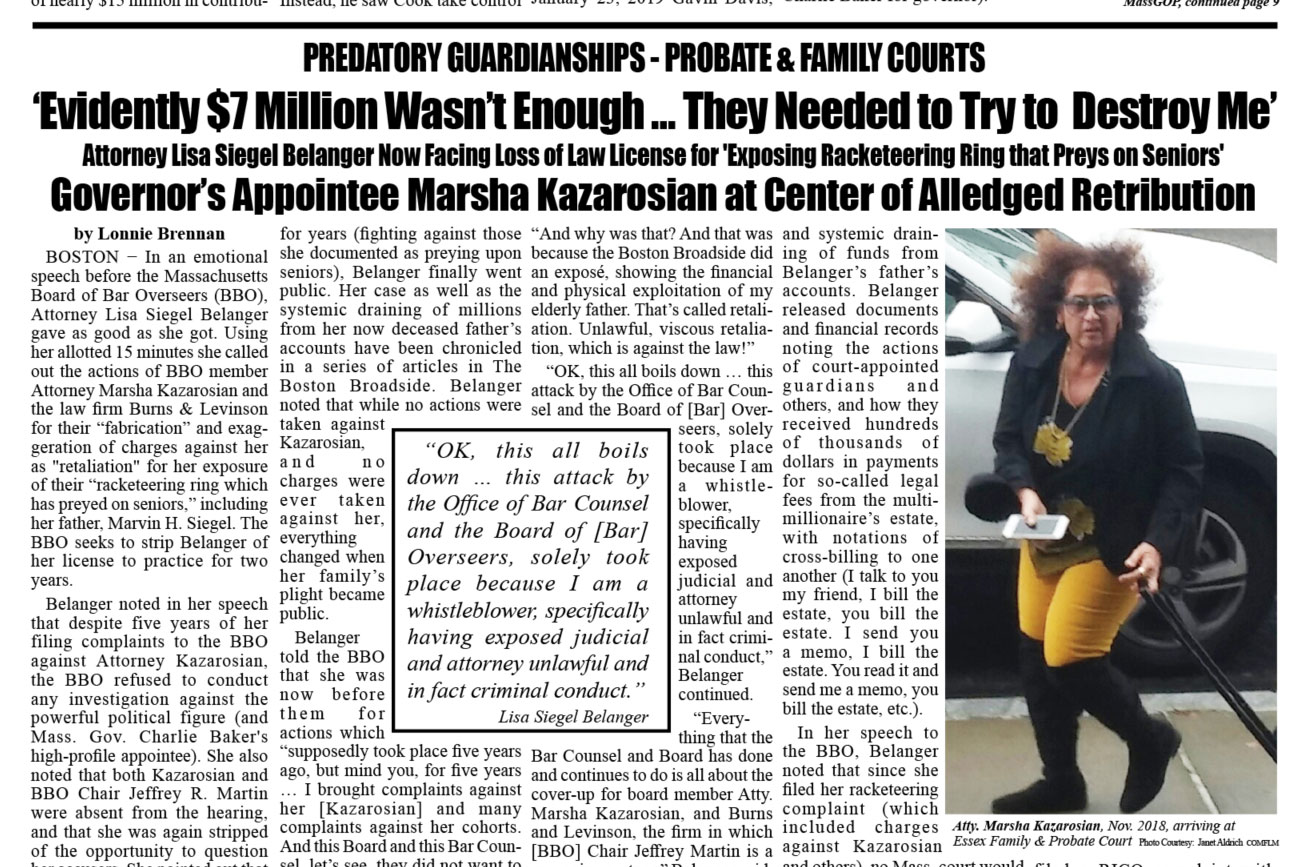 BOSTON − In an emotional speech before the Massachusetts Board of Bar Overseers (BBO), Attorney Lisa Siegel Belanger gave as good as she got. Using her allotted 15 minutes she called out the actions of BBO member Attorney Marsha Kazarosian and the law firm Burns & Levinson for their “fabrication” and exaggeration of charges against her as “retaliation” for her exposure of their “racketeering ring which has preyed on seniors,” including her father, Marvin H. Siegel. The BBO seeks to strip Belanger of her license to practice for two years.

Belanger noted in her speech that despite five years of her filing complaints to the BBO against Attorney Kazarosian, the BBO refused to conduct any investigation against the powerful political figure (and Mass. Gov. Charlie Baker’s high-profile appointee). She also noted that both Kazarosian and BBO Chair Jeffrey R. Martin were absent from the hearing, and that she was again stripped of the opportunity to question her accusers. She pointed out that Martin serves as partner in the firm Burns and Levenson, a firm also at the center of Belanger’s complaint. (Yes, Belanger took on some of the most connected lawyers in Massachusetts.)

With no relief from the courts for years (fighting against those she documented as preying upon seniors), Belanger finally went public. Her case as well as the systemic draining of millions from her now deceased father’s accounts have been chronicled in a series of articles in The Boston Broadside. Belanger noted that while no actions were taken against Kazarosian, and no charges were ever taken against her, everything changed when her family’s plight became public. 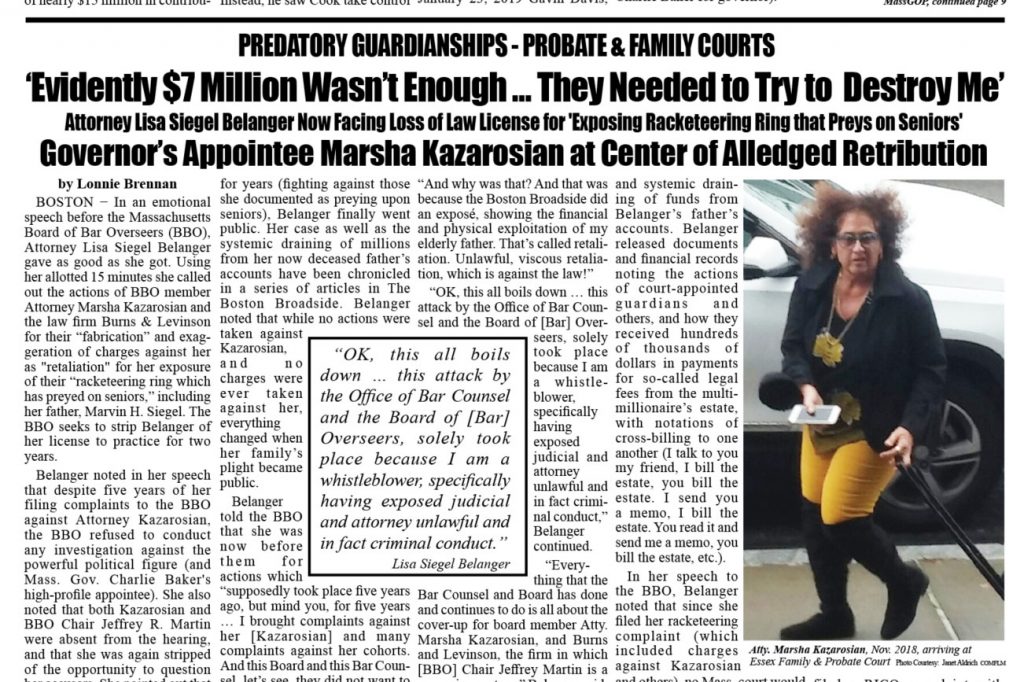 Belanger told the BBO that she was now before them for actions which “supposedly took place five years ago, but mind you, for five years … I brought complaints against her [Kazarosian] and many complaints against her cohorts. And this Board and this Bar Counsel, let’s see, they did not want to do an investigation, but, five years later, lo and behold, what does Attorney Marsha Kazarosian do? She files a complaint against me.”

Belanger continued in slow measured tone, before winding up and slamming forward with: “And why was that? And that was because the Boston Broadside did an exposé, showing the financial and physical exploitation of my elderly father. That’s called retaliation. Unlawful, viscous retaliation, which is against the law!”

“OK, this all boils down … this attack by the Office of Bar Counsel and the Board of [Bar] Overseers, solely took place because I am a whistleblower, specifically having exposed judicial and attorney unlawful and in fact criminal conduct,” Belanger continued.

“Everything that the Bar Counsel and Board has done and continues to do is all about the cover-up for board member Atty. Marsha Kazarosian, and Burns and Levinson, the firm in which [BBO] Chair Jeffrey Martin is a managing partner,” Belanger said. Martin is also listed as general counsel for the firm.

Indeed, in a series of articles in the Boston Broadside, Belanger’s plight was chronicled along with the isolation, forced medication (hidden-in-his-food), and systemic draining of funds from Belanger’s father’s accounts. Belanger released documents and financial records noting the actions of court-appointed guardians and others, and how they received hundreds of thousands of dollars in payments for so-called legal fees from the multi-millionaire’s estate, with notations of cross-billing to one another (I talk to you my friend, I bill the estate, you bill the estate. I send you a memo, I bill the estate. You read it and send me a memo, you bill the estate, etc.).

In her speech to the BBO, Belanger noted that since she filed her racketeering complaint (which included charges against Kazarosian and others), no Mass. court would hear the complaint, and no action has been taken to stop lawyers whom she charges have preyed on seniors in a similar fashion to those who drained her father’s estate with impunity.

On February 12, 2015, Belanger filed a RICO complaint with thousands of pages of supporting documentation in the U.S. District Court of Massachusetts (Lisa Siegel Belanger and Devora C. Kaiser v. BNY Mellon Asset Management, et al., Docket No: 1:15CV10198). On February 28, 2015, she provided Governor Charlie Baker six CDs containing supporting documentation of how attorneys, judges, and legislators embezzled and money laundered “as they forced elders out of their own homes into nursing homes, isolating elders from their family, needlessly drugging elders with antipsychotics, hastening death, and extortion.”

The guardians appointed by the Mass. Probate and Family Court and others have repeatedly been charged with following a pattern of stripping seniors of their rights and dignity, and systematically isolating, medicating, and then liquidating the seniors’ finances. The Broadside has and will continue to print the stories of many seniors found in this situation. In Belanger’s case, she struggled for years against the probate court as she sought to “stop the systemic exploitation” of her father’s estate from Kazarosian, the firm of Burns & Levinson, and others.

Belanger had previously participated in two days of what was scheduled as a three-day, “so-called trial” before a subset of the BBO, before Belanger refused to participate any further in an event she called a “1620 witch trial.” Belanger moved to closing arguments, she said, rather than continue in the “Kabuki show.” Belanger stated repeatedly at that trial, and at the 15-minute appeal hearing in Boston’s BBO offices, that the “fix was in from the start.” She cited fabricated and exaggerated charges against her, as well as the inability to present a full defense and full questioning of her accusers. She was clearly emotional, and certain BBO members were clearly stunned by her brash statements.

Belanger laid out for the board that evidently stripping her father of $7 million wasn’t enough; now, certain lawyers were conspiring to personally destroy her and her ability to work.

The prosecution of Belanger by the BBO centered around Belanger twice defying a court order which prohibited her from communicating with her father while he was under what Belanger termed, “house arrest,” guarded 24/7 by guardian-contracted elder care services, for years. (With her father isolated by the court-appointed guardian, she had to repeatedly learn of her father’s condition through e-mails which the guardians would send to her.)

Belanger’s violations consisted of visiting her father on two occasions during those years, while he was in the hospital with pneumonia and she had been notified that he may die. She barely tolerated being separated from her father during holidays, but when she was told he was deemed near-death, she walked into the hospital to “just hold his hand. Be with him. Comfort him.” She was fined both times by the court judge that she charged with collusion, and the BBO said she initially refused to pay the heavy fines, instead fighting for appeal which was subsequently denied. She eventually paid the fines.

Prosecution for the BBO also stated that Belanger stole $85,000 (0.1%) of the $7 million from her father’s estate. Belanger blew back at the BBO repeatedly that no one has ever charged her for taking any funds in any way at any time, and that she would welcome the board’s pursuit of said charges in a court of law, so that she could properly defend herself against the “fabrications.”

In her 15-minute allocated sole opportunity to appeal the recommendation to strip her law license, Belanger asked BBO members to state their names for the audio record. “We don’t do that,” was the reply. The BBO also set strict, written restrictions on the press (only the Boston Broadside and Janet Aldrich of Catch-of-the-Day Video News at COMFLM Registry News were present), denying any still photography, and only allowing focus of cameras on Belanger and the prosecutor for the BBO. One representative of the BBO directed the exact placement of the cameras before the hearing which began shortly after 5 p.m., and a second representative doubled-checked the viewfinders of the cameras before the proceedings to ensure compliance.

The Broadside jotted down the names and verified the following BBO members present (behind their name plates) at the 15-minute hearing in the dark, low-ceiling room on the 2nd floor of the BBO’s 99 High Street offices in Boston’s financial district:

The BBO has taken the matter under advisement, and at press time Belanger awaits their decision.