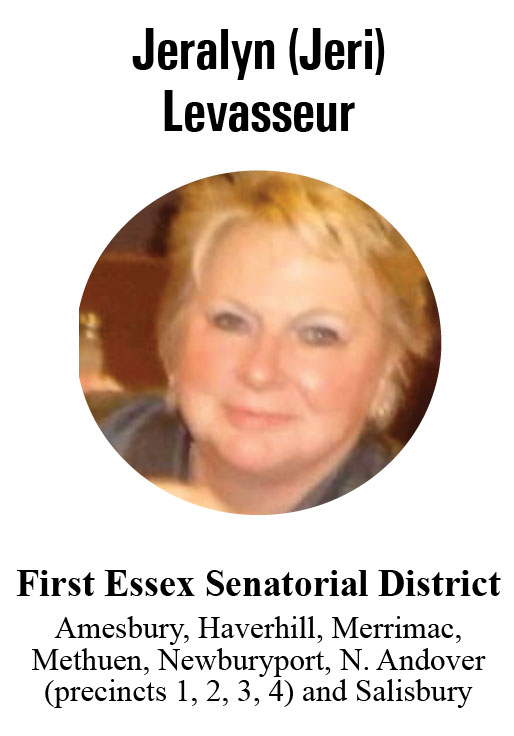 My name is Jeri Levasseur and I am from Haverhill. I believe we live in a time which calls for a strong two-party system to create checks and balances. We should never be under one-party rule, or a socialist form of government.

I have been trained by the Foundation for Applied Conservative Leadership as a political activist and been diligently working for candidates over the years. I most recently worked on the campaign to elect Republican Geoff Diehl to the U.S. Senate.

I am the president of the MA Republican Assembly, Chapter 6, and have developed a well-organized and effective political group of men and women. I was also the vice president of The Merrimack Valley North Shore Women for the Future, Republican Women’s group.

I retired from Mass. General Hospital in Boston where I operated in administration. I spent over 20 years working at MGH and her sister facility, Spaulding Rehabilitation Hospital, with a total of 40 years in the healthcare profession in leadership roles. I will bring those management skills with me if I am elected to this position.

I am very proud of our extensive military family where all branches of the U.S. Armed Services are covered. I am the daughter of an Office of Strategic Services, WWII veteran who was called back to Korea. My husband, Robert, served with the Air Force in Vietnam and my stepson, Eric, was a Marine Security Guard (MSG protecting U.S. embassies, our diplomats and foreign VIPs).

I am a Region I Leader for Wreaths across America, working diligently selling wreaths from January to November to help cover the graves in Arlington National Cemetery for the Christmas and Hanukkah season. Our military, veterans and Gold Star families are very important to me. This is a tiny way to give something back to those who paid the ultimate sacrifice and provided for my freedoms.

I am a member of the National Rifle Association and a strong advocate for the Second Amendment. I also have a seat as a member of Representative Lenny Mirra’s gun violence working group. We meet with members on both sides of this issue. I am also a pro-life conservative and an outspoken opponent of the Roe Act.

My large family is also made up of police and law enforcement members, and my grandfather was a Worcester firefighter. We all perform service to others.

My job, if elected, will be to work with Chairman Jim Lyons building our Republican Party. The state committeewoman must be visible, active and always available to her Republican town/city committees, along with her elected officials in the First Essex District.  ♦