On August 3, 2022, after a 9-0 Supreme Court decision, Mat Staver of Liberty Counsel and Hal Shurtleff of Camp Constitution jointly raised the Christian flag on the Boston City Hall public forum flagpole. The flag raising followed five years of litigation following the city’s denial of Camp Constitution’s request to briefly fly the Christian flag on Constitution Day 2017 to commemorate the contributions of Christians to the founding of the United States, to Massachusetts, and to Boston.

Up to that point Boston had never refused a request to raise a flag, but the word “Christian” gave Boston a reason to believe it could deny the request. The lower courts sided with Boston as the case worked its way through the legal system, but the Supreme Court saw this as a First Amendment issue. The Supreme Court wrote “Boston did not make the raising and flying of private groups’ flags a form of government speech. That means … that Boston’s refusal to let Shurtleff and Camp Constitution raise their flag based on its religious viewpoint ‘abridg[ed]’ their ‘freedom of speech.’”

The crowd of about 150 cheered and applauded as the Christian flag joined the Stars and Stripes and Massachusetts state flags flying over the city. During the raising of the flag, Camp Constitution’s Franklin Soon played “Amazing Grace” on his trumpet while his brother, Benjamin, accompanied him on the violin.

The master of ceremonies was Boston’s own Jonathan Alexandre, who was from Liberty Counsel and also an instructor at Camp Constitution.

During the ceremony, Camp Constitution Co-Founder and Director Hal Shurtleff said: “Back in 2017, we wanted to have a simple ceremony to commemorate the Constitution Day and Boston’s rich Christian history. Those speakers we had planned to be here for that event are here today. But I just want to thank you, a special thanks to Liberty Counsel … and I want to give the glory to God… We have a great Constitution, and we have a wonderful First Amendment. But just like when it comes to muscles, it you don’t use it, you get weak. When I got the rejection email from the city, and it said separation for church and state, I knew we had a case. And Liberty Counsel was more than happy to take the case within 24 hours.”

Liberty Counsel Founder and Chairman Mat Staver followed with: “For 12 years prior to 2017, and for five years from 2017 to 2022, up until August 3, this day, 2022, your viewpoint was excluded from this flagpole public forum. Every viewpoint was permissible to go on this public forum flagpole except a Christian viewpoint. You were excluded for 12 years before this issue began. For 12 years there were 284 applications, not a single denial, virtually no review and the only reason why Camp Constitution’s request to fly this flag was denied was not because of the flag itself… It was Hal Shurtleff’s view of that flag. It was because of one word in the application, the word Christian that preceded the word ‘flag.’ He was told by the city official that if he changed the name of the flag to a non-religious name on the application, that flag could have flown in 2017 and we would never be here … if Hal would have lied and called it the Camp Constitution flag. This is not the Camp Constitution flag. It is the Christian flag.”

After the speeches, M/C Jonathan Alexandre led the crowd in a stirring rendition of the “Battle Hymn of the Republic.”

To close out the program, Christian recording artist Ben Laine sang “God Bless America” with the crowd joining in.

The raising of the Christian flag at Boston City Hall was supposed to be the last “public” flag raised on the public forum flagpole. Because of the court proceedings brought by Camp Constitution and Liberty Counsel, Boston had announced on October 19, 2021 that it was not accepting any new flag-raising applications. After the Supreme Court decision, the assumption was that Boston would continue this policy.

However, the Boston City Council could not accept defeat. Councilors Kenzie Bok, Ruthzee Louijeune, and Ed Flynn led the unanimous passage of a new ordinance amending the city of Boston code regarding the display of flags on City Hall Plaza.

The new ordinance codifies that the raising of other flags on the city’s flagpole are official government speech by the city of Boston and that the city’s flagpoles are not intended to serve as a forum for free expression by the public. Additionally, all flag raisings must be initiated by a proclamation of the mayor or by a Boston City Council resolution.

You may view a video of the August 3rd Christian flag raising and ceremony here: tinyurl.com/ChristianFlagRaisingBoston. For more information on Camp Constitution: http://campconstitution.net/ or Liberty Counsel: https://lc.org/. 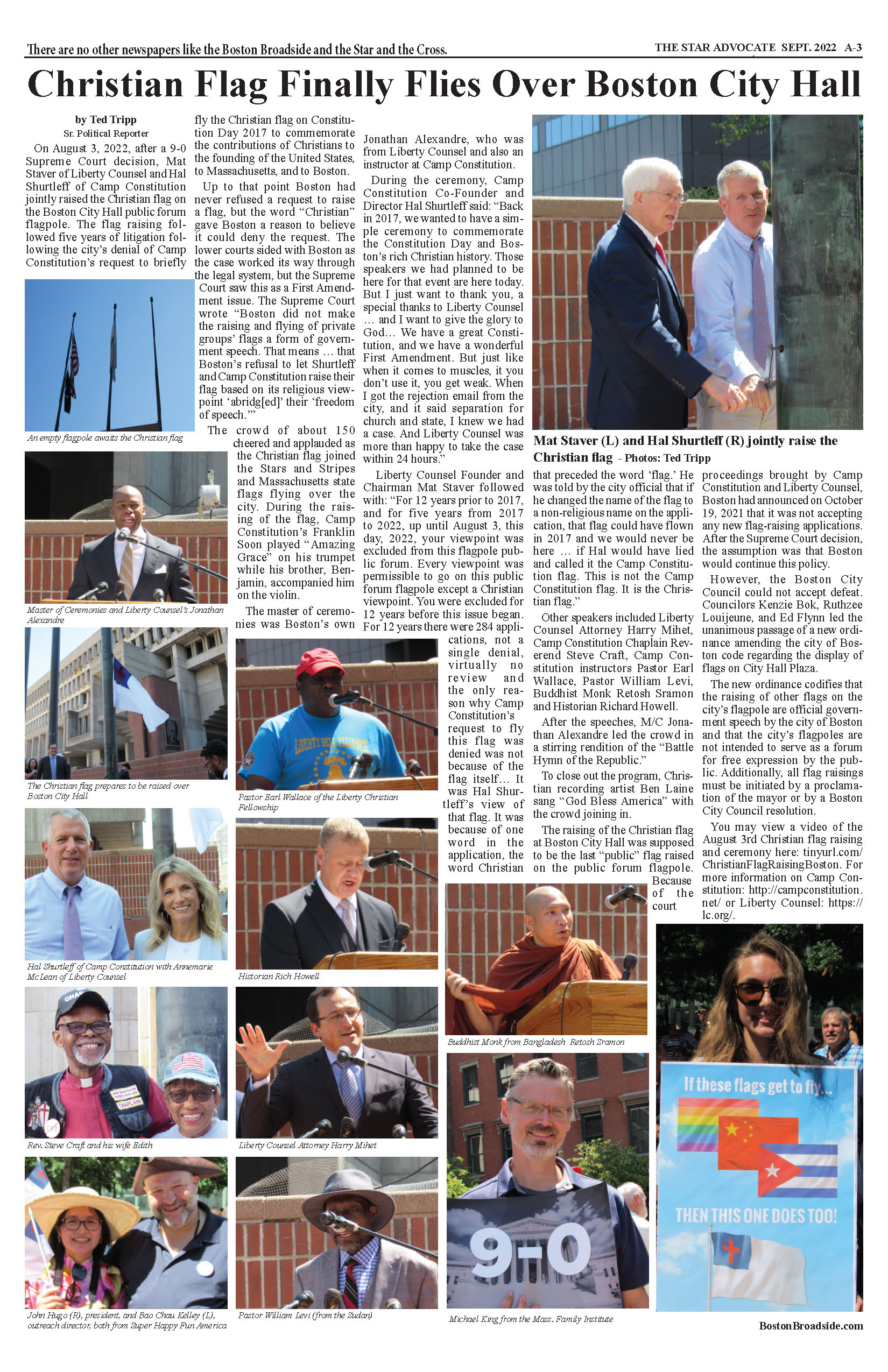 Biden Says in Massachusetts Speech Today That He Has Cancer

At 8:00 mark into speech, says he and so many people have cancer because of local oil refinery where he grew up. But, “that’s the past.”  Which is it Joe? Read More…

The Beautiful and The Ugly – Lessons of Life and Memories, While Holding a Sign

The Beautiful and The Ugly On November 3, my wife and I with a few other people from Concord and Carlisle, Mass. were holding signs for political candidates on Monument Read More…