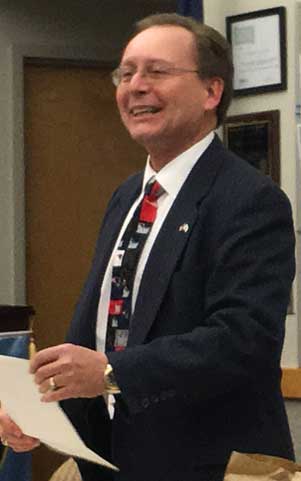 “On day one – day one – I will restore your rights,” Attorney General Candidate Jay McMahon declared at a candidate’s forum in Rockport last month. McMahon was referring to reversing Democrat Attorney General Maura Healey’s unilateral redefinition of lawful guns which has placed many gun owners in legal limbo.

Healey’s proclamation made many guns in the state illegal to possess. She promised not to immediately prosecute anyone who currently owns one of these many popular guns, but with so many legal gun owners becoming illegal by decree, Gun Owner’s Action League Executive Director Jim Wallace summarized Healey’s action of “essentially turning thousands of legal gun owners – overnight – into felons in waiting.”

Healy had issued her mandate just before the 2016 Democratic National Committee convention in a blatant attempt to propel herself into the national spotlight as she sought to jump upon the Hillary Clinton boat and sail into what many expected would be an extremist liberal presidential administration. Clinton’s defeat squelched Healey’s upward mobility, for now, but she continues to assault legal gun owners while apparently spending most of her time as an advocate for her activist causes – and/or filing lawsuits against President Donald Trump or his administration in support of illegal immigration and other such matters.

Gun rights were just one of many topics and issues addressed by candidate McMahon who is licensed to own guns in many states. Other topics included his strong stance for creating true treatment programs to combat opioid addiction, and his message of how to bring about truly safe communities, including his opposition to the growth of Sanctuary Cities in the state.

“What is she doing?” McMahon asked. “What is Maura Healey doing to protect our families, our friends and our neighbors from opioids? The number of overdoses has quadrupled since she’s been in office. Seriously. Those are the numbers. What has she done? I’ll tell you what she’s done. Nothing. Nothing that has had any positive effect. In fact, it’s much, much worse.”

McMahon, a father of five and married for 25 years, related a personal story of the impact upon his family of the opioid crisis. He lost his oldest son, Joel, a former member of the Army who in 2003 was part of Iraqi Freedom – and part of a group that was first-in on the assault – who lost his life after receiving VA care for an injury he received in that battle by addiction to VA-prescribed medicines. They paved the way to an ultimate opioid overdose by the war veteran in 2008.

McMahon, a former member of the National Guard, former law enforcement officer, and practicing attorney for 25+ years, detailed how he has clients from Europe to California and from Canada to Florida, Louisiana, and Texas. He has been in just about every court level in Massachusetts except for the Supreme Court. He has argued before the First Circuit Court of Appeals in Boston, the Federal District Court in Boston, the Supreme Judicial Court, superior courts, probate courts, and district courts.

McMahon discussed some of the failings of current opioid treatment programs in Massachusetts. He noted how: “The current treatment centers don’t work. They have a 99% failure rate. Just ask anyone. I did. I was in a room … a support group for those dealing with family members or friends with opioid addiction. I asked them to raise their hands if they had a child or loved one who went through the treatment program once. No one raised a hand. I asked, how about twice. Again, no one raised a hand. I leaned over to my wife, Shelley, and asked her – am I asking the right question? She said, yes, just keep going. So, I asked if they had someone who went through the [Massachusetts sanctioned program] five times – a few hands, then 10 times? Every hand in the room went up. The programs don’t work. They don’t treat them right. They’re too short. They keep getting released and need to come back again, and again, and again to the program. Often 10 or more times.”

McMahon proposed that two things must happen: first, we need an attorney general who focuses on Massachusetts, not personal political agendas, and aggressively pushes for strict opioid prosecution at all levels. Second, he said we need to look at the craving that goes on with addicts, and work together to adopt and deploy meaningful long-term treatment and post-care treatment to ensure there is time for the body to stop craving the opioids. He questioned why we keep doing the same thing in Massachusetts, where other states and jurisdictions have created programs with 90% success rates, not like “our 99% failure rates.”

Healey, an activist lesbian, is infamous for telling women to “hold it” if they don’t want to share a bathroom with a man. She, along with Republican Governor Charlie Baker, then Democrat Senate President Stanley Rosenberg (a homosexual who is married to a man more than 35 years his junior, and was recently forced to step down from the role of Senate president due to allegations and investigations regarding his husband’s alleged sexual assaults and influence peddling actions), and House Speaker Bob DeLeo, ensured that men would have access to women’s and girls’ bathrooms, shower rooms, and changing rooms.

Any position for which Healey should choose to run in 2018, including re-election as AG, will be accompanied by millions of campaign dollars from unions, lesbian/bisexual/homosexual/transgendered activists, and left-focused liberal and socialist supporters.

“How is it, she’s been the AG for three years, and she’s been in that office for seven years, how is it that we’ve heard of no indictments for public corruption, none whatsoever, yet the feds can find it?” McMahon asked. “How come the feds can find it, and she can’t? Because of the entrenchment, the [Democrat] Party entrenchment. We haven’t had a Republican in there since the 70s.”

With Maura Healey, it’s never been a better time to be a government employee, McMahon said. He detailed how Healey threw Massachusetts resources, repeatedly, against President Trump. “There is a loser, and that’s the Massachusetts’s taxpayer … you’re paying Maura’s lawyers to go in there … they’re having fun on your dime. I’ll end that when I get in there,” he said.

“The time for action is now,” McMahon told his audience. “You have to come out (and support candidates and vote).”

2 Replies to “Attorney General Candidate Jay McMahon: ‘On Day One I Will Restore Your Rights’”