From the March 2018 printed edition of The Boston Broadside:

Readers of this paper may recall how in November of 2017 I received a call from a nursing home resident, 69-year-old Mary Frank, who wanted to get her story out about the abuse she has suffered under the guardianship imposed upon her by who she terms a corrupt Cambridge, Mass. Probate Court Judge, Maureen Monks, as well as the court-appointed JF&CS guardian, Pam DeCorlo, and others from JF&CS.

I met with Mary, took her extensive recorded statement, and printed it in the December edition of the paper, as well as additional information in the January 2018 issue. When I received the Schwartz e-mail, I had visited Mary a total of three times: once in November, once in December, and once in January. (During the January visit, I was accompanied by a writer for this paper who wrote his summary of our visit in the February 1st edition.)

Atty. Schwartz, in his e-mail, stated in part: “Your frequent visits to Ms. Frank and efforts to contact her have caused her distress.”  He went on to make certain demands and to threaten police involvement.

I could fill pages here about Schwartz’s efforts to isolate Mary Frank. But, the photograph I took of Mary’s legs on the afternoon of February 10 (a week after receiving the threatening letter from the Cambridge attorney), seems to tell the whole story of the type of care she has been receiving under the guardianship of JF&CS. A timeline of photos taken of her legs on each visit chronicles her condition. Mary reported she fell at Marlborough Hills Nursing Home, and – after an extensive delay – was sent to a hospital for X-rays. She was then shipped to the Reservoir Center for Health & Rehabilitation, 400 Bolton Street, Marlborough, Mass.  At the time of my visit, Mary was sporting the rock-solid red cast shown in the photo. 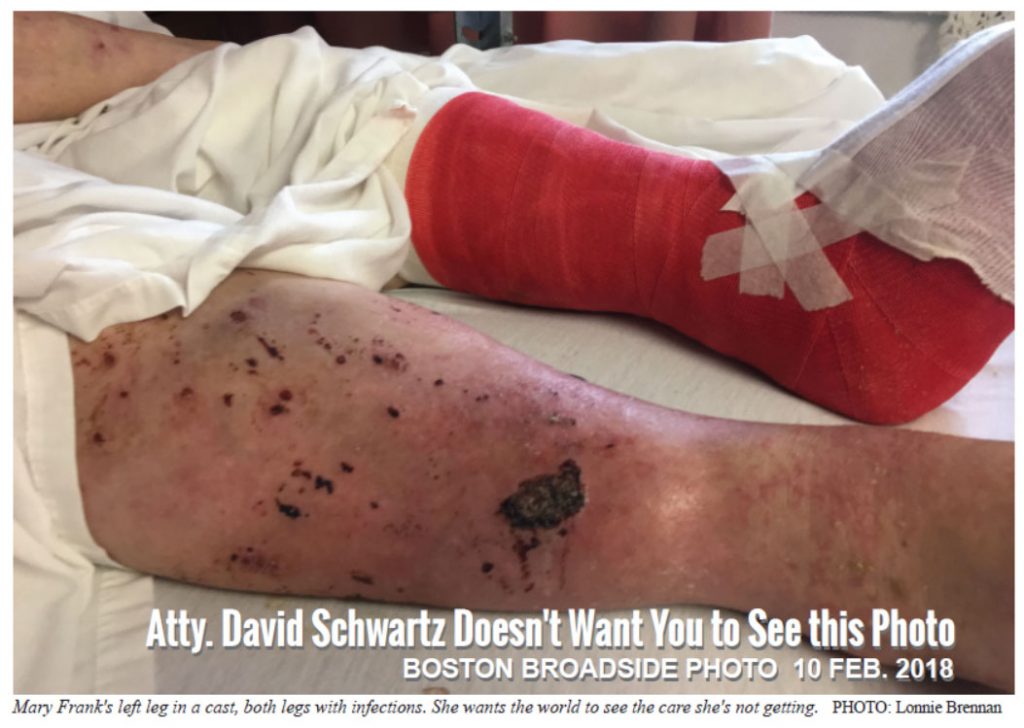 The three-hour Saturday afternoon drama of visiting Mary on February 10th is long. The story involved a trip to CVS to purchase chocolate gifts Mary wanted to give to some of her nurses, and a trip to Walmart to purchase a remote control for her television set (she had been waiting a month for one to be provided by the staff. I spoke with staff members via telephone on three occasions, listened to their empty promises, and then finally relented to take the 102-mile round trip to the facility to deliver and program the remote, and risk arrest.)

I’ll eventually print a detailed account of the visit and the near-tears of joy Mary experienced after I programmed the remote and she was able to change channels without begging staff members to come to her room at the end of a very long hall to change the channel for her. I’ll also detail Mary’s interaction with a cute redheaded nurse, and a witchy administrator who assaulted me, threatened detainment as I was leaving the floor, and the two very intelligent police officers whom the staff summoned at Atty. Schwartz’s directions.

Fortunately, I was able to deliver to Mary her remote control and her chocolates (she shared some with her nurses, but when she was transported to the hospital on Valentine’s Day – the day she wanted to hand out small boxes as thanks to certain nurses – she returned and found the boxes had been stolen along with the giant red “Happy Valentine’s Day” bag I delivered them in – but that’s another whole story…).

For disclosure, I should note three things:

I took a recorded statement from Mary a few days after receiving the Saturday night e-mail from Schwartz. Excerpts of it are printed on page 13. I think her words say all we need to know about JF&CS and Schwartz.

One last item. I received Atty. Schwartz’s e-mail days after Ted Tripp’s letter went out to the CEO and president of Jewish Family and Children’s Service asking them to personally get involved in helping Mary Frank (see next column). It was like a slap to the side of the head after we had made the effort to appeal to the
humanitarian side of JF&CS.    ♦ 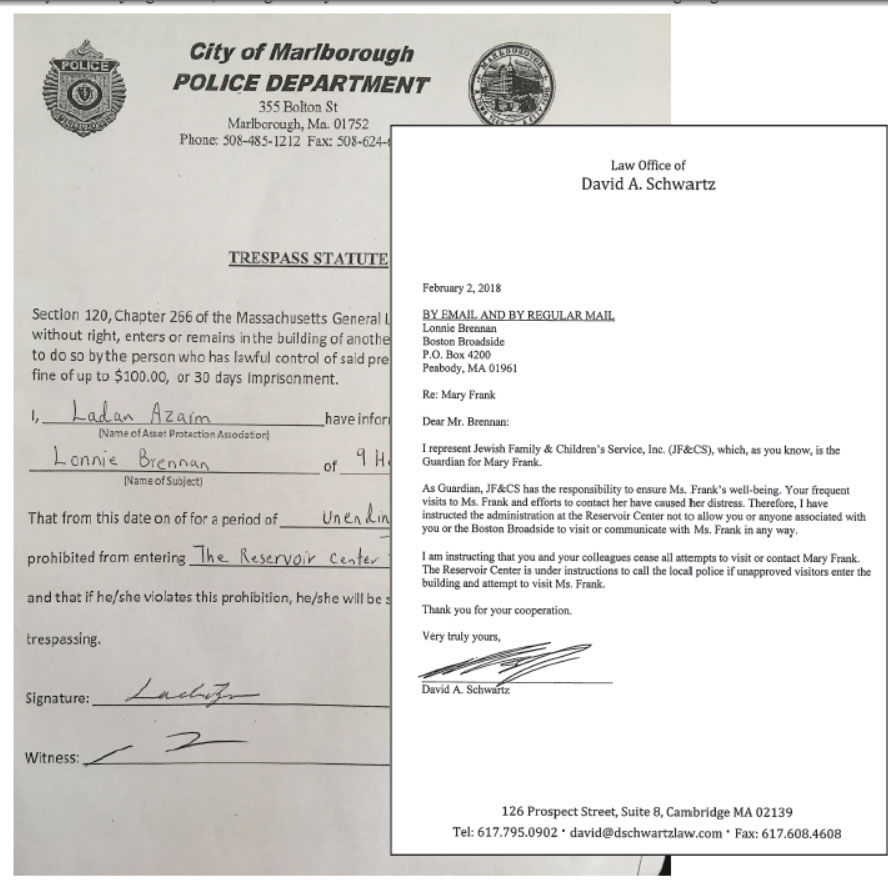 FROM THE MARCH 2018 PRINTED EDITION:

“I understand that it’s being recorded, I absolutely want it recorded…

They’re nuts. They’re terrified now that it’s in the newspaper.

Number One: The man is an a-hole. I won’t say the whole thing, but you know what I mean. And they all are, the whole Jewish and Family Services, they all are devastatingly stupid.

All they ever did … the first one [guardian] that I had, Robin Cosnick, stole everything out of my condo. My car, everything. My mother’s jewelry. And Pam DeCorlo [second guardian] stole all the rest of it. Do you think maybe THEY caused me stress? They’re mad because it’s in print now that Pam stole everything that was left at Sudbury Pines [nursing home]. That’s causing me stress. Robin Cosnick, Pam DeCorlo. This stupid idiot place is causing me stress.

You’re not guardians, you’re thieves, and we’re going to prove it, and that’s what you’re afraid of.

Lonnie has never caused me anything but goodness, and happiness, and friendship. [He] gives voice to the voiceless. He’s done nothing but care. And he’s got out what was done to me, by Minuteman and Jewish Family and Children Services. They are not guardians, they are thieves. They’ve stolen everything I got.

What kind of operation are you [Schwartz] running?

I’ve never known anyone [Lonnie] so incredibly wonderful, and I told him the first day that we met that he’s such an incredible human being to care so much about strangers, about what was done to me.

What was done to me, was as bad as you can get: taking me out of my home. I was happy in my home. And they do this. That’s what Minuteman does. They take you out, they put you away, they give you to Jewish Family and Children Services, they steal everything and take everything you’ve got.

[Guardian] Pam DeCorlo is upset because it’s in the paper, it’s in print that Louis Henderson from Sudbury Pines told the police officer that she gave her everything. Pam has everything. She’s the guardian. She’s got all my stuff: Electric wheelchair, my wig – the only wig I’ve got left, my glasses, my special makeup because I was burned in a fire, two coats .. .dresses, jewelry, everything that was left that I could get out of there.

And you’re [Schwartz] saying all of this baloney? I’ll tell you something, I would use stronger words. It starts with bull and ends with it. That’s what’ it is, it’s bull. You ought to be ashamed of yourself.

You are an idiot.

You need to look in the mirror and find out what comes back to you. You are on the way to Hell. You think you’re a lawyer? You’re just mad. Be afraid, be very afraid, because it’s all going to be in the paper.

And I want to add something:

You have the temerity to say you’re going to call the police?

UPDATE, AUGUST 27, 2021 – And so it continues, the financial and emotional torture of Massachusetts Probate Court whistleblower Lisa Siegel Belanger. Can you imagine having a judge order you Read More…

Jewish Family & Children’s Service: “A Shanda to the Jewish Community”