FROM OUR PRINTED JULY 2022 EDITION

How a Bad Drug Deal, an Accusation of Rape, and Withheld and
Misrepresented Evidence Almost Destroyed Richard Andrews

Richard Andrews was given an ultimatum: Accept a guilty plea and get out of jail in two-and-a-half to three years or go to trial and end up serving 30 years. Richard knew he didn’t commit the crime (he had, however, attempted to barter drugs for a sexual act), but the then 18-year-old also knew that 30 years in prison represented an eternity.

“He [my public defender] said you’re still young, take the two-and-a-half to three, make yourself come home young,” Richard explained. “I listened to him. I wanted to get home to my [to-be-born] boy – I signed the birth certificate when I was in jail; I wanted to be a part of his life.”

“I remember the day I stood up and I accepted that plea, and I knew damn well I was doing the wrong thing. I know I was wrong for that, and it was eating at me. I had never been so confused in my life,” Richard shared. “I had never felt so weak in my life. But I still had fight in me, though.”

And Richard needed that fight, as he further explained in one of our many phone interviews from jail on how he faced beatings while behind bars, got into fights, had his head pounded, and fought back against grown men who singled him out for having been sentenced for rape.

But before we spend much time on Richard’s initial and then extended jail time, let’s flash back 22 years to March 6, 2000 – four days before Richard stood up in court and accepted the deal. It was on that Monday that Assistant District Attorney (ADA) Linda L. Pisano, on Commonwealth of Massachusetts stationery, issued a letter to Richard’s public defender.

In her letter, Pisano put a gun to Richard’s head. She told the public defender that she had the DNA results and they pinned Richard to the crime. The letter is printed in part below (the full letter is posted online). The problem was that neither Richard nor apparently his public defender knew what was written in the letter was not the truth, not the whole truth, not even close to the whole truth. Richard did not find out the true contents until almost decades later.

Pisano wrote, in part: “As you are aware we have received the DNA results on the stain found on your clients [sic] underwear. The DNA of Debra Engram was found in the fluid mixture on his underpants. As you are aware, Cellmark Diagnostics has assigned a statistical value to the probability that Debra Engram was the source of the DNA. The statistical probability that the DNA belongs to Debra Ingram is incredibly high.”

She went on to offer the deal – plead guilty by Friday, or else it would be double that (or more, as Richard’s public defender contended).

The problem with Pisano’s letter is that it withholds and misrepresents the data. Here’s what Cellmark Diagnostics cited in their March 4, 2000 report: Regarding the non-sperm fraction of the pink underpants [Debra’s], “Richard Andrews is excluded as a source of the DNA obtained from this sample. No conclusion can be made regarding a possible secondary source.”

Regarding the sperm fraction of the pink underpants [Debra’s], “Debra Engram and Richard Andrews are excluded as sources of the DNA obtained from this sample.” (This means Debra Engram had sexual contact with someone other than Richard.)

As regarding Richard’s underwear, Cellmark reported in part, “Using 11 of 13 loci, Debra Engram cannot be excluded as a secondary source. No conclusion can be made regarding the secondary source at the remaining loci. The DNA from this sample also contains types which could not have originated from Debra Engram or Richard Andrews.” This means that Richard had sexual contact with a woman other than Debra (his girlfriend he said), but could have also had sexual contact with Debra, possibly, statistically speaking. Could Pisano have more blatantly mis-represented the Cellmark results?

As for Richard, his attempt to exchange drugs for a sexual act went badly, and began a downward spiral that put him behind bars for 23 of the last 24 years. Now 42-years-old, he’s spent more time in jail than out of jail. We’ll detail this and much more in the next installment of this series as Richard struggles to clear his name and emerge into a new life.♦ 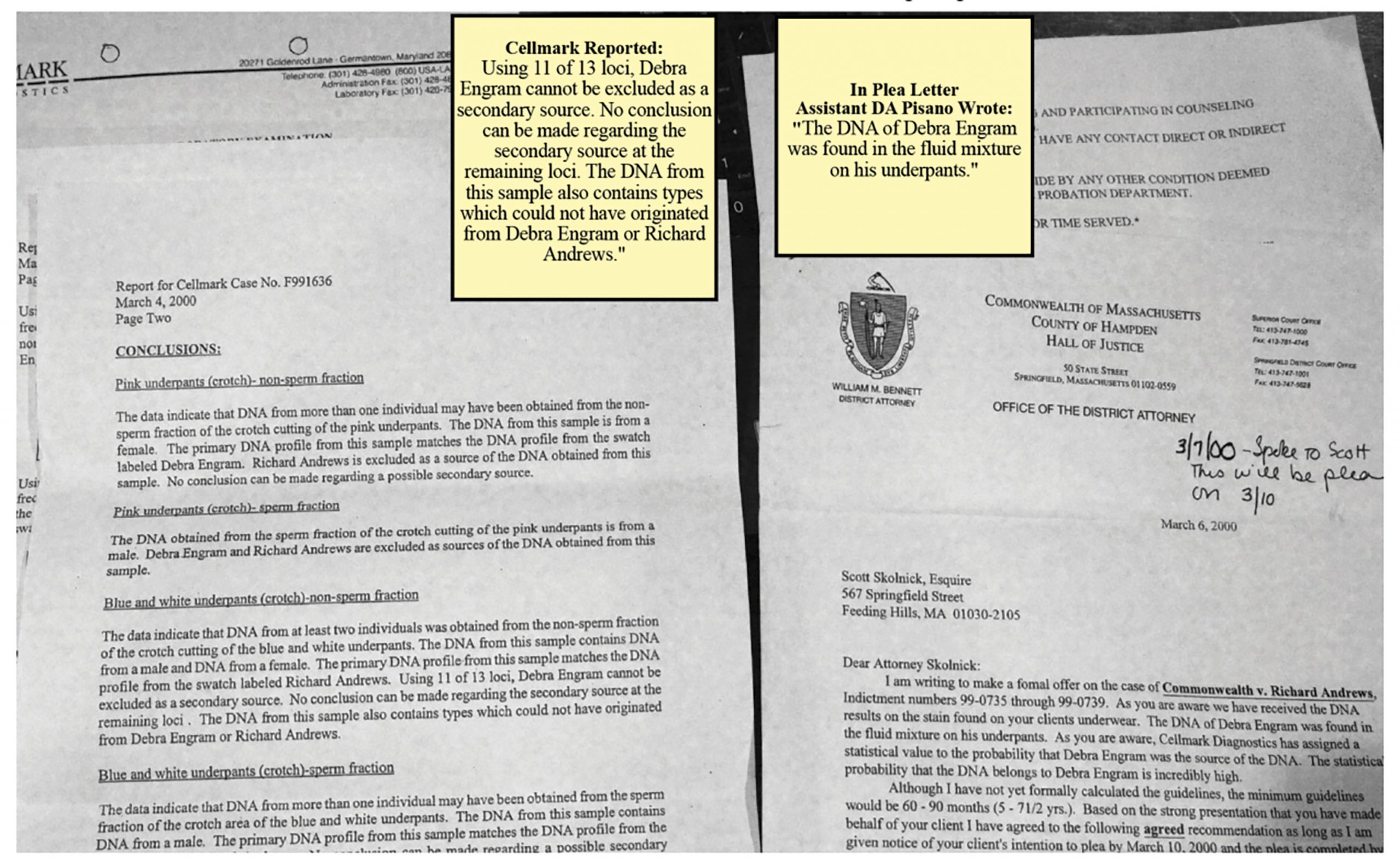 Deadline Deals On Menu for Dug-In Democrats By Colin A. Young State House News Service JULY 31, 2022…..The day of decisions has arrived. As senators and representatives prepare to gavel Read More…

Mass. Democrat Would-Be Gov Candidate Drops Out Before She Begins