Hillary/Doughty: Doughty Voted for Hillary Clinton –
Do We Really Need to Know Any More About Him?

We’ve seen this before, like a bad movie re-run. The kind of voting record that gave us higher taxes, more illegals, high rental prices, hacks, a uniparty in the State House, and children thinking there are 72 versions of gender: Another “moderate” Republican governor candidate.

Self-professed millionaire Chris Doughty parachuted into the governor’s race earlier this year, tossing in $500,000 big ones, calling it “seed” money – a token amount to grease the skids, prACoduce some nice videos, buy some marketing, and get his campaign going. And $500,000 smackers buys some great ads.

Funny, he fails to include any references to Hillary Clinton in his ads. Nor Donald J. Trump. Why funny? Because the moderate millionaire Chris Doughty entered the Mass. governor’s race highlighting to the Boston Globe how he voted for Hillary Clinton in 2016.

Drop the mic, return the lawn sign, tear off the bumper sticker.

Ask yourself: Have you ever, or would you ever, vote for Hillary Clinton? Doughty not only thought about it, he did it, and then let everyone know. He did qualify his statements by noting that he voted for Donald Trump in 2020, but had to re-qualify that statement by assuring folks that the election was all fine, and Trump is just wrong to even think that Biden didn’t stomp Trump into the ground. 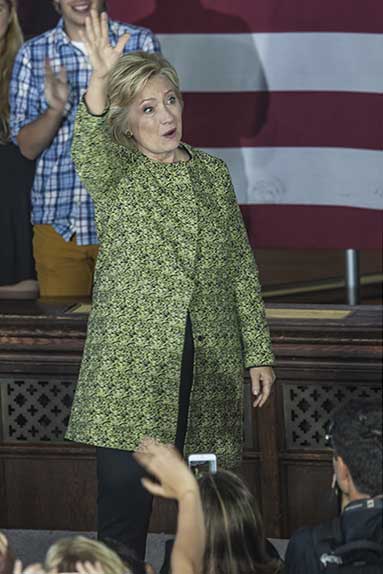 Yes, that’s right, just in case anyone suspected Doughty might not be liberal enough (think Mittens Romney or Charlie “Parker” Baker), he stepped all over himself to assure Globe readers that Biden is the legitimate president of the United States and let us know he’ll be a fiscal conservative. Isn’t that how Baker ran his first campaign? That worked out so well for us … not!

So, Doughty needs to get 15% of the votes at the MassGOP Convention in May to secure a spot on the Sept. Republican primary ballot. Should be an easy pickup as he’s expected to spend millions in the effort, and we all know that just as certain media and talk show hosts can flip on a dime when presented with moderate money (anyone remember the State Committee races?), there will most likely be enough wannabe coat holders (future government patronage workers) waiting to give Hillary Doughty the green light.

FROM OUR PRINTED MAY 2021 EDITION Lawmakers Wade Into Redistricting Without Key Data by Matt Murphy State House News Service APRIL 14, 2021…..By most accounts, the redistricting process 10 years Read More…

One Reply to “Hillary/Doughty: Doughty Voted for Hillary Clinton – Do We Really Need to Know Any More About Him?”