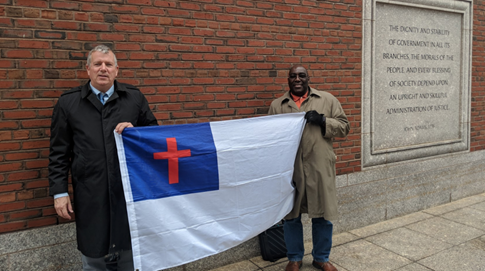 On Tuesday January 18, the U.S. Supreme Court will hear oral arguments for our-Camp Constitution’s- lawsuit against the City of Boston concerning the city’s refusal to allow us a permit to fly the Christian flag for a flag-raising ceremony we wished to hold to observe Constitution Day and the Founding of Boston.

Background of the case:

The City of Boston has a program that allows private organizations to hold flag raising ceremonies. In June of 2013, we asked for and were granted by the city, a permit to hold a flag-raising ceremony where we addressed the issue of Agenda 21 and raised the Gadsden flag without any issue. 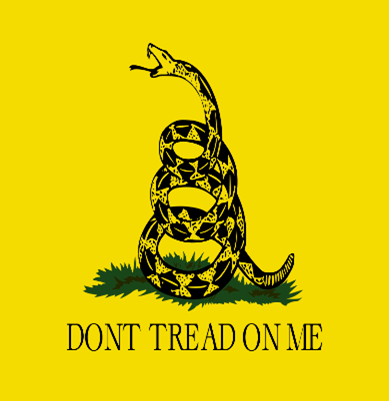 In July of 2017, we contacted the city to get a permit to raise the Christian flag to celebrate Constitution Day- September 17- as well as the city’s founding. Our program would have included short speeches by Rev. Steve Craft on the need for racial harmony, Pastor William Levi formerly of the Sudan, who was going to speak about the blessings of liberty he enjoys as a U.S. citizen, and Richard Howell, an historian, who was going to speak about Boston’s rich Christian heritage. In early September I received a call from a city official whom I dealt with in the past and was extremely helpful telling me that the permit was denied and that this is not the end of the issue. I asked for either a letter or an E-mail with the official reason. I was sent an E-mail from Mr. Gregory Rooney explaining that the permit was denied based on the 1st Amendment’s separation of church and state clause which, is non-existent. The 1st Amendment simply forbids Congress from establishing a religion. At the time of the 1st Amendment’s ratification, several states including Massachusetts had state churches. Ironically, embedded in the E-mail was the city seal which is also on the official flag of Boston. It contains a Bible verse written in Latin from 1 Kings 8:57: “May the LORD our God be with us, as He was with our fathers.” 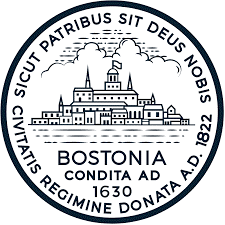 That night, after receiving the city’s E-mail, I sent out a news release to local media outlets as well as some friends. Not one of the media outlets responded, but a friend, Lynne Roberts of Second Amendment Sisters, suggested that I contact Liberty Counsel  lc.org -a Florida based  Christian legal organization.  I visited their web site and explained our issue. The next morning I received a call from Richard Mast, one of Liberty Counsel’s lawyers offering to take our case.  Several weeks later, Liberty Counsel sent the city a demand letter giving them 30 days to either grant us the permit or a lawsuit would be forthcoming. The city never officially responded. Mayor Walsh did make an announcement to the media they would allow us to hold a ceremony and that we could bring Christian flags with but could not fly one on the city’s flagpole-the same flagpole where the blood-stained flags of Communist China and Cuba are welcomed.   Since we can’t have a flag-raising ceremony without raising a flag, we declined the offer. 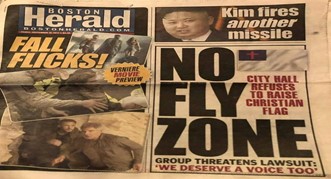 This time we received media attention, local and national including a front-page story in the Boston Herald.

Liberty Counsel filed the lawsuit in July of 2018 at the Federal District Court in Boston. We lost at the lower levels including a 3-0 vote at the 1st Circuit Court of Appeals. In June of 2021, the case was appealed to the U.S. Supreme Court and in September 2021, the U.S. Supreme Court agreed to hear the case. During every step of the way, there was much media coverage-local-national and international. It was never our intention to have this turn into a Supreme Court case. Therefore, we believe that God’s Hand is in this. The Supreme Court gets over 8,000 cases each year and usually only hears 1% of them.

As mentioned above. on Tuesday, January 18, the U.S. Supreme Court will hear oral arguments. We have received nineteen amicus briefs in our favor including a group of attorney generals from twelve states, Notre Dame, and surprisingly the A.C.L.U. and the U.S. Department of Justice. We also have nine amicus briefs against us including nine attorney generals-one of them from Massachusetts, the National Council of Churches, and the Anti-Defamation League. https://www.scotusblog.com/case-files/cases/shurtleff-v-boston/

Liberty Counsel’s legal team led by its founder Mat Staver have done an excellent job and we are optimistic that the court will rule in our favor. A decision is expected in June of this year.

The author with Pastor Earl Wallace of Schenectady, NY in front of the Federal