Approximately 50 students from an elite school on Long Island traveled hundreds of miles by bus to conduct a permitted protest across the campus from Newton South High School in late May to make their voices heard in their call for transparency and open-mindedness at the school.

The students of Rambam Mesivta, a nationally recognized Blue Ribbon school, took turns at the podium addressing some of the hot button issues being taught to students about Middle East politics, the history of Israel, and its Arab neighbors.

“Focusing on Arab casualties in wars which their armies or terrorist bands initiated, is very narrow-minded, lacks context and certainly can be interpreted as anti-Israel bias. We feel it is important for students in any school to be exposed to context and the whole picture,” said Binyamin Werner, a sophomore student in Rambam.

Based on public records and pending lawsuits, certain Newton residents feel that the perspectives and narratives that students are being exposed to are one-sided and feel that they are being taught by people with a specific agenda. They claim that the guise that the school uses to justify these biases is part of the plan to teach “critical thinking.” “Strangely and inconsistently, one does not find anti-black, anti-LGBTQ or anti-Muslim rhetoric being espoused with the hope that ‘critical thinkers’ will be able to identify the bias and combat it,“ said Rabbi Zev Friedman, the dean of the school who accompanied the boys on the rally. 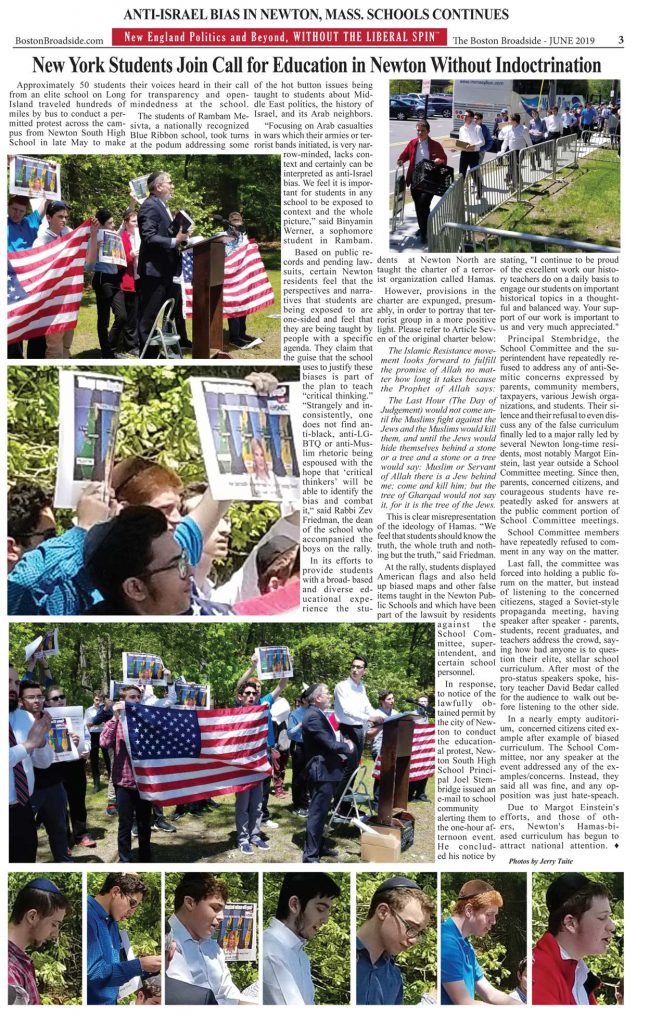 In its efforts to provide students with a broad- based and diverse educational experience the students  at Newton North are taught the charter of a terrorist organization called Hamas.

However, provisions in the charter are expunged, presumably, in order to portray that terrorist group in a more positive light. Please refer to Article Seven of the original charter below:

The Islamic Resistance movement looks forward to fulfill the promise of Allah no matter how long it takes because the Prophet of Allah says:

The Last Hour (The Day of Judgement) would not come until the Muslims fight against the Jews and the Muslims would kill them, and until the Jews would hide themselves behind a stone or a tree and a stone or a tree would say: Muslim or Servant of Allah there is a Jew behind me; come and kill him; but the tree of Gharqad would not say it, for it is the tree of the Jews.

This is clear misrepresentation of the ideology of Hamas. “We feel that students should know the truth, the whole truth and nothing but the truth,” said Friedman.

At the rally, students displayed American flags and also held up biased maps and other false items taught in the Newton Public Schools and which have been part of the lawsuit by residents against the School Committee, superintendent, and certain school personnel.

In response, to notice of the lawfully obtained permit by the city of Newton to conduct the educational protest, Newton South High School Principal Joel Stembridge issued an e-mail to school community alerting them to the one-hour afternoon event. He concluded his notice by stating, “I continue to be proud of the excellent work our history teachers do on a daily basis to engage our students on important historical topics in a thoughtful and balanced way. Your support of our work is important to us and very much appreciated.”

Principal Stembridge, the School Committee and the superintendent have repeatedly refused to address any of anti-Semitic concerns expressed by parents, community members, taxpayers, various Jewish organizations, and students. Their silence and their refusal to even discuss any of the false curriculum finally led to a major rally led by several Newton long-time residents, most notably Margot Einstein, last year outside a School Committee meeting. Since then, parents, concerned citizens, and courageous students have repeatedly asked for answers at the public comment portion of School Committee meetings.

School Committee members have repeatedly refused to comment in any way on the matter.

Last fall, the committee was forced into holding a public forum on the matter, but instead of listening to the concerned citizens, staged a Soviet-style propaganda meeting, having speaker after speaker – parents, students, recent graduates, and teachers address the crowd, saying how bad anyone is to question their elite, stellar school curriculum. After most of the pro-status speakers spoke, history teacher David Bedar called for the audience to  walk out before listening to the other side.

In a nearly empty auditorium,  concerned citizens cited example after example of biased curriculum. The School Committee, nor any speaker at the  event addressed any of the examples/concerns. Instead, they said all was fine, and any opposition was just hate-speech.

Due to Margot Einstein’s efforts, and those of others,  Newton’s  Hamas-biased curriculum has begun to attract national attention. ♦

Republicans “Led” by Kirsten Hughes Fail to Field a Candidate, Again Another election, another chance for the Massachusetts Republican Party (led by Kirsten “Marrionette” Hughes) to once again not even Read More…

Your Beacon Hill Representatives and Senators are More Expensive than You Think!

In the recently passed House version of the state budget, your elected officials approved $40,278,000 to operate the House side of the Legislature and $19,695,000 for the Senate side. Since Read More…