FROM OUR PRINTED NOV 2018 EDITION

Some signs show “Nurses say Yes On 1.” Other signs show “Nurses say No On 1.” TV ads by Yes proponents say it’s all about patient safety and that 86% of nurses favor it. Proponents of No try to convince us that some small hospitals may close because of the added costs, and wait times to see an emergency room doctor will be longer.

Question 1 on the November 6th ballot would set government-mandated requirements for the maximum number of patients per nurse in various medical units of a hospital. Heavy fines, up to $25,000, would be imposed on hospitals for each violation of these mandates.

The Committee to Ensure Safe Patient Care is the ballot committee running the “Yes On 1” campaign. The latest Office of Campaign and Finance (OCPF) report shows it had raised $9.10 million as of October 1st. Of that amount, $8.97 million or 98.7% was donated by the Massachusetts Nurses Association.

Raise Up Mass. was one of the leaders and leading fundraisers for the graduated income tax, $15/hour minimum wage and paid family leave ballot questions. The first was thrown out by the Massachusetts Supreme Judicial Court and the last two were withdrawn after Governor Charlie Baker negotiated a “grand bargain” which gave them almost everything they wanted. Also note that Raise Up Mass. was the key player in getting the Retailers Association of Massachusetts to withdraw its ballot question reducing the sales tax from 6.25% to 5%.

So Raise Up Massachusetts, of which the Massachusetts Nurses Association is a member, is all about redistribution of wealth – taking money from the more productive and giving it to the less productive.

So why would the Teamsters and Unite Here, a hotel and food service union, be interested in a ballot question on patient care? And why would a New York State Nurses Association send money to help Massachusetts patients?

The answer can be gleaned from the following list of organizations which support Question 1:

Show Me Your Stethoscope Foundation

Western Mass. Medicare for all

Newfoundland and Labrador Association of Public and Private Employees (NAPE)

Foundation for a Green Future

The Labor Guild, Archdiocese of Boston

There are some important points to note in this long list. First, under Nurses Nationwide many are from Canada where there is universal healthcare and where the wait times are long and the care is so good that Canadians come to the U.S. for health services when they can afford it. Other nurses associations are from out of state. Under Community Groups you see the words “social justice,” “socialist,” “progressive,” and “revolution.” Even the group “Resist the Pipeline.” Does anybody believe these are mainstream groups worried about safe patient care? You have got to be kidding.

And the last list of Labor and Working Families is mostly a list of unions, teachers, carpenters, steelworkers, machinists, pipefitters, bricklayers and so forth. Are all these unions concerned about safe patient care?

Have you figured it out yet? Question 1 is not about safe patient health. It’s all about jobs, jobs and more jobs. That’s why labor unions and the Democratic Party are behind this ballot measure.

But all these nurses that will have to be hired to increase staffing levels will be costly. In April the Massachusetts Health and Hospital Association, opponents to Question 1, commissioned an independent study on the cost, and  the report (http://tinyurl.com/ybr6gd6k) concluded that approval of this initiative could cost the healthcare system $1.31 billion the first year and $900 million/year thereafter.

On October 3rd, the Massachusetts Health Policy Commission (MHPC) released its own report (http://tinyurl.com/ybkgkd74) on Question 1 and concluded that if passed the provisions would cost $676 to $949 million/year. MHPC also looked at California’s government-mandated patient to nurse ratio law which was passed in 1999, and concluded that although California had to significantly increase nurse staffing, there was “no systemic improvement in patient outcomes.”

Proponents of Question 1, of course, had their own study (http://tinyurl.com/yb7ap6vy) done by a professor at the Boston College School of Nursing and she came up with a figure of $47 million for implementation.

Whatever the numbers are, and it looks like they will be closer to the $900 million mark than the $47 million, someone will have to pay for it if Question 1 passes. And first in line is the hospital that has to hire the extra nurses. That cost will then be passed on to the patients, insurance companies and government agencies like MassHealth, Medicare and so forth. If any of these resist the higher costs, that will put pressure on the hospitals and medical centers to change behavior such as cutting back on services or eliminating entire departments. Some already on the edge of breaking even may even be forced to shut down. This is not a threat but a reality.

Back to California for a minute. California was the first and is the only state to pass comprehensive government-mandated patient-to-nurse staffing limits. It is also used as a benchmark by proponents for the Massachusetts ballot initiative. Here is a comparison of the two plans: 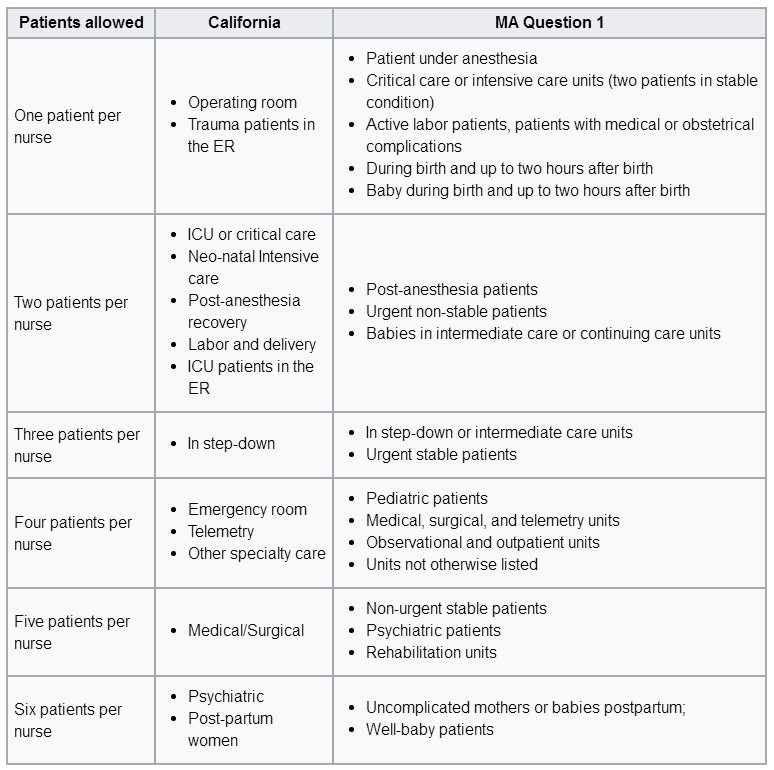 It’s a little hard to sort out and compare Question 1 to California, but if you look closely you will see that the Massachusetts’ initiative is even more stringent than the California law and would require even more nurses. For example, labor and delivery is two patients per nurse in California but is only one patient per nurse in Massachusetts.

So how did this whole Question 1 thing get started?

Late in the fall of 2017 the Committee to Ensure Safe Patient Care submitted the Question 1 language along with 75,542 certified signatures to Secretary of State Bill Galvin’s office.

You remember seeing hundreds of nurses gathering signatures out in front of supermarkets and post offices, don’t you? You don’t? Well, maybe that’s because the nurses weren’t out collecting signatures. The Committee to Ensure Safe Patient Care contracted with JEF Associates to collect the signatures and paid them handsomely – $570,518. That’s $7.55 per signature of Nurses Association money.

In contrast, Question 2 on the ballot, about a commission to recommend overturning a Supreme Court decision, paid only $2.03 per signature.

When you have lots of money, money is no object to getting what you want.

So, what is the opposition to Question 1?

The Coalition to Protect Patient Safety was formed to oppose the patient-to-nurse government mandate. It has raised $13.35 million as of October 1st, $12.68 million provided by the Massachusetts Health & Hospital Association, or 94.97%. The remaining donors were mostly Massachusetts hospitals and medical centers, but the Organization of Nurse Leaders donated $44,059 to the effort. The donor hospitals ranged from the well-known Boston medical institutions to the small, rural medical centers, and even the religious hospitals. In-kind expenditures, mostly from hospitals, have added another million dollars to the effort to defeat Question 1.

So, who else opposes Question 1? Here is a list of groups and organizations supporting the opposition:

Partnership for Health in the Berkshires

East of the River 5 Town Chamber of Commerce

And look at the quality and professionalism of the organizations. There are no long lists of political town committees. There are no social justice groups or activists looking for power and glory. Nobody trying to stop a pipeline in this group.

Which group do you think better represents what’s in our best interest for the Massachusetts healthcare system? Then you will know how to vote on November 6th.

Tank the Olympic Tax Committee held a “Bacon Hill Night of Crime” at the Ever-So-Humble Pie Company.  by Ted Tripp Political Reporter The first thing you notice when you walk Read More…

2 Replies to “Ballot Question 1: Government Mandated Nurse Staffing at Hospitals All About Money, Jobs and Power”