FROM OUR PRINTED JUNE 2022 EDITION

It seems no one can help him. Lawyers cost money. He doesn’t have it. He got put in prison on weak, selectively presented “evidence” and the lies of his druggie sister. That’s the information David Coutu has shared, along with about 20 pounds of documents, personal writings, and many phone conversations from Shirley Prison.

He was represented by a public defender who apparently thought David was a dope and was guilty. The defense was virtually non-existent. Witnesses were not called, evidence was not presented, other evidence was allowed to be presented in a skewed fashion, and everyone ignored everything the rape victim, Ms. Chiu, said to police, except when, a year later in a closed courtroom, she was asked to identify the only guy in the room who looked like a prisoner, she finally said: “Okay. Yes, that is the person. I can recognize his energy because of my trade of work.”

Ms. Chiu is a psychic. She discarded all prior descriptions of her attacker and instead relied on her psychic abilities to identify the one guy before her. And the judge let that spectral evidence serve as “positive identification.” Yes, it was a female judge.

“I have been convicted and sentenced [to] 35 to 40 years for a series of offenses that all stems from one crime that I absolutely had not committed,” wrote David Coutu in one of several detailed letters to the Boston Broadside. We have a pile of court documents, personal letters, photographs, police reports, witness statements, and related information, and were not surprised that much of what David was able to amass over the past 16 years while incarcerated was NOT introduced at trial. We call it “selective prosecution” where the jury gets to hear what the state’s prosecutor wants them to hear, and a weak public defender, apparently convinced his client is guilty, throws the match.

“I had been framed due to a miscommunication – falsified to of been involved between a love triangle,” David shared. “Mistaken identity due to a mix-up in names and ages, someone had reported to a boyfriend of a bisexual girlfriend that she and I had something going on between us. The truth is, it was my younger brother Jimmy involved, not me.”

David has since detailed to us that that love triangle, and a pathological lying sister of his (he’s one of eight children) turned David’s life to hell. Pathological is how David described what both he and his mother detailed in multiple conversations as well as in various documents David’s sister, Eleanor. In addition to drug and alcohol issues, Eleanor’s involvement with certain fellow lowlifes and a certain Level 3 sex offender brought sadness to David’s mother who related what a tragic liar her daughter Eleanor is. But just as damning, Eleanor’s daughter (who had been under DCF custody at the time) tried to save David – by presenting evidence that her mother Eleanor was lying, but the courts refused to listen to her, nor provide the jury with a written affidavit which blows holes in Eleanor’s various conflicting stories about David.

Here’s a Bird’s Eye look at the case, recapping some information from Parts 1 and 2 of this series, and introducing some new items: 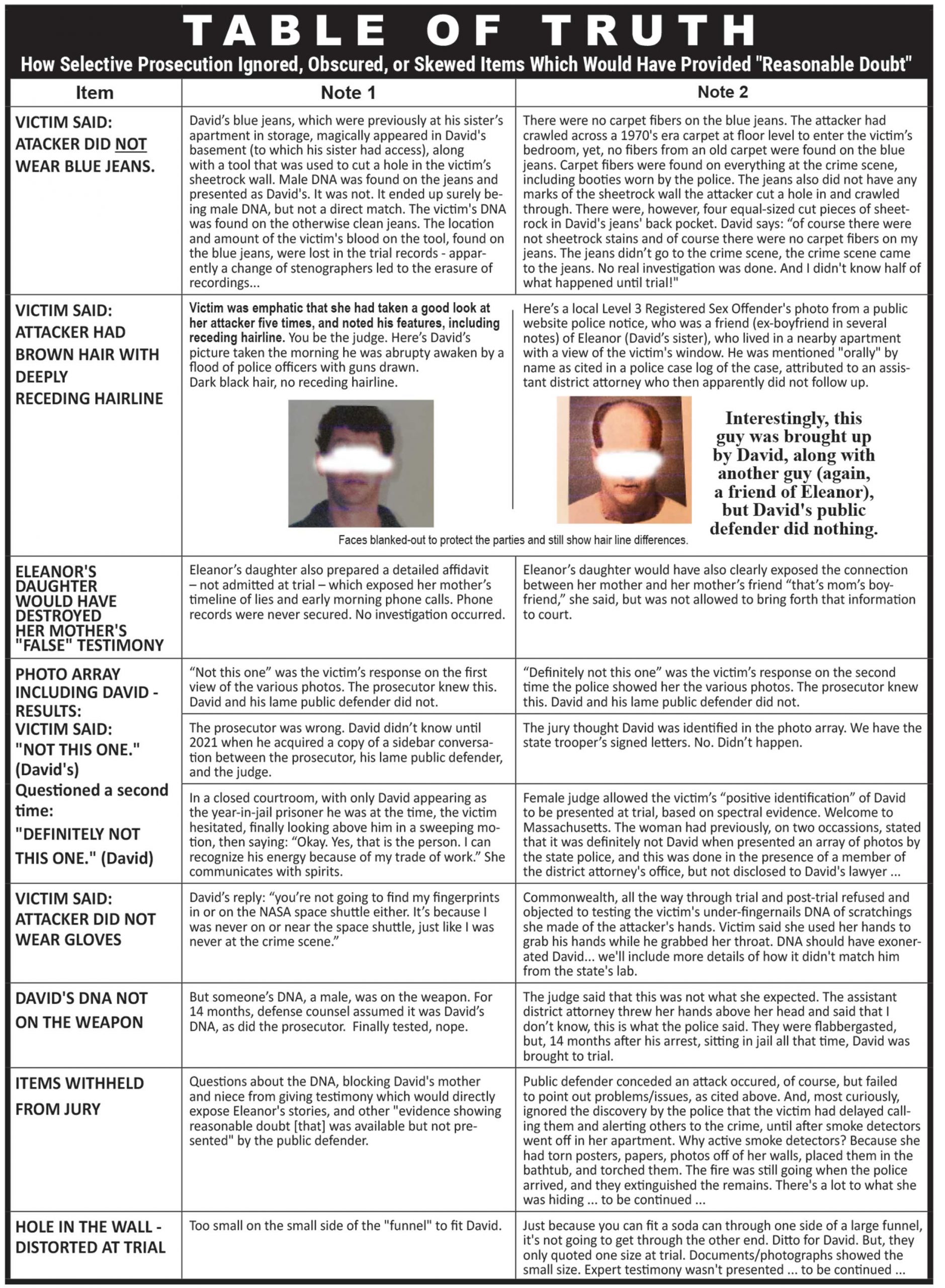