FROM OUR PRINTED MAY 2022 EDITION

On March 23, 2022, the five elected New Hampshire Executive Councilors refused to consider a request for consideration of commutation (chance for parole) for Pamela Smart. They took a quick vote and ran from the issue.

Smart’s attorney, Mark Sisti of Sisti Law Offices in Chichester, N.H., didn’t find that right, fair, nor in compliance with the New Hampshire State Constitution, so he’s requesting the courts to weigh in.

To many, the name Pamela Smart causes a flashback of some long-ago, media-circus trial and thoughts of a 21-year-old girl accused with conspiring to murder her husband. If you lived in New Hampshire or any part of New England, or beyond, chances are you were saturated with the trial. Media crews descended upon the Granite State from as far away as Australia and Japan. You knew about the trial. You knew some high school buddies executed her husband and blamed Pamela Smart for putting them up to it. You might not have known they were involved in drugs, ransacked the Smart’s condo, fenced various items, etc., as the focus was on prosecuting Pamela. 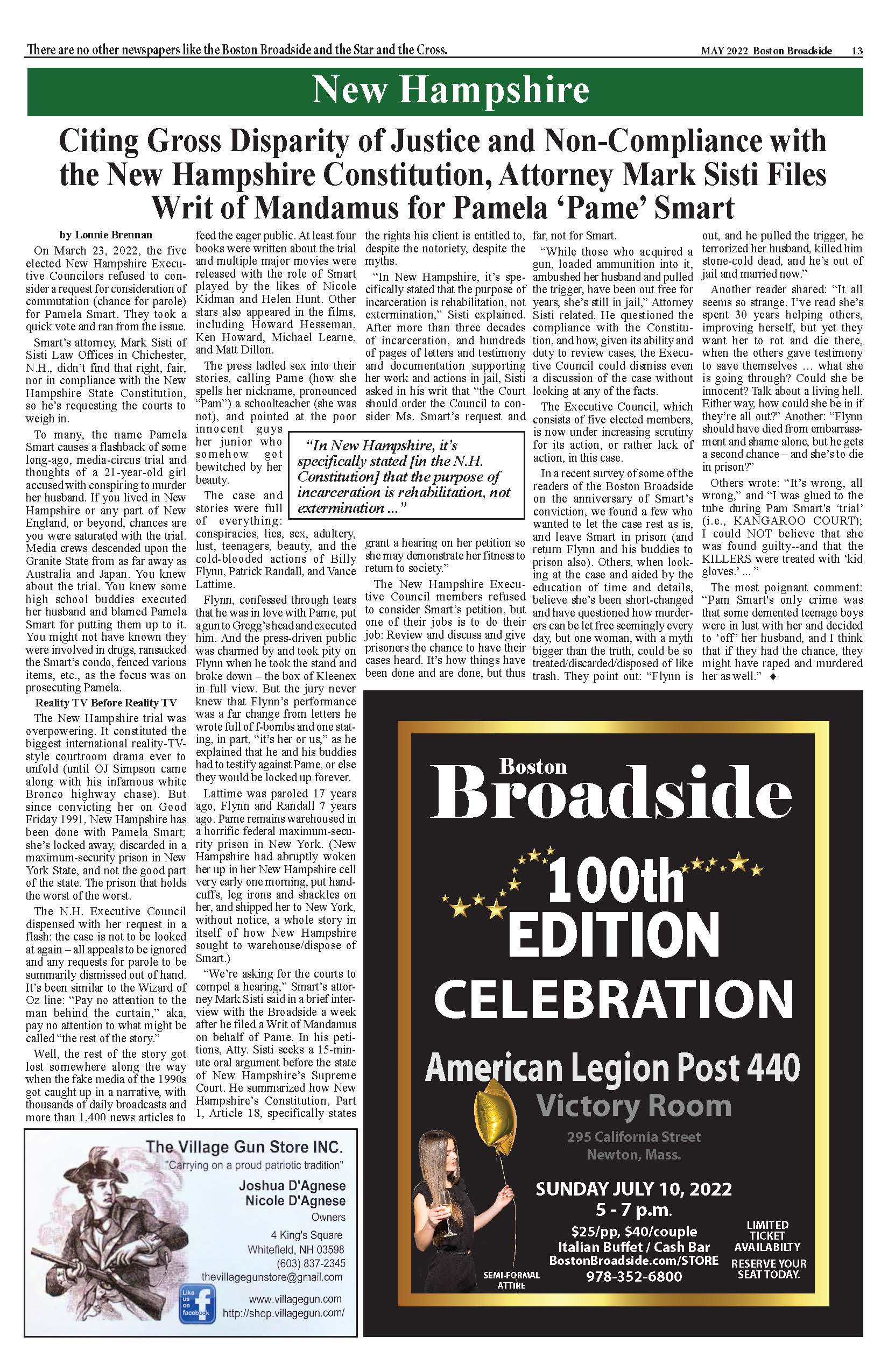 The New Hampshire trial was overpowering. It constituted the biggest international reality-TV-style courtroom drama ever to unfold (until OJ Simpson came along with his infamous white Bronco highway chase). But since convicting her on Good Friday 1991, New Hampshire has been done with Pamela Smart; she’s locked away, discarded in a maximum-security prison in New York State, and not the good part of the state. The prison that holds the worst of the worst.

The N.H. Executive Council dispensed with her request in a flash: the case is not to be looked at again – all appeals to be ignored and any requests for parole to be summarily dismissed out of hand. It’s been similar to the Wizard of Oz line: “Pay no attention to the man behind the curtain,” aka, pay no attention to what might be called “the rest of the story.”

Well, the rest of the story got lost somewhere along the way when the fake media of the 1990s got caught up in a narrative, with thousands of daily broadcasts and more than 1,400 news articles to feed the eager public. At least four books were written about the trial and multiple major movies were released with the role of Smart played by the likes of Nicole Kidman and Helen Hunt. Other stars also appeared in the films, including Howard Hesseman, Ken Howard, Michael Learne, and Matt Dillon.

The press ladled sex into their stories, calling Pame (how she spells her nickname, pronounced “Pam”) a schoolteacher (she was not), and pointed at the poor innocent guys her junior who somehow got bewitched by her beauty.

The case and stories were full of everything: conspiracies, lies, sex, adultery, lust, teenagers, beauty, and the cold-blooded actions of Billy Flynn, Patrick Randall, and Vance Lattime.

Flynn, confessed through tears that he was in love with Pame, put a gun to Gregg’s head and executed him. And the press-driven public was charmed by and took pity on Flynn when he took the stand and broke down – the box of Kleenex in full view. But the jury never knew that Flynn’s performance was a far change from letters he wrote full of f-bombs and one stating, in part, “it’s her or us,” as he explained that he and his buddies had to testify against Pame, or else they would be locked up forever.

Lattime was paroled 17 years ago, Flynn and Randall 7 years ago. Pame remains warehoused in a horrific federal maximum-security prison in New York. (New Hampshire had abruptly woken her up in her New Hampshire cell very early one morning, put handcuffs, leg irons and shackles on her, and shipped her to New York, without notice, a whole story in itself of how New Hampshire sought to warehouse/dispose of Smart.)

“We’re asking for the courts to compel a hearing,” Smart’s attorney Mark Sisti said in a brief interview with the Broadside a week after he filed a Writ of Mandamus on behalf of Pame. In his petitions, Atty. Sisti seeks a 15-minute oral argument before the state of New Hampshire’s Supreme Court. He summarized how New Hampshire’s Constitution, Part 1, Article 18, specifically states the rights his client is entitled to, despite the notoriety, despite the myths.

“In New Hampshire, it’s specifically stated that the purpose of incarceration is rehabilitation, not extermination,” Sisti explained. After more than three decades of incarceration, and hundreds of pages of letters and testimony and documentation supporting her work and actions in jail, Sisti asked in his writ that “the Court should order the Council to consider Ms. Smart’s request and grant a hearing on her petition so she may demonstrate her fitness to return to society.”

The New Hampshire Executive Council members refused to consider Smart’s petition, but one of their jobs is to do their job: Review and discuss and give prisoners the chance to have their cases heard. It’s how things have been done and are done, but thus far, not for Smart.

“While those who acquired a gun, loaded ammunition into it, ambushed her husband and pulled the trigger, have been out free for years, she’s still in jail,” Attorney Sisti related. He questioned the compliance with the Constitution, and how, given its ability and duty to review cases, the Executive Council could dismiss even a discussion of the case without looking at any of the facts.

The Executive Council, which consists of five elected members, is now under increasing scrutiny for its action, or rather lack of action, in this case.

In a recent survey of some of the readers of the Boston Broadside on the anniversary of Smart’s conviction, we found a few who wanted to let the case rest as is, and leave Smart in prison (and return Flynn and his buddies to prison also). Others, when looking at the case and aided by the education of time and details, believe she’s been short-changed and have questioned how murderers can be let free seemingly every day, but one woman, with a myth bigger than the truth, could be so treated/discarded/disposed of like trash. They point out: “Flynn is out, and he pulled the trigger, he terrorized her husband, killed him stone-cold dead, and he’s out of jail and married now.”

Another reader shared: “It all seems so strange. I’ve read she’s spent 30 years helping others, improving herself, but yet they want her to rot and die there, when the others gave testimony to save themselves … what she is going through? Could she be innocent? Talk about a living hell. Either way, how could she be in if they’re all out?” Another: “Flynn should have died from embarrassment and shame alone, but he gets a second chance – and she’s to die in prison?”

Others wrote: “It’s wrong, all wrong,” and “I was glued to the tube during Pam Smart’s ‘trial’ (i.e., KANGAROO COURT); I could NOT believe that she was found guilty–and that the KILLERS were treated with ‘kid gloves.’ … ”

The most poignant comment: “Pam Smart’s only crime was that some demented teenage boys were in lust with her and decided to ‘off’ her husband, and I think that if they had the chance, they might have raped and murdered her as well.”   ♦ 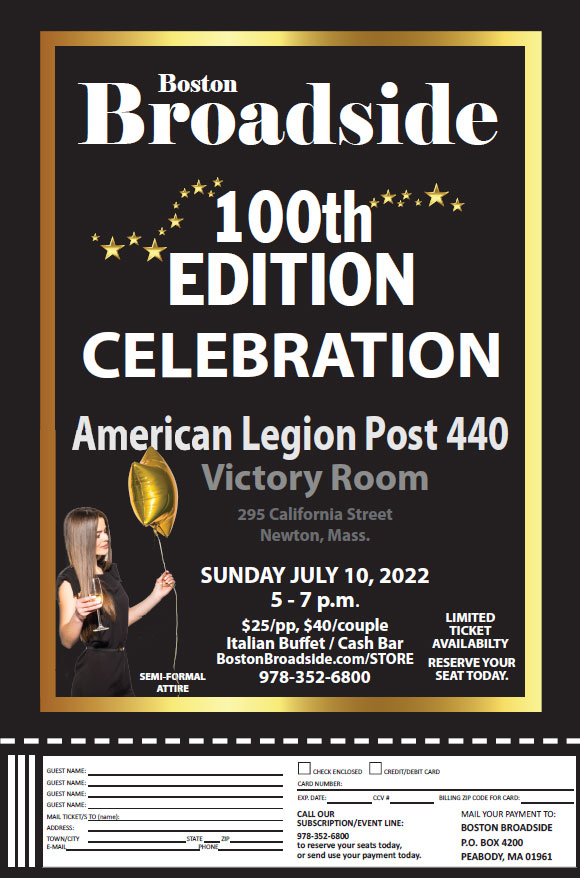 FROM OUR PRINTED MARCH, 2022 EDITION: by Lonnie Brennan Elizabeth J. Hebert is 93 years of age. We spoke with her on multiple occasions these past few months. During those Read More…