by Ginny Gardner
Chair, Keep Newton Safe
As chairperson of the “Keep Newton Safe” ad hoc committee, I am writing to support the No Sanctuary City Newton.
We support our mayor, council president, and chief of police. Ord. (443-16), docketed by Mayor Setti Warren, Council President Scott Lennon, City Councilor David Kalis and Chief of Police David MacDonald. This ordinance does not prohibit our police officers from doing their job, and will not risk the loss of valuable federal grant money, approximately $12.2 million. That will be permanently lost (as guaranteed by President-elect Trump).
The ordinance proposed by some members of the Newton City Council, (443-16(2), is deeply concerning. This ordinance forces our police, firefighters, all law enforcement officials, and all elected officials to violate their oath of office. It allows the city of Newton to pick and choose just what laws we want to obey and honor. It threatens the immediate loss of over $12.2 million in federal grant money.
Think about Newton Schools
We estimate over $3 million goes directly to our Newton schools. This loss of $3 million will severely impact critical programs for our students, our children. Every aspect of day-to-day life will be threatened.
Federal money provides much needed services, not just for our schools/students, but for fire, police, roads, and many of the services our seniors so desperately need.
City Employees Will be Forced to Violate Oath of Office
If passed, any city employee who takes an oath of office will immediately be breaking the law and be in violation of his/her oath. The ordinance, in part, reads: “No city official will report to or COOPERATE with I.C.E.,  Immigration Customs Enforcement.” This will restrict police work and put community safety at risk.
Taxes Will Increase
Making Newton a Sanctuary City, Ord. 443-16(2), will result in striping Newton of $12.2 million in federal grant money. Newton taxpayers are not in the position to make up this drastic loss of revenue or to forfeit our many, vitally important services and programs provided to our school children. Join us January 18, 2017, 7:00 p.m., room 209, Newton City Hall, to Keep Newton Safe.   ♦ 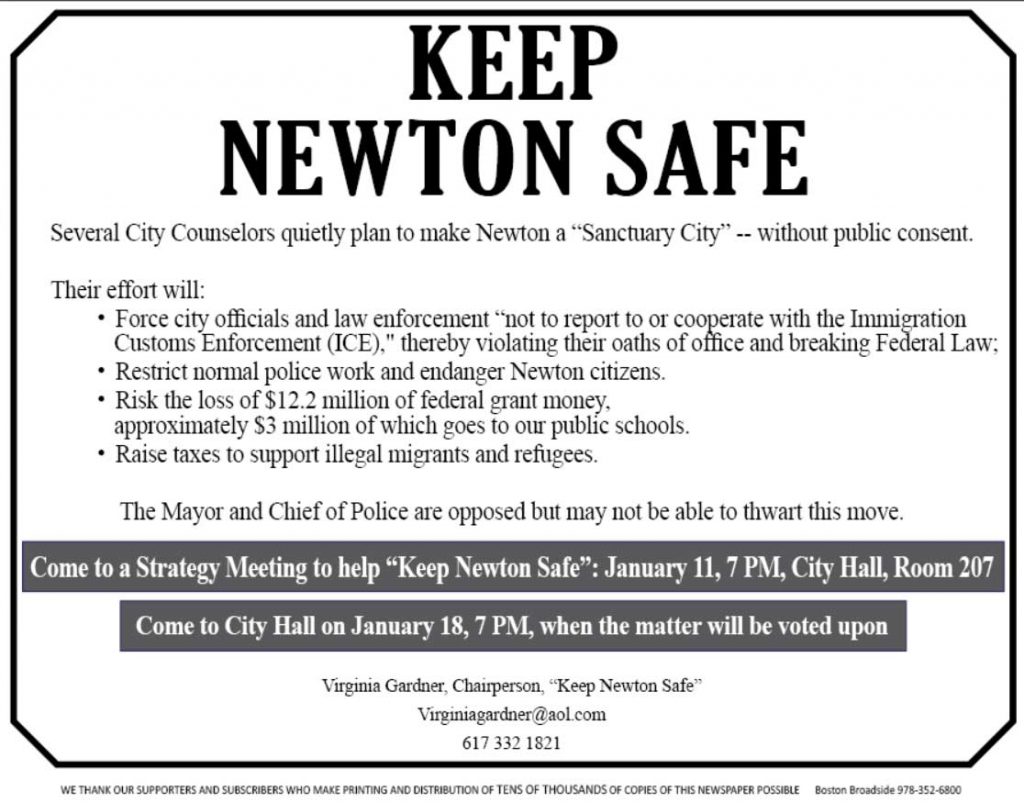