FROM OUR PRINTED JULY 2018 EDITION

“The following on-air interview was conducted in mid-June. Listen to the Kuhner Report – Jeff Kuhner – on WRKO 680 AM radio, or steaming at www.WRKO.com, weekdays from noon until 3:00 p.m. for the best national and local news, discussions, and live interviews this election season.”

Jeff Kuhner: But first, we are now joined by Dr. Scott Lively. He is the Republican candidate to challenge Governor Charlie Baker in the GOP primary. Dr. Lively, thank you so much for coming on the Kuhner Report.

Scott Lively: Oh, it’s so good to be back with you, Jeff.

Scott Lively: Well, first of all, I’m absolutely, 100%, no compromise supporter of the 2nd Amendment. I’m a Constitutional Law attorney, a Constitutional originalist. I believe that The Bill of Rights, those 10 Amendments, is the document that really distinguishes the United States of America from every other country in the world, and it’s why we are the first, best, and longest-lasting Constitutional republic in the history of the world.

Jeff Kuhner: Now, I believe you are attending a conference, however, right, that’s going to be talking about these issues?

Scott Lively: Yes. We’re going to have a 2nd Amendment rally. I’m going to be there doing the opening comments and delivering a prayer as a member of the Black Robe Regiment. Some of your listeners will know what that means. The clergy, during the Revolutionary War, were called the Black Robe Regiment by the British, which were actually terrified of the influence that the clergy had on the continental militia. That’s how they got the name Black Robe Regiment, because of course they wore black robes. That will be at the Swift River Sportman’s Club in Belchertown this Saturday all day long, starting at 10 o’clock in the morning. I’ll be there for that purpose, and I will have a campaign table there. I’m asking conservatives from all over Massachusetts to come to that event, it’s a free event, and join us there, and enlist in the grassroots army that we are assembling in order to take back this state from the far left. 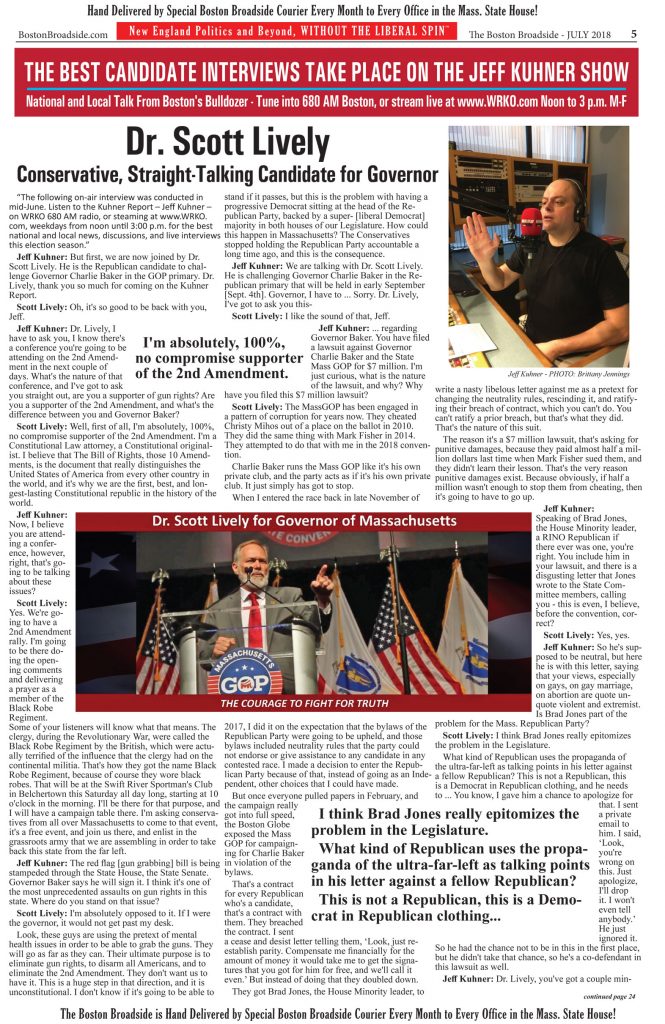 Jeff Kuhner: The red flag [gun grabbing] bill is being stampeded through the State House, the State Senate. Governor Baker says he will sign it. I think it’s one of the most unprecedented assaults on gun rights in this state. Where do you stand on that issue?

Scott Lively: I’m absolutely opposed to it. If I were the governor, it would not get past my desk.

Look, these guys are using the pretext of mental health issues in order to be able to grab the guns. They will go as far as they can. Their ultimate purpose is to eliminate gun rights, to disarm all Americans, and to eliminate the 2nd Amendment. They don’t want us to have it. This is a huge step in that direction, and it is unconstitutional. I don’t know if it’s going to be able to stand if it passes, but this is the problem with having a progressive Democrat sitting at the head of the Republican Party, backed by a super- [liberal Democrat] majority in both houses of our Legislature. How could this happen in Massachusetts? The Conservatives stopped holding the Republican Party accountable a long time ago, and this is the consequence.

Jeff Kuhner: We are talking with Dr. Scott Lively. He is challenging Governor Charlie Baker in the Republican primary that will be held in early September [Sept. 4th]. Governor, I have to … Sorry. Dr. Lively, I’ve got to ask you this-

Scott Lively: I like the sound of that, Jeff.

Jeff Kuhner: … regarding Governor Baker. You have filed a lawsuit against Governor Charlie Baker and the State Mass GOP for $7 million. I’m just curious, what is the nature of the lawsuit, and why? Why have you filed this $7 million lawsuit?

Scott Lively: The MassGOP has been engaged in a pattern of corruption for years now. They cheated Christy Mihos out of a place on the ballot in 2010. They did the same thing with Mark Fisher in 2014. They attempted to do that with me in the 2018 convention.

When I entered the race back in late November of 2017, I did it on the expectation that the bylaws of the Republican Party were going to be upheld, and those bylaws included neutrality rules that the party could not endorse or give assistance to any candidate in any contested race. I made a decision to enter the Republican Party because of that, instead of going as an Independent, other choices that I could have made.

But once everyone pulled papers in February, and the campaign really got into full speed, the Boston Globe exposed the Mass GOP for campaigning for Charlie Baker in violation of the bylaws.

That’s a contract for every Republican who’s a candidate, that’s a contract with them. They breached the contract. I sent a cease and desist letter telling them, ‘Look, just re-establish parity. Compensate me financially for the amount of money it would take me to get the signatures that you got for him for free, and we’ll call it even.’ But instead of doing that they doubled down.

They got Brad Jones, the House Minority leader, to write a nasty libelous letter against me as a pretext for changing the neutrality rules, rescinding it, and ratifying their breach of contract, which you can’t do. You can’t ratify a prior breach, but that’s what they did. That’s the nature of this suit.

The reason it’s a $7 million lawsuit, that’s asking for punitive damages, because they paid almost half a million dollars last time when Mark Fisher sued them, and they didn’t learn their lesson. That’s the very reason punitive damages exist. Because obviously, if half a million wasn’t enough to stop them from cheating, then it’s going to have to go up.

Jeff Kuhner: Speaking of Brad Jones, the House Minority leader, a RINO Republican if there ever was one, you’re right. You include him in your lawsuit, and there is a disgusting letter that Jones wrote to the State Committee members, calling you – this is even, I believe, before the convention, correct?

Jeff Kuhner: So he’s supposed to be neutral, but here he is with this letter, saying that your views, especially on gays, on gay marriage, on abortion are quote unquote violent and extremist. Is Brad Jones part of the problem for the Mass. Republican Party?

Scott Lively: I think Brad Jones really epitomizes the problem in the Legislature.

What kind of Republican uses the propaganda of the ultra-far-left as talking points in his letter against a fellow Republican? This is not a Republican, this is a Democrat in Republican clothing, and he needs to … You know, I gave him a chance to apologize for that. I sent a private email to him. I said, ‘Look, you’re wrong on this. Just apologize, I’ll drop it. I won’t even tell anybody.’ He just ignored it. So he had the chance not to be in this in the first place, but he didn’t take that chance, so he’s a co-defendant in this lawsuit as well.

Jeff Kuhner: Dr. Lively, you’ve got a couple minutes left. I’ve got to ask you now, really in many ways, the ultimate question. The Boston Globe has been urging Charlie Baker the Governor to debate you. They say, according to the Globe, that you are such an extremist, you are so radical on gays, on homosexual marriage, on social issues, that Baker should not only quote debate you, but quote demolish you. Do you want to debate Governor Charlie Baker, and where would you like to debate him?

Scott Lively: Well you know, Jeff, this is so important to me and I think to the voters as well, that I think that I would cream Charlie Baker in a debate, and I think that the reason he won’t debate me is that he knows that also.

So what I’ve done, actually, I sent a letter yesterday. It arrived in his office this morning. I’ve offered to actually dismiss my lawsuit, and all the co-defendants, if Charlie Baker will step up, mano-a-mano and debate me three times on live television, I’ll drop the whole thing, because I believe those debates would hand me the election. I would have the opportunity to be able to confront him on the things that he’s done against conservatism, and I think the people would have a chance to see that there’s a real, genuine conservative Republican in this race because of those debates.

I made that offer. I’ll drop the $7 million lawsuit, and all he’s got to do is do what he should be doing anyway, and debate me on live television.

Jeff Kuhner: Do you think Baker has the guts? Does the Governor have to guts to debate you, not even three times, just one time, for let’s say a 60-90 minute debate? Does he have it in him?

Scott Lively: I don’t know that he does. What I suspect is that he doesn’t. But what this really is going to demonstrate is that Charlie is all about Charlie. Here I’m giving him an opportunity to let all of his friends, these are people that think Charlie’s their friend, these people that have been sticking their neck out and thought because he’s the head of this team that’s been engaging in all this corrupt behavior, and they’ve been going along because Charlie’s their guy. And here, he’s being given an opportunity to be able to get them out of legal jeopardy by stepping up, by manning up and taking me on man-to-man in a public debate.

Jeff Kuhner: We have been talking with Dr. Scott Lively. He is a Republican Primary challenger against Governor Charlie Baker. Dr. Lively, I’ve got 30 seconds left. Where can people go to find out more information about you and your campaign?

Scott Lively: Votelively.com is our website. Votelively.com. I would encourage everybody listening to come to Belchertown on Saturday. The 2nd Amendment rally, we want all the Conservatives to be there. We’re getting organized. You know, Mark Fisher could have won the 2014 election with just 80,000 votes. A good grassroots network could do that in their sleep, so we’re organizing that grassroots network. We’re going to take the primary, and we’re going to flip Massachusetts red.

Jeff Kuhner: We have been talking with Dr. Scott Lively. Dr. Lively, thank you so much for coming on the Kuhner Report.

Scott Lively: Thank you, Jeff. I appreciate you.

God bless all your listeners.  ♦

Salem’s Liberal Witch Hunt Mayor Kim Driscoll’s thugs target her critics By Jeffrey T. Kuhner  There is a new witch hunt in Salem. This time the victims are opponents of Read More…

[SEND A MESSAGE to Baker: VOTE SCOTT LIVELY] Liberal judge has blood on his hands for Marine’s death