The liberal lynching of Kanye West

Media is attacking the pop star for supporting Trump

Kanye West is being denounced as mentally ill and a race traitor. The famous singer’s crime: He supports President Trump. For this, the liberal media is vilifying Kanye.

Upon hearing that Kanye on Thursday was to have lunch with Trump in the White House, CNN unleashed a barrage of vicious attacks—many of them blatantly racist.

“Kanye West is what happens when negroes don’t read,” said CNN commentator Bakari Sellers. “Donald Trump is going to use it and pervert it, and he’s going to have somebody who can stand with him and take pictures.”

“Black folks are about to trade Kanye in the racial draft,” said CNN commentator Tara Setmayer. “They’ve had it with him. He’s an attention whore like the president. He’s … the token negro of the Trump administration.”

She added: “No one should be taking Kanye West seriously. He clearly has issues; he’s already been hospitalized.”

In other words, media elites are smearing Kanye as a modern-day Uncle Tom, who is not only a traitor to blacks but a whack job suffering from severe mental pathologies. The aim of this line of attack is simple: character assassination. The liberal media is trying to do to Kanye what it did to Brett Kavanaugh—ruin and destroy his reputation.

The reason is obvious. Kanye is a self-made billionaire, a cultural icon and hero to millions of Americans both young and black. His embrace of Trump poses a mortal threat to Democratic rule and liberal hegemony. For Democrats to win national elections, they need to capture at least 90 percent of the African-American vote. For example, this was key to Barack Obama’s successive presidential victories. If Republicans, however, can peel away 12 or even 15 percent of the black vote, the Democrats are finished. Their political coalition would collapse—and with it any hope of winning a presidential election again.

This is why the Trump-Kanye alliance is so dangerous to the left. By openly backing Trump and his America First agenda, Kanye is signaling to black and young voters everywhere: It’s OK to support the president. In fact, it is even culturally chic—cool—to do so. 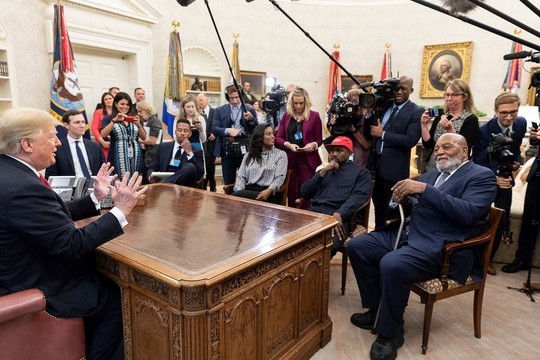 Moreover, Kanye is not intimidated by the Democratic-media complex. He marches to the beat of his own drummer. When he finally met Trump at the Oval Office in front of a hostile press corps, a defiant Kanye doubled down on his belief in nationalist-populism. He rightly praised Trump’s policies of economic growth, protectionism and rebuilding our inner cities. In fact, Kanye pointed to Trump’s signature successes: record low unemployment among blacks and the restoration of manufacturing jobs.

For all of his flaws (and I am not a fan of his music or his wife), Kanye has never forgotten his roots or where he comes from. He loves Chicago; he sees that the south side of Chicago has become a killing field for African-Americans. As Kanye bravely put it, considerably more blacks are killed by each other than by police officers. He understands that race-baiting, racial division and black victimology are poisonous not only to African-Americans, but to the country. This is why he champions “one America.”

Yet, the media refused to focus on his pro-Trump, patriotic message. Instead, they eviscerated him. CNN’s never-Trump faux conservative, S.E. Cupp, claimed that Trump “exploited” Kanye. MSNBC’s Stephanie Ruhle said “it was an assault on the White House.” The reason? During his 10-minute commentary, Kanye referred to himself as a “crazy motherf—–.” In other words, he dropped the f-bomb. Hence, our media elites attacked him—and Trump—for “degrading” the Oval Office and the “integrity” of the presidency.

The mainstream media (as usual) are hypocrites. Kanye is not the first person to use obscenities in the West Wing. More importantly, Obama and First Lady Michelle regularly threw lavish parties and concerts at the White House, featuring top hip hop singers and rappers who used much worse profanity than Kanye did—including the n-word. Also, forget the f-bomb, where was the media outrage when Bill Clinton turned the Oval Office into his bordello, in which his intern was sexually servicing him from underneath the desk? They have no moral authority to lecture Trump—or Kanye (or anyone)—about integrity and decency in the White House.

Kanye is the one thing Democrats fear: an African-American who thinks for himself—a true independent. He is someone who is not afraid to leave the Democratic economic plantation. Contrary to liberal myth, Democrats are the party of slavery and Jim Crow. In the past, liberals would wear white hoods and lynch uppity blacks who dared to speak out against Democratic misrule and injustice.

Today, Democratic racism is less crude and violent, but nonetheless, still devastating. Leftists at “Saturday Night Live” will put Kanye out on stage to sing, knowing that the liberal mob in the audience will jeer, boo and humiliate him. CNN and MSNBC will defame him as a “token negro” or a mentally defective illiterate. The effect, however, is the same. A proud black man is laid low; he is dehumanized, degraded and destroyed. Kanye is the victim of a high-tech lynching.

-Jeffrey T. Kuhner is host of “The Kuhner Report” on WRKO AM-680. His show airs Monday to Friday from noon-3:00 pm EST. He can be reached at: jeffreykuhner@iheartmedia.com

Kuhner’s Corner: Americans are Dreamers too Who cries for Colts linebacker killed by illegal alien drunk driver? By Jeffrey T. Kuhner   Edwin Jackson was a linebacker for the Read More…

Rachael Rollins Must Resign; Suffolk DA is a Dangerous Race-Baiter

What’s wrong with Massachusetts? Liberal judges coddle and defend dangerous criminals By Jeffrey T. Kuhner Is it something in the water? Why do so many judges in Massachusetts put the Read More…