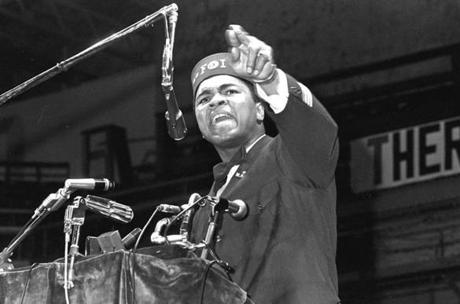 Why the media lies about Ali

The establishment media is painting a false picture of Muhammad Ali. The late boxing champion is being portrayed as “The Greatest.” He is supposedly the finest athlete, boxer and—maybe even—American of the 20th century. Media outlets have not only been celebrating his life and numerous athletic accomplishments, but deifying him.

I normally do not like to write anything critical about someone who has just passed away. It’s bad taste. Family members and friends deserve to mourn those they have lost with dignity and decorum. The best parts of a person’s life should be honored and commemorated. But the media’s wall-to-wall coverage, especially its deliberate attempt to lionize and glorify Ali while simultaneously rewriting the past, is propaganda bordering on Orwellian. In short, the liberal media is peddling blatant lies—and they must be exposed.

Contrary to myth, Ali was not the “greatest” athlete or boxer of the last hundred years. He was not even the greatest heavyweight. Joe Louis was better and held the title much longer; Rocky Marciano was tougher and remained undefeated; and the young Mike Tyson (in his prime) was stronger and would have demolished Ali. The 3-time champion was definitely a great fighter. He possessed lightning speed, a superb left jab and an underrated toughness. Ali had an iron jaw; he could take a punch. In fact, it was his ability to absorb large amounts of punishment that brought on the early dementia and Parkinson’s syndrome that plagued him for over 30 years.

But he was not some black superman. In fact, Ali was the creation of the liberal mass media. The American left needed someone to prop up—a celebrity, a sports hero, a cultural icon—and Ali was their man. They loved him for one simple reason: He opposed the Vietnam War. His refusal to serve and decision to declare himself a conscientious objector was celebrated by the anti-war movement. Ali was portrayed as a martyr, a victim of an oppressive system, who lost three years during his prime—and countless fights and prize money—in defense of his so-called “humanitarian” principles. This is the same narrative being pushed by the leftist media class today. It is nonsense.

Ali was an anti-American coward, who despised his country to such an extent that he argued it had no claim to his loyalty. This is why he would not serve in Vietnam. Ali was a deep-seated racist. He ferociously opposed the idea of a color-blind society. He was a virulent black separatist, who refused to defend what he called a white racist regime. Ali would take America’s money and use its unparalleled opportunities to amass vast sums of wealth, but not fight under its flag. He was a prominent member of the Nation of Islam, a vile hate group founded by Elijah Muhammad. The black Muslims preached more than black power and self-help. They expressed a doctrine of racial purity and hatred of whites and Jews. Black Muslims espoused violence. They decried the United States as an illegitimate power based on genocide, slavery and colonialism. Ali himself raged against miscegenation, arguing that interracial marriage would lead to the destruction of the black race—a fact conveniently being ignored by his eulogizers in the press.

It did not take “courage” to refuse the draft. Ali took the easy way out. The real heroes were the brave men who did fight in Vietnam—especially, the nearly 58,000 boys who never returned home. They paid the ultimate price. And as our young men were being drafted and fighting—and dying—in the jungles of Southeast Asia, Ali was being feted by the likes of Howard Cosell and driven around in chauffeured limousines giving anti-war speeches in front of adoring crowds at university campuses across the country. He was not some American legend who sacrificed so much for his supposed pacifist ideals; rather, he was a slick conman whose loathing for America was only matched by his lust for wealth and fame.

He was also extremely nasty and malicious. He slandered Joe Louis as an “Uncle Tom” for serving in World War II. Joe Frazier intensely lobbied to have Ali’s boxing license eventually reinstated. This did not stop Ali from openly mocking Frazier for his poor communication skills and his looks—in particular, his facial features. In a racist slur, Ali derided Frazier for looking like a “gorilla.” Ali humiliated his numerous wives with multiple sexual affairs. His view of women was retrograde and primitive: They were only fit for housework, laying on their backs and having babies.

The media is also peddling the fiction that Ali was a civil rights pioneer. He was nothing of the kind. He was an admirer and follower of Malcolm X—a militant Muslim who taught that whites were demonic and blacks should live in self-segregated communities. Ali, however, did achieve one major accomplishment: The art of playing the race card. He perfected the cause of black victimology, relentlessly portraying himself as a victim of a racist white America (no matter how famous or rich he became). He did nothing to advance race relations or bring about greater harmony or improved comity. In fact, he did the opposite. He constantly emphasized the differences between the races, inflaming racial divisions and animosity. It’s no wonder he did everything possible to launch the careers of race-baiters, such as Al Sharpton.

Other black sports figures displayed real courage, humility and honor in the face of hatred. They genuinely broke racial barriers and helped to advance the cause of civil rights and desegregation—Jesse Owens, Joe Louis and Jackie Robinson (to name a few). They weren’t buffoons on the make, but serious men who took pride in their sport and their country.

Even Ali’s name-change was a hoax—aided and abetted by a liberal media that sought to impose maximum guilt upon Middle America. Ali claimed that Cassius Clay was “my slave name.” Hence, it’s the reason why he changed it to Muhammad Ali. That is false; it was a deliberate lie. He was named after Cassius Marcellus Clay, a prominent Kentucky politician, newspaper publisher and most importantly, abolitionist. For his abolitionist views and activities, the first Cassius Clay was shot and nearly killed by pro-slavery defenders. He was one of the earliest voices to urge President Abraham Lincoln to abolish slavery. This is why in Kentucky—Ali’s home state—Cassius Clay was a name that was proudly given by both blacks and whites due to its distinguished anti-slavery pedigree. Rather than having a “slave name,” Ali had the exact opposite.

Truth, however, had nothing to do with Ali then—or now. The establishment media is using him today the same way they used him during the 1960s and 1970s: as a battering ram to advance their progressive-liberal agenda. Their goal is not only to legitimize their view that the Vietnam War was a colossal mistake, but that the country’s growing skepticism regarding Islam is unfounded and immoral.

Ali was the very thing the mainstream media loves: a Muslim socialist. This is why they will continue to lie about who he was and what he stood for. Since the 9/11 attacks, the left’s mantra has been that Islam is interwoven into the fabric of America. What better example than Muhammad Ali? That his past must be whitewashed and his racist, vile worldview sanitized and covered-up, is the price of creating a multicultural utopia. For liberals, the ends justify the means—even if it requires a regime built on lies and manipulation. George Orwell warned us: the bigger the lie, the better.

-Jeffrey T. Kuhner is a columnist at WorldTribune.com and the host of “The Kuhner Report” weekdays 12-3 pm EST on WRKO AM-680 in Boston.

2 thoughts on “Why the media lies about Ali”