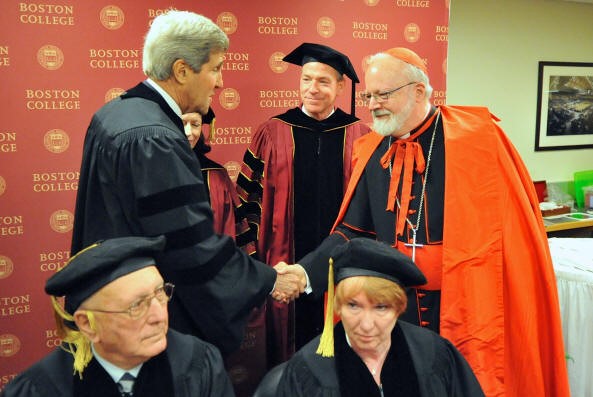 A major pro-life event is coming the Commonwealth of Massachusetts and the City of Boston on Saturday, October 15th. That event is the National Men’s March To Abolish Abortion And Rally For Personhood.

At 11:30 am on the 15th, the participants will gather at the Planned Parenthood abortuary at 1055 Commonwealth Avenue in Allston. At 12:30 pm, they will commence their march to the Massachusetts State House. At 2 pm, the Rally For Personhood will begin in front of the State House on Beacon Street in Boston.

The purpose of the march is to encourage men, especially fathers, to take responsibility and resolve to do more to end the scourge of abortion in America.

This admirable endeavor deserves the support of all Faithful Catholics, and all those who believe that innocent human life deserves the protection of law from conception to natural death.

The archdiocese slams the door
Shockingly, though perhaps, unsurprisingly, the Archdiocese of Boston is refusing to support the march, and erecting roadblocks to its success.

March organizers wrote to Cardinal Sean O’Malley, seeking his support. They received no reply. Instead, on August 16th, a statement was issued by the Archdiocese of Boston, under the name of a middle level bureaucrat, Father William P. Joy, effectively ordering parishes and Catholic schools not to support the march.

The statement said that Cardinal O’Malley would join the Annual March for Life in Washington in January of 2023, and went on to say that the archdiocese will focus all of its attention and support on that event.

It then added, ominously, “It is important this commitment be understood. Parishes and schools may be approached to publicize or support other marches, but these will not be endorsed by the Archdiocese nor should they be supported by its institutions.”

Now, the Catholic Action League has just learned that The Pilot, the archdiocesan newspaper, is refusing advertisements for the Men’s March.

Obviously, the suggestion that Catholic institutions are somehow incapable of supporting two different pro-life events—three months apart—is an example of the casual, callous and adolescent level of mendacity which Catholics have come to expect from their ecclesiastical leaders.

Why, then, are Cardinal O’Malley and the archdiocese trying to undermine the Men’s March For Life?

I suspect that there are, at least, three reasons:

(1) A history of withholding support The pro-life position of the Archdiocese of Boston has carefully delineated limits, whose boundaries, unlike America’s southern border, are strictly enforced.

The RCAB will promote its own pro-life initiatives, and will participate in events sponsored by establishment right to life organizations, like the March For Life and Massachusetts Citizens For Life, who have a history of deference to the Catholic hierarchy.

Beyond that, it will not go. The archdiocese has a long record of cold shouldering effective, grass-roots pro-life groups like Operation Rescue: Boston, 40 Days For Life, and the Helpers of God’s Precious Infants.

Some years ago, a representative of Priests For Life was banned from giving a homily at a South Shore parish. Many pro-lifers remember the infamous 2017 incident when the archdiocese and the state’s Catholic Conference tried to sabotage—through a ban on signature gathering on church property—a pro-life constitutional amendment being offered by the MA Alliance To Stop Taxpayer Funded Abortions.

(2) Pro-abortion politicians are their friends The Men’s March has committed a cardinal sin in the eyes of the Archdiocese of Boston. It has called for the enforcement of Canon 915 of the Code of Canon Law, which prohibits giving Holy Communion to those in a state of “manifest grave sin.” In other words, the March organizers oppose the sacrilegious distribution of the Holy Eucharist to pro-abortion politicians.

This issue is the third rail of archdiocesan hypocrisy. Cardinal O’Malley and his aides wish to present themselves as pro-life, while maintaining for decades, a close, amicable, ingratiating and mutually supportive relationship with the politicians who enable, promote, expand and perpetuate the slaughter of the unborn.

Under Cardinal O’Malley, Catholic Charities of Boston gave not one, but two awards, to the pro-abortion, and radically pro-homosexual Mayor of Boston, Thomas Menino.

In 2014, the Society of Saint James the Apostle, whose President is the Cardinal, gave their Man of the Year Award to the fanatically pro-abortion Mayor Marty Walsh, who said he wanted to make Boston a sanctuary city for abortions.

As the Catholic Action League has pointed out, Cardinal O’Malley is, probably, the most egregious offender in the American hierarchy when it comes to giving awards, honors and platforms to pro-abortion political figures.

He routinely made public appearances with Mayor Walsh and Governor Charlie Baker, and brought them to Catholic venues and fundraisers. He held a press conference with Congressman Joe Kennedy III; attended an awards ceremony for Barack Obama; was pictured smiling with Barney Frank at a housing dedication; and co-wrote an op-ed piece on immigration, opposing President Trump, with Bay State Attorney General Maura Healey, a partnered lesbian.

Just six months ago, the same Father Joy who signed the letter targeting the Men’s March, signed another letter stating that the Cardinal would not intervene in the decision of Catholic Memorial School to honor Marty Walsh.

For the Cardinal and the archdiocese, cozy relations with pro-abortion pols means help with fundraising, favorable media coverage, tax dollars for Catholic Charities, and, very possibly, easy municipal approval for the real estate transactions which keep the archdiocese afloat.

(3) It is a liberal archdiocese The Cardinal’s closest advisor is Father Bryan Hehir, the reputed author of Cardinal Joseph Bernardin’s “Seamless Garment” theory.

The intent of this ideological contrivance was to destroy the pro-life movement by trivializing abortion, reducing it to the same moral importance as health care, housing, social welfare, capital punishment and the care of immigrants.

In 2020, Cardinal O’Malley actually said that the unlawful killing of African Americans by police officers was “all too familiar,” and went on to say that “racist premises and attitudes…are woven through basic structures…in the United States.”

He has advocated for minority reparations. His support for liberalized immigration “reform” is longstanding.

His tepid, low key statement on the Dobbs decision—the greatest pro-life victory in half a century—seemed intended to reassure so-called progressives that, despite his opposition to abortion, he was still supported them on other issues.

After more than nineteen years of the O’Malley episcopate, I believe it can be reasonably assumed that Cardinal O’Malley and his top aides are bourgeois liberals, who are comfortable with secular, pro-abortion elites, but who are uncomprehending towards ordinary, faithful Catholics who are conservatives, Republicans, or—Heaven forfend!—voters for Donald Trump.

Culturally, socially and politically, the sort of Catholic likely to participate in the Men’s March is an alien species to the leaders of the Archdiocese of Boston. They are members of a different party, and, more importantly, a different class.

What is to be done?

First of all, call the Pastoral Center at 617-254-0100 and express your outrage over the attempted sabotage of the Men’s March.

Secondly, let your local pastor know how upset you are, and that you will be reevaluating your support for the next archdiocesan appeal.

Thirdly, attend and make the Men’s March a success.

Finally, understand and learn to work around the Archdiocese of Boston. It is not an ally, but an obstacle to the pro-life movement in Massachusetts.

Thousands to March to Celebrate the Fall of Roe in Dallas

MIAA confirms that its Diversity, Equity, and Inclusion Pledge and Implicit Bias Course are NOT compulsory for student-athletes or coaches    by Massachusetts Family Institute Wakefield, MA – The Massachusetts Read More…

Activists to Hold Protest in Front of the Home of Washington, D.C.’s Mayor Calling for an End to Abortion Violence in Our Nation’s Capital

Activists to Hold Protest in Front of the Home of Washington, D.C.’s Mayor Calling for an End to Abortion Violence in Our Nation’s Capital NEWS PROVIDED BY Christian Defense Coalition Read More…

3 Replies to “WHY IS CARDINAL O’MALLEY OPPOSING THE MEN’S MARCH FOR LIFE?”