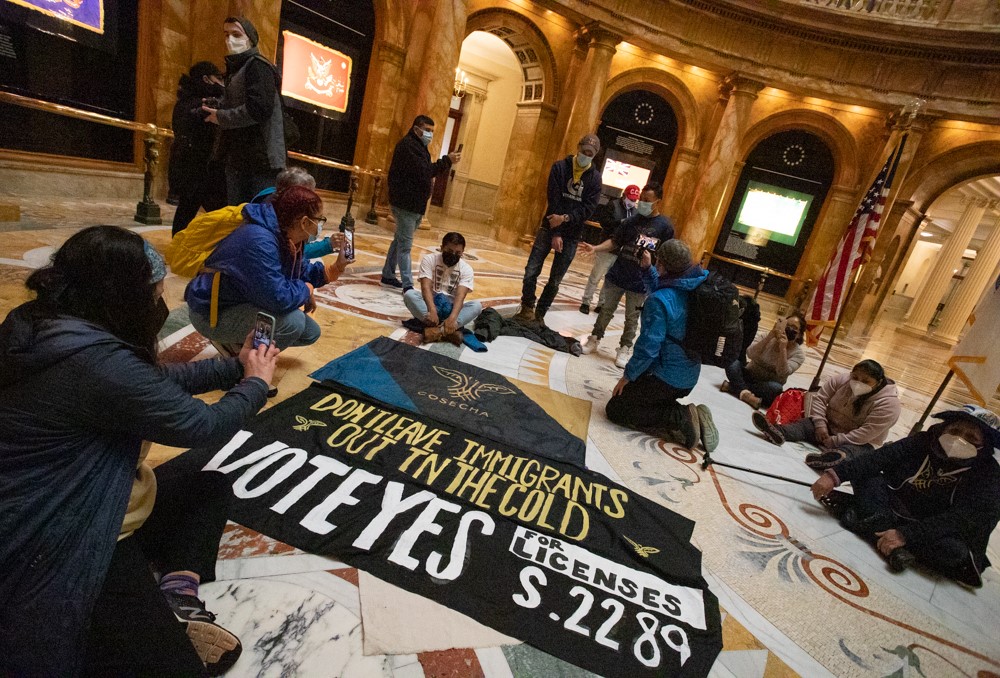 Ask a politician a question that starts with “when” and nine times out of 10 the answer will be, “Soon.”  Well, soon arrived in Somerville this week… |

Recap and analysis of the week in state government

MARCH 25, 2022…..Ask a politician a question that starts with “when” and nine times out of 10 the answer will be, “Soon.”  Well, soon arrived in Somerville this week in the form of a big green trolley rumbling into Union Square as it broke through a ceremonial ribbon.

Undocumented immigrants, family members, and allies organized by Movimiento Cosecha occupy Memorial Hall on Thursday, calling for the Senate to pass a House-approved bill that would establish a process for immigrants without legal status in the U.S. to obtain Massachusetts driver’s licenses. The gathering marked one of the first organized demonstrations inside the State House since it reopened to the public last month. [Sam Doran/SHNS]

“I do not remember a day in my life when the people of Somerville didn’t think the Green Line was coming soon,” said former Congressman and former Somerville Mayor Mike Capuano, who is now 70.

But come it has. The Green Line Extension, a project synonymous with delays and cost overruns, finally pulled into the station this week, welcoming its first paying passengers. And if you weren’t at the opening ceremony, we don’t know who you are.

Now it’s Medford’s turn to wait, though the opening of the second spoke of the Green Line extension to Tufts University is months, not years, away, MBTA General Manager Steve Poftak said. The brass band had barely even started playing before some political leaders started talking about a deeper push into Medford to Route 16.

Events like these are how you picture a lame-duck governor spending his final months in office, gripping a large pair of scissors and mugging for the cameras. Senate President Karen Spilka presented Gov. Charlie Baker with his very own duck at the return to in-person roasting at Sunday’s St. Patrick’s Day breakfast in Southie, and despite Baker’s loathing of the label he insisted on taking the duck home, the president said.

But Baker continued to show this week he’s not quite ready to hit the showers.

In his first in-person speech to the Greater Boston Chamber of Commerce in two years, Baker resisted the urge to reflect on what had been accomplished with the business community these past seven years and, instead, asked for help getting a few more things done.

The governor asked for support in getting his health care bill across the finish line. That bill would require insurers and providers to boost spending on behavioral and mental health by $1.4 billion over the next three years.

And he said he would soon be refiling for money to help cities and towns redesign their downtowns in a way that will allow them to thrive without the daily influx of workers who are shifting, perhaps for good, to hybrid office schedules.

Baker previously requested $250 million in American Rescue Plan Act funds for this downtown reimagining exercise, but got zilch from the Legislature in its $4 billion ARPA/surplus spending bill. That redevelopment bill, when he files it, is also expected to include a request to put the Hynes Convention Center back on the auction block.

The governor will need a lot of buy-in from Democratic lawmakers to get even half of his wishlist done before the end of July, but he didn’t need approval to kickstart what he described as some “unusual approaches” to getting people back to work.

A new $50 million program rolled out by the administration will incentivize hiring and help defray the costs of training new workers by offering grants of up to $4,000 per employee, capped at a total of $400,000 per organization, for businesses to speed their post-pandemic rehiring processes.

Both Spilka and House Speaker Ron Mariano were tripping over themselves to respond to Baker’s pressure campaign to improve access to behavioral health, calling it a priority of theirs long before Baker filed his health care bill this month.

The Senate, in fact, has already passed a mental health reform bill, and Mariano committed this week to advancing that proposal and adding to it.

Spilka and Mariano sat down for a rare side-by-side interview with the News Service on Wednesday during which they talked about their friendly, if syncopated, relationship. Now more than a year on the job, Mariano said he was even willing to “admit this now” that his early days on the job meant a few “desperate” phone calls to his Senate counterpart to get her advice as he settled into the role.

Their discussion of priorities for the next few months shed light on the Senate’s plans to take up energy legislation around Earth Day in April, and Mariano said his inclination is to use the fiscal 2023 budget to begin implementing some of the recommendations of a special commission on early education – presumably the ones that don’t carry a price tag in excess of a $1 billion.

One of the main points of friction between Spilka and Mariano — sports betting — did not come up in their hour-long discussion, but a News Service poll of all 40 senators found more than sufficient support for the idea, in general, if Spilka would allow it to reach the floor.

The House and Senate may not see eye-to-eye on sports betting yet, but they were singing the same tune of opposition to suspending the state’s 24-cent gas tax.

Gas prices have begun to come down, but at $4.25 a gallon on average Senate Republicans were not willing to let the chance go by to force a vote on a tax suspension through Labor Day. Their efforts seemed to be buoyed by a unanimous vote in neighboring Connecticut to suspend that state’s 25-cent fuel tax through June 30, and Baker warmed to the idea as he said the actions of other states were about to put Massachusetts drivers at a costly disadvantage.

The confluence of outside forces (plus a new proposal to backfill lost revenue with surplus funds) were not enough to swing reluctant Democrats, who continued to call the idea a “gimmick” that was more likely to line the pockets of Mobil and Exxon executives than deliver modest relief to drivers.

On route to passage of a $1.65 billion spending bill that also called for the divestment of state pension funds from Russian companies sanctioned or incorporated in Russia, Senate Republicans succeeded at something, however. They forced a recorded roll call vote on the gas tax.

Eight of the Senate’s 37 Democrats crossed party lines to support the gas tax suspension, and all four senators seeking statewide office this year voted no. Wonder if that will appear in any GOP ads this fall?

Sen. Sonia Chang-Diaz was among those who voted no on the same day she challenged Attorney General Maura Healey to three televised gubernatorial debates before the Democratic Party’s June 4 convention in Worcester.

Chang-Diaz, the underdog in the race, would have a lot to gain from the exposure that comes with live TV debates. Healey? Not so much. So perhaps it was no surprise that the attorney general’s campaign responded by saying that while Healey will debate before the Sept. 6 primary, they were not ready to say when or how many times.

The winner of that primary will take on either former Rep. Geoff Diehl or Wrentham businessman Chris Doughty in November. And like Doughty, Diehl turned to a former state legislator to be his unofficial running mate this week.

While major party candidates for governor and lieutenant governor don’t run as a ticket in the primary, Diehl said he was teaming up to campaign with former Rep. Leah (Cole) Allen.

Allen, who lives in Danvers, spent the briefest of stints in the Legislature, resigning without ever serving a full term to focus on her nursing career – a career she said is now in jeopardy because she refused to be vaccinated.

Now that debate over vaccines and mandates would be worth watching.

STORY OF THE WEEK: The trip from Somerville to Boston just got easier, if commuting is something you even do anymore.

SONG OF THE WEEK: All aboard the first train to Union Square.