STATE HOUSE, BOSTON, MARCH 21, 2022…..Republican gubernatorial candidate Geoff Diehl will run as a team with former state representative Leah Allen, a North Shore Republican who spent a brief stint on Beacon Hill before leaving the House to focus on her nursing career. 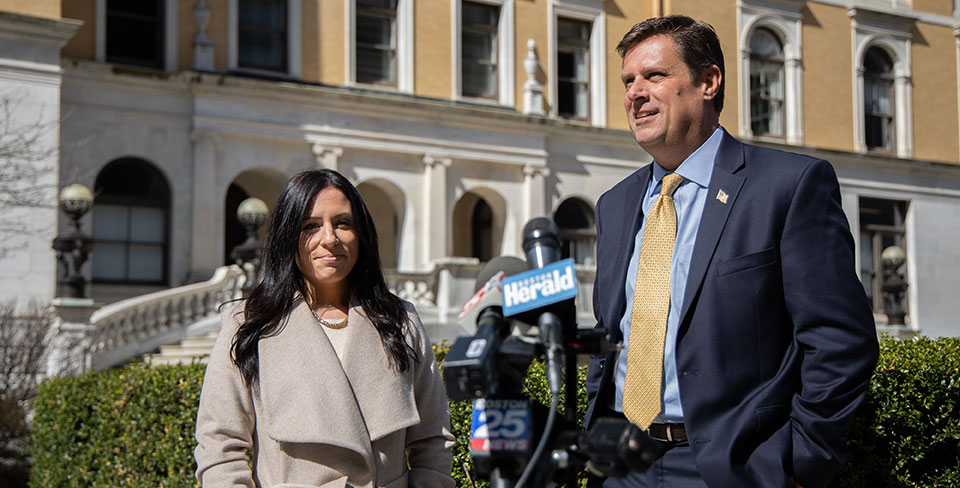 Diehl, a Whitman Republican who served in the House with Allen, announced her Monday morning as his running mate for lieutenant governor, rounding out what he hopes will be the GOP ticket for governor in November. Allen said she was happy to join Diehl’s campaign because of his stances of “personal freedoms.”

Allen said she has been at risk of losing her nursing job for not being in compliance with a vaccine mandate. She said she was pregnant during the pandemic and was not comfortable receiving a shot out of concerns for what she said were potential long-term effects.

While working as a registered nurse and treating COVID-19 patients, Allen said she witnessed decisions being made from “the top down without a lot of input and, frankly, without consent a lot of times, from the people it was affecting” and the situation made her want to get involved in politics again.

“That’s one of the things that’s very important to me. It’s one of the things that drew me to Geoff’s campaign, was his stance of personal freedoms, autonomy, standing against the vaccine mandates,” she said at a press conference outside the State House. “I was proud to join him on that, as well as just the fact that in Massachusetts prices are rising fast, inflation is going up quickly. We have to think of creative ways to help people in Massachusetts cope with that and make life more affordable here in the state.”

Candidates for governor and lieutenant governor don’t technically run as a ticket in the primaries, but both Diehl and his Republican rival for the nomination Chris Doughty have teamed up with former House lawmakers to run together this year. Doughty has announced Kate Campanale, a Spencer Republican, as his running mate.

Diehl said the new duo — Allen and himself — plan to focus on getting past the pandemic as “effectively as possible” and provide the leadership that is expected from politicians on Beacon Hill.

“Both of us have served in the Legislature, we have that experience. We’re both parents. Leah has an even more, I think, relevant experience serving as a nurse, most recently during the pandemic,” Diehl said.

Allen’s selection by Diehl as a running mate doesn’t balance the ticket in the same way Campanale did for Doughty because both Diehl and Allen have Beacon Hill backgrounds in politics, though Allen adds a fellow conservative voice to Diehl’s campaign.

Allen, who has married and changed her last name from Cole since her days in the Legislature, was first elected at the age of 24 in a 2013 special election, but stepped down in 2015 after a short run in the House, representing Peabody, to focus on her nursing career.

In a statement released by the Diehl campaign, Allen talked about families struggling with high prices of gas and groceries and the difficulty children have faced returning to school after months of at-home learning and being forced to wear masks in the classroom during the pandemic.

At Monday morning’s event, she said masking in schools was an appropriate response at the outset of the pandemic when little information was available about the virus. But she said as the months wore on, students should have been allowed to remove their masks.

“I think there’s a psychological component, as well as a social component, language development, all kinds of things that just weren’t being considered during kind of the hysteria of the pandemic,” she said. “And I think that masks should have been taken off kids a lot earlier.”

Public health officials at the federal and state level have pointed to masking as one of the most effective ways at preventing the spread of the virus. In schools around Massachusetts, masks have started to come off, though Boston Public Schools students will still need to keep them handy.

In making their decision, Boston Mayor Michelle Wu pointed to vaccination gaps between young people and varying neighborhoods in the city. The decision to keep masks on in schools came at the same time the city was dropping its mask mandate for most indoor places.

For Allen, her concerns with masking go side by side with stances on curriculum in schools.

“I think that education is very centralized right now, a lot of it comes from Washington, D.C., it comes from places where it kind of keeps parents out of the decision-making,” she said. “And I think that parents should have the final say in what the curriculum is that their children are learning.”

At work, Allen said she is “facing the prospect of losing her job” because of non-compliance with a vaccine mandate. She said she hasn’t received her letter of termination yet, but based on co-workers who had similar experiences, she expects that “I’ll lose my job as well.”

Allen declined to say where she worked “until perhaps I’m terminated,” but said she pursued a religious exemption from a vaccine mandate.

“I used the religious exemption to exercise my right to opt out of the vaccine for religious reasons,” she said.

Asked whether she agreed with concerns from her running mate that the 2020 presidential elections may have been rigged, Allen said she thinks “there was enough evidence that there could have been an issue, so it’s worth looking into.”

“I think that there was enough states that felt that it was, that they were investigating it,” she said. “And I would like to see the outcomes of those investigations.”

She declined to say which states she was referring to or her position on the 2020 election.

“I think it’s important, and perhaps we could discuss it sometime,” she said. “But right now, I’d like to focus on the reasons why I’m running and bringing relief in the form of maybe tax cuts or for removing the mandates so that people can get back to work.”

MassGOP Chair to Be on Radio SAT. 11 am. to address HEALEY SEX/LEGAL ISSUE