Here’s Why Bob May Has My Vote

The 2020 election drove some hard facts home for me. The first is that just because Massachusetts is a deep blue state doesn’t mean that I get a pass to hang around and whine about it. Note to self: Get busy, girl. Bob’s 2020 loss (or, should I say, near win?) for State Rep unnerved the Dems enough to gerrymander him out of the district. The Dems’ collective dusting-off of hands was short-lived. Bob’s not one of the squishy Republicans they’re used to pushing around. Not by a long shot.

Bob May is 100% America First. He stands for our most fundamental rights of free speech, to gather peacefully, and to bear arms. Bob is a regular guy who believes the working class should have work, be able to put food on the table, and fill their tank.

Bob has this crazy idea that our economy will once again flourish if we stop offshoring (read: China) our manufacturing. I’m sure third-world factories and wages are dreadful by our standards, but at least the workers aren’t under the ­­duress of, “Work faster, or we’ll take your liver.” Bob will advocate tirelessly to de-couple from China and repatriate our manufacturing. Another no-brainer he supports is the return to energy independence; we are now on bended knee at the House of Saud, begging for oil. Additionally, Bob believes our enemies should fear us; the “wokification” of our military only emboldens our enemies. Bob May will support all efforts to strengthen our military and make America safe again. 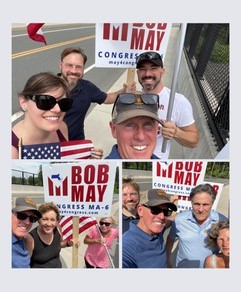 Disgusted with Biden’s puppeteers’ managed dismantling of the greatest democracy on Earth, Massachusetts’s closet conservatives have left the door ajar. To step out, all they need is the realization that they are not alone. That, or the rocketing inflation, the open Southern border, and the Department of Indoctrination’s – oops, Education’s – radical agenda bests the need to care what the Blue Checks think. The poor and the working and middle classes cannot afford to vote Democrat anymore. The challenge is to awaken most Massachusettsians to what they already know – that the people’s party is now the (America First) Republican Party.

Bob May is passionate and committed to riding the Red Wave to Washington. With our support – donations, volunteering, displaying a yard sign, or talking up the issues to friends and family – Bob will retire the woke Seth Mouton. Years ago, I stopped being shy about my beliefs. The eye rolls don’t bother me anymore. If people don’t listen, I believe, on some level, they hear. It’s sinking in. It starts here, so speak up. Let’s send Bob May to Washington!

Colarusso/Cambell “Let’s Get You Back to Business”

Massachusetts small business owners should be allowed to reopen safety. Generations of blood, sweat and tears built this. Americans Built This ! “Its time for change in Washington DC ! Read More…

One Reply to “Here’s Why Bob May Has My Vote (Mass. Congress)”