The Italian American Alliance is having  a Wreath Laying ceremony at 2PM on Columbus Day at the spot where the statue in the North End was vandalized by supporters of Indigenous Peoples Day.  JOIN THE MANY SUPPORTERS AT Christopher Columbus Park.  Don’t let them take this park of America away from us.  Don’t let them erase our heritage. Who will be next? 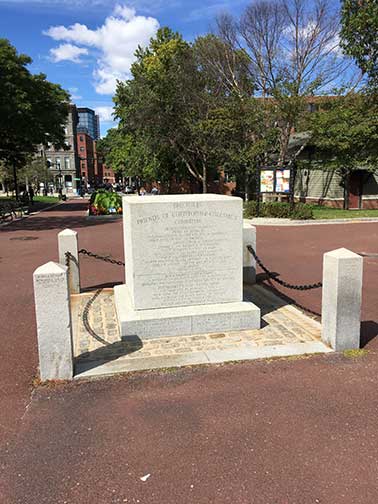 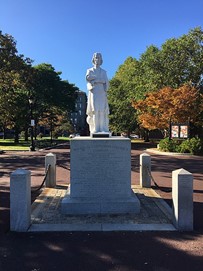 Statue was vandalized and locked away by Mayor Marty Walsh, later to be deposited in an obscure location, no longer on prominent display.
The statue and park area was all paid for by private donations from a multitude of people, politicians, and organizations.

COLUMBUS PARK OFF ATLANTIC AVE in the Boston North End

An Ode to Kim Janey, on Columbus Day , Written by Dr. Domenic Amara

She came as a thief in the night

without a sound she plotted

to steal our honor and our nite

to start a battle so unwanted.

Again, we meet the ugly face

of those who would  incur us

To defend our case and  space

our heroes and history thus

We came and were perceived

no less welcome than any others

But with our heritage we achieved

Despite the rejections and the mutters

What more  do you expect of us,

Have we not earned our place?

We’ve given much,  and plus

Our minds, our blood our grace.

We’ve now been pressed to war

by those who need a hate

To bring chaos to America’s  door

and division to its gate.

Columbus is a symbol

of our struggle in this land

A metaphor for one implacable,

which we will not see banned

But this fight will not be won

by leaving it to others

Nor will it be done

with fists or bats or hammers

Our weapons are our honor,

Our heritage is our armor

Against the Lions at the Gate

Their weapons will be fear

Nor will they stop at threats or smears

To make you take a walk

Now ,before I am unable

I say of those who bring

Appeasement to the table…

I works only in a fable

Rise up, I say without delay

Before you can rise no more

She, they, have taken your dignity away

Now,  kick them out the door.

FOR IMMEDIATE RELEASE Boston First Responders United is pleased to announce that the members of the Boston Police Patrolman’s Association’s voices have been finally heard! In a resounding, and almost Read More…