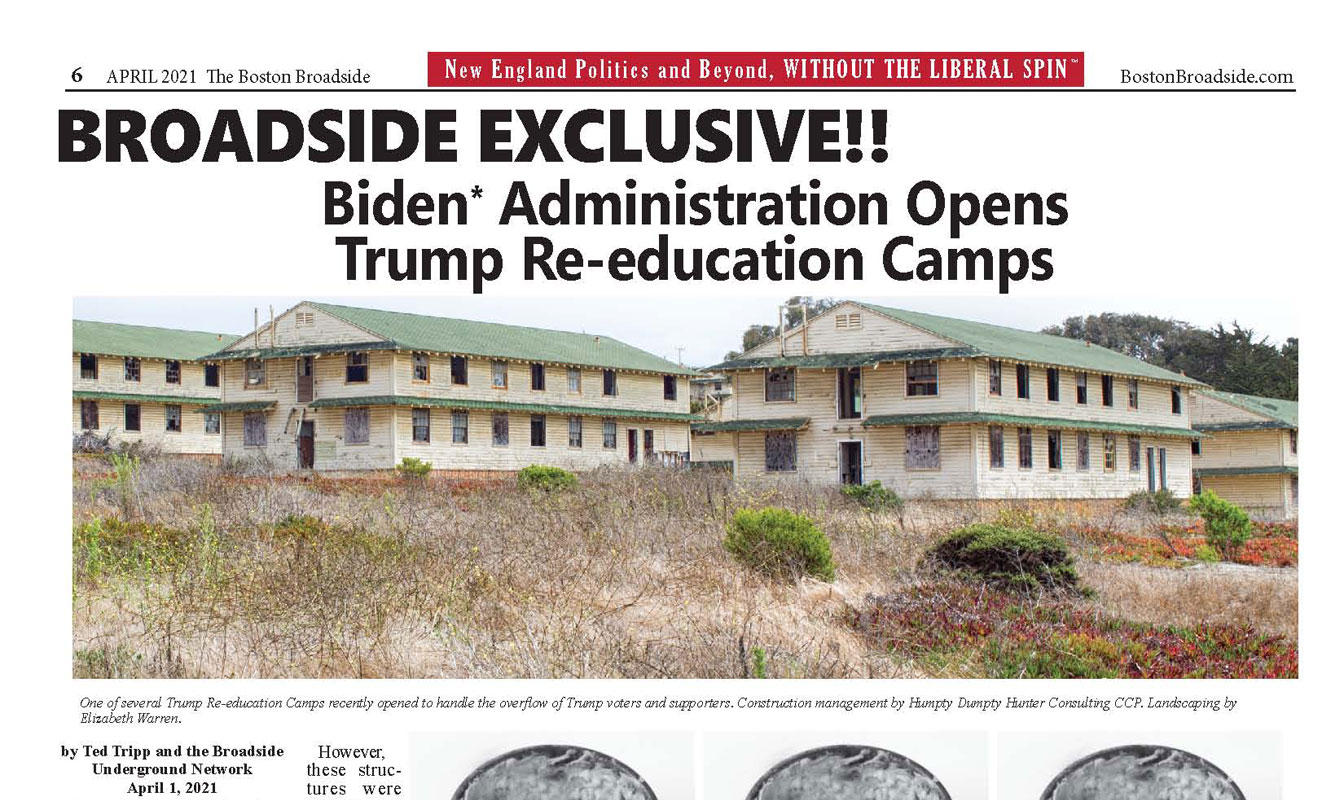 by Ted Tripp and the Broadside Underground Network

Remember your neighbor down the street who had the big Trump sign in his yard before the election last fall? And now you haven’t seen him for several weeks and the house is dark?

There is a good chance your neighbor was hauled out of bed in the middle of the night by the Biden BrownShirts and put on an electric bus to one of the several just-completed Trump Re-education Camps.

The Boston Broadside has learned through a confidential source (whom we will call Deep Throat for now), that Acting President Biden’s early Executive Orders shutting down the Keystone XL oil pipeline and banning fracking on federal lands had an alternative but more important objective. And that was to free up skilled workers who could be used to construct the massive amount of housing necessary for the re-education program.

Our source has further informed us that these workers, after being laid off, were offered high-paying jobs and relocation money by the Harris Housing for Everybody project to build large, barrack-size buildings which the workers were told “were for the poor.”

However, these structures were not for the poor but to re-educate the first wave of Trump supporters – the worst of the worst – those who claim the election was stolen.

The Broadside has further learned that the first several Trump Re-education Camps are located on the outskirts of Detroit, Philadelphia and Atlanta. Although this paper has not been able to confirm it, we believe these cities were selected as a plum to the mayors of those locations which were so important to the Biden/Harris steal victory.

Supposedly, former Attorney General Eric Holder from the Obama administration is in charge of this huge re-education effort. Holder was best known for Operation Fast and Furious, a disastrous program which put thousands of guns in the hands of smugglers and Mexican drug cartel members which directly resulted in the death of U.S. Border Agent Brian Terry and reportedly many others. Holder was later held in contempt of Congress (for refusing to turn over documents) by a vote of 255 to 67, the first presidential cabinet member to ever suffer that humiliation.

Applications for re-education camp instructors have been pouring in from colleges and universities all over the U.S. There is no shortage of professors and assistant professors who want to retrain Trump supporters about their evil ways and show them the more advanced, progressive system of governing a society. Our source, Throat, says that he/she believes that Boston University Law School’s Dean Angela Onwuachi-Willig, just appointed the country’s first Critical Race Theory Professor, has taken a leading role in the re-education curriculum. Another noted individual supposedly involved is Karen Hunter, a Pulitzer Prize-winning journalist who is also a distinguished lecturer at Hunter College’s journalism school. She is perhaps noted best for saying the United States is a “400-year criminal enterprise.” Many other “extinguished” educators from the top schools in the country are either currently instructors at the Trump Re-education Camps or are on a waiting list to be hired.

Many guest lecturers have already signed on with many more in the wings. Pencil-neck Congressman Adam Schiff is making the rounds with “How to Spot a Russian Collusion and Convince Everybody You Have Proof of It.” Congressman Eric Swalwell is lecturing on “Chinese Spies – How to Sleep with Them and Keep Your Job on the House Intelligence Committee.” Governor Andrew Cuomo has a two-part course on “How to Fight the Coronavirus, Destroy a Vibrant, Major City and Significantly Reduce the Nursing Home Population – All at the Same Time.” Not to be outdone, Senator Elizabeth Warren in the next round of lectures will speak for three hours on “My Native American Ancestry” and “How to Win a Presidential Election.” In addition, Speaker of the House Nancy Pelosi will address Trump supporters on “How to Walk Around the Human Waste on the Streets of San Francisco While Enjoying the City.” Finally, even Acting President Joe Biden has promised to drop in from time to time and speak on “Executive Orders … What Executive Orders?” That is if he can remember the dates and times for speaking.

Required reading at the Trump Re-education Camps includes “Mein Kampf,” Pol Pot’s “Little Red Book,” Chairman Mao’s “Little Red Book,” Christopher Wray’s “White Nationalists are the Greatest Danger to the United States,” Hillary Clinton’s “All Trump Supporters are Deplorables,” and James Comey’s “How to Play Ignorant During Criminal Investigations and Become a Hero for It.” Many other titles are awaiting approval.

Funding to build the Trump Re-education Camps came from the money that was left over after wall construction along the Southern border was abruptly halted by Acting President Biden. Operating funds for the three Camps now in place and subsequent expansion to other cities has just been approved in the $1.9 trillion COVID-19 Relief Bill. The amount to start is believed to be $225 billion. While no details have been released on how the money is to be specifically allocated, our source Deep Throat has spoken with those Biden people who crafted the bill and can report that 10% is to be set aside for “The Big Guy.”

Stay tuned for further updates on the Trump Re-education Camps. Meanwhile, if you had a Trump sign in your yard last fall or went to a Trump rally, keep your doors locked at night and watch out for the Biden BrownShirts.