FROM OUR PRINTED JUNE 2022 EDITION:

Linda Wojas has been in prison for almost 32 years. That statement breaks her daughter’s heart. Linda isn’t in an actual prison, but a mental prison, one with bars forged by the emotions and pain her daughter, Pamela Smart, has endured in a maximum-security facility that houses some of the most dangerous New York convicts (as well as some unfortunate women). If you read the book, you might get trapped in prison too. Read the book.

If you remember the infamous Pamela Smart murder trial, it was the first-ever live broadcast trial in the nation. If you want to know what the New Hampshire jury and public wasn’t told, read the book.

In 451 pages, Pamela’s mother, Linda, shares summaries, photos, post-trial discoveries, and excerpts from her daughter’s prison journals. Linda breaks decades of silence to share a glimpse of what Pamela and her family have gone through since the original fake media of the 1990s declared Pamela guilty, long before she ever went on trial. You’ll most likely struggle with the emotions of reading Pamela’s diary entries. Read the book.

Do you know anything about the four guys who participated in the execution of Pamela’s husband, Gregg Smart? Portrayed to the jurors as good boys, post-trial they were revealed to be thieves, drug users, and at least one, by age 18, had already served prison time. Do you know that the guys conversed, pre-trial in jail (two of them in the same cell – not separated – plenty of time to get their stories straight). Or that one wrote an f-bomb laden letter (far cry from his public media performance) stating, in part: “We have no choice, it’s her or us,” as the four strategized on how to beat their anticipated life sentences?

You might know the predators stole a gun, bought ammo, and one of them (most likely not the one that looked like a Teen Beat heart throb) put the gun to Gregg’s head and executed him in his own home.

Do you know that the predators were all let out of prison with sentence reductions?

Vance Lattime was paroled 17 years ago. Billy Flynn and Patrick Randall were paroled seven years ago. Raymond Fowler was granted parole 20 years ago. While they have been set free, the media-created celebrity Pamela Smart received a special sentence: to stay in prison until she dies.

Perhaps you know that Pamela’s husband, Gregg, had a one-night-stand which temporarily shattered their relationship. You might know that following this relationship crack, Pamela had an affair with Billy Flynn (the Teen Beat heart throb). You probably know that he was a student and that she worked for a New Hampshire school district (as a media coordinator, not a teacher), at age 21, newly minted out of college.

And perhaps you know there were tapes presented at the trial.

And did you know that a girl who testified against Pamela landed a $100,000 movie rights contract just weeks before the trial? Hmm. Read the book.

Do you know how many times Pame (how she spells her nickname, pronounced Pam) had the crap beaten out of her in prison?

Do you know that following one beating, Pame had surgery to have a plastic plate installed in her face to keep her eye socket attached?

Do you know about the beating that caused her to have surgery on her leg (and years of pain)?

Do you know about the worst thing a woman could be subjected to by a male guard (he later committed suicide)?

Do you know folks traveled across multiple state lines, booked hotel rooms, and attended the overflow circus-media-fueled crowd at the courthouse every day?

The trial judge is long-dead. Passed over repeatedly for promotion to a higher court, his wish to have Clint Eastwood portray him in one of the post-trial movies (two were made post-trial, one pre-trial) was never fulfilled. Similarly, the jury forewoman’s desire to have Meryl Streep play her part in a movie also went unfulfilled. Yet movies were produced, loosely based on the trial, but admitted by the screen writers to be not based on reality, yet which forever sealed Pame’s fate and celebrity status.

If you can bear to step inside the razor wire and spend time in prison with Pame, read the book. Take it slow, spend a week or two. Don’t rush this read.

It’s not a fluffy adventure. It’s not peaches and cream. It’s not camp cupcake. It’s a maximum-security facility. The inmates range from the violent to the downtrodden, to the mentally challenged, to the gals who were dealt a raw hand. The book’s chapters include notes on many who have struggled to rehabilitate themselves, make themselves better from the inner core out. Throughout it all, Pame finds friends, helps many, and saves some lives.

If you devote the time to read this book, you’ll glimpse days of frustration, pain, breakdowns, and you’ll also share Pame’s excitement when she is able to help someone, work with ministers and nuns, help fellow prisoners take the GED, improve themselves, and get along with others. Spoiler alert: You should expect to tear-up repeatedly. You can also expect to shake your head and want to dope-slap all the players involved.

“I’ve bottled up my feelings for 30 years now,” Pame’s mother shared, “and finally decided to release personal and revealing letters between Pamela and myself, to share with the public so people can see the truth behind all the lies.

“I want her home before I die and will continue to file petitions to get the Executive Council of New Hampshire to free Pamela. This is my book. This is our story. This is what I live for.”

Linda’s book is full of raw emotion. Reader caution advised. You will find yourself (mentally) in the jail cell with Pamela Smart. You will question many things you didn’t know about the show trial. You will see the highs and the lows, the power and the fear, and the results of selective prosecution. Read the book. ISBN 9798640984590, available at Amazon. (Or, contact the Broadside. We have limited copies.)♦ 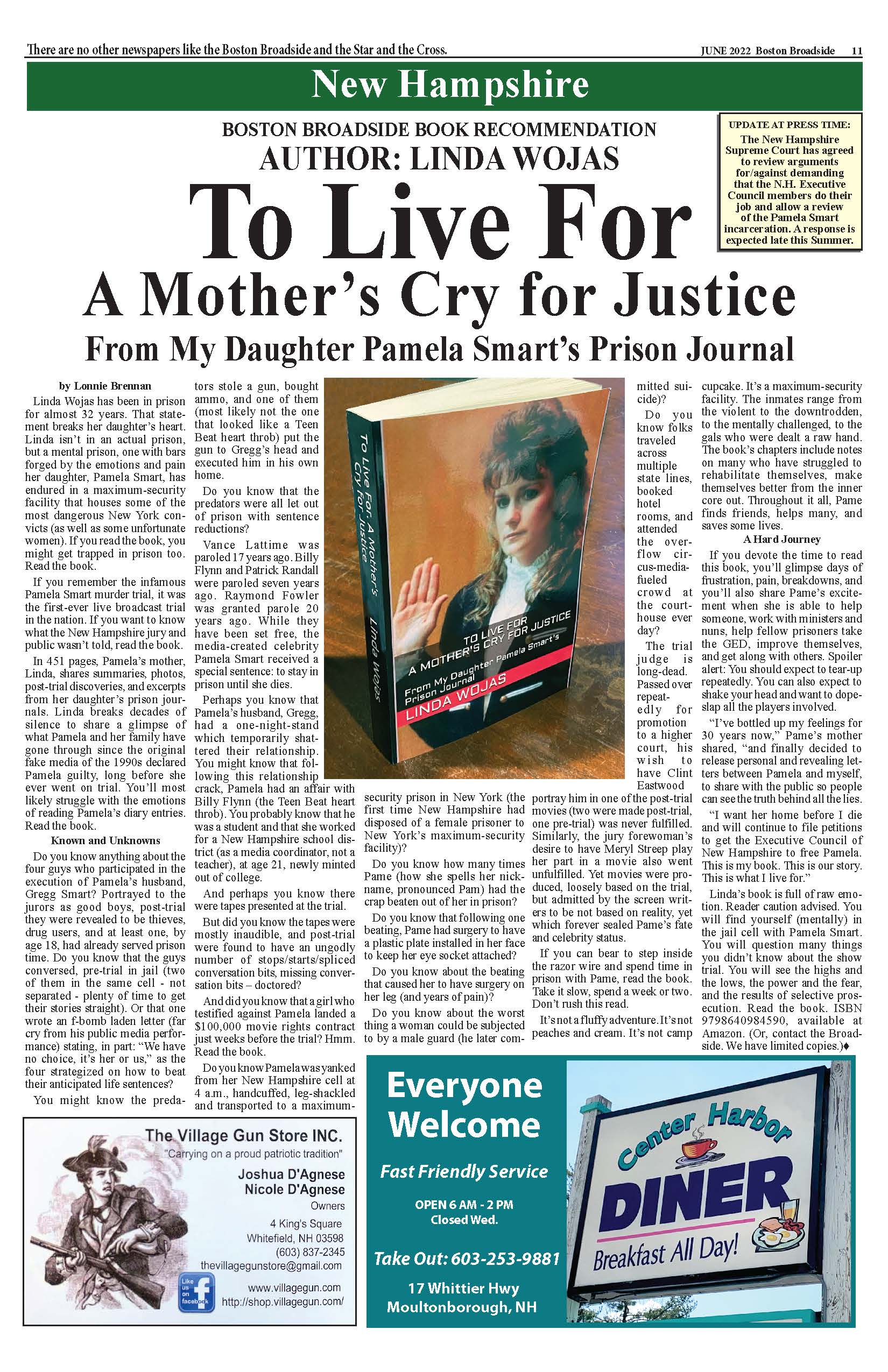 by Lonnie Brennan If you’ve followed the saga of the New Hampshire Executive Councilors, it’s a sad story of squishy politicians – politicians who can’t stand up to opposing views, Read More…

“The provisions of this bill have more holes than Swiss cheese, and I applaud the governor for vetoing it….”

N.H.: Mark Alliegro – Just One of the Reasons I’m Running

FROM OUR PRINTED AUGUST 1, 2020 EDITION by Mark Alliegro Candidate for State Representative I am a candidate for the State House to represent Grafton County District 7 (Campton) in Read More…