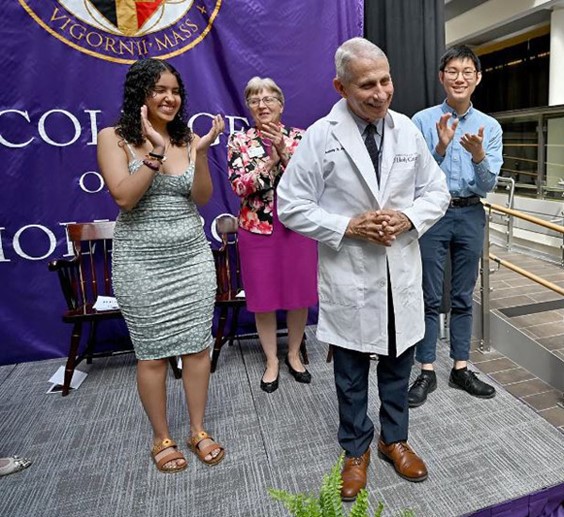 Dr. Anthony Fauci at the College of the Holy Cross on June 11, 2022 – photo screenshot from Catholic Action League

In a ceremony on Saturday, June 11th, the College of the Holy Cross in Worcester—founded by the Society of Jesus—rededicated the science buildings on its campus as the Anthony S. Fauci Integrated Science Complex.

Fauci, a 1962 graduate of Holy Cross, is the director of the National Institute of Allergy and Infectious Diseases and the Chief Medical Advisor to Joe Biden.

In an eight minute address delivered during the event, Fauci made a number of remarks which were interpreted by the news media as unsubtle criticisms of President Donald J. Trump. Fauci said that he advised “seven presidents of the United States — almost of all of whom actually listened to me…”

He went on to say that two Jesuit tenets guided his career: “Staying faithful to the truth, even truths that may be inconvenient to some,” and communicating with “precision of thought and economy of expression. And for some in Washington, that’s actually an oxymoron.”

In an interview, after the ceremony, with the Worcester Telegram & Gazette, Fauci warned of the “normalization of untruths” and went on to effectively compare opponents of coercive vaccine mandates to Nazis. Fauci asserted that the “incredible disinformation campaign” conducted in Europe in the 1930’s, “led to some horrible things that occurred prior to and during World War II.”

“I’m not saying that’s going to happen now, but be careful,” he said. “We’re treading on thin ice here, when distortions of reality and distortions of truth become commonplace.” Fauci then claimed that misinformation is “an existential threat.”

In the interview, Fauci commended the recent speech by Barack Obama, calling for more censorship in social media.

A group of protesters picketed the event, one holding a sign denouncing “Unholy Cross.”

A proponent of mask mandates and vaccine mandates to combat Covid-19, Fauci has accused those seeking religious exemptions to forced vaccination of using religion to mask their personal philosophical objections to vaccine reception.

In February of 2022, Fauci was criticized for spending tens of millions of tax dollars to fund gruesome experiments on animals using fetal tissue from aborted children.

Fauci, in an address to the UN’s World Health Organization (WHO), on behalf of the Biden Administration, on January 21, 2021, said “It will be our policy to support women’s and girls’ sexual and reproductive health and reproductive rights in the United States, as well as globally.”

“To that end, President Biden will be revoking the Mexico City Policy in the coming days, as part of his broader commitment to protect women’s health and advance gender equality at home and around the world.”

The Mexico City Policy, first instituted by Ronald Reagan, and reinstated by Donald Trump, prevented the use of American tax dollars for abortion abroad. Fauci also announced that the Biden Administration would reverse Donald Trump’s decision to withdraw from the abortion affirming WHO.

The Catholic Action League called the decision of Holy Cross to honor Fauci “another betrayal of the Author of Life by an apostate institution deeply embedded in the Culture of Death.”

Catholic Action League Executive Director C. J. Doyle made the following comment: “In honoring Fauci, Holy Cross advertised, once again, its rejection of Catholic morality and its subservience to elite secular culture. It reminds us that the purpose of Catholic higher education in America is to produce professionally successful bourgeois conformists.”

“Fauci’s assertion that any criticism of him is ‘disinformation’ and that his opponents resemble Nazis is hardly conducive to civil discourse in a free society. Some cynics might conclude that a free society is the last thing Anthony Fauci wants.”

“Arrogance is not one of the Gifts of the Holy Ghost. In his remarks on June 11th, Fauci said he learned philosophy, epistemology, metaphysics, psychology, ethics and logic at Holy Cross. Apparently, he missed the lecture on the Seven Capital Virtues, the first of which is humility.”

compiled by COMFLM Summary of Two Vaccine Injuries The 42-year-old wife of a Trooper received the Moderna shots in February and March.  Immediately after the shots, her heart rate increased.  Read More…