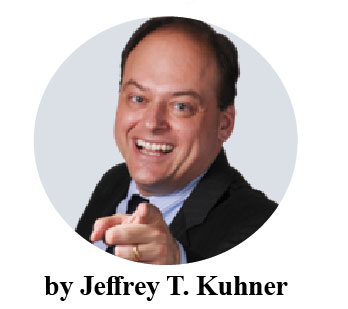 New Hampshire Gov. Chris Sununu has declared war on conservatives and constitutionalists. His recent behavior shows Sununu is an establishment RINO bent on persecuting—and humiliating—anyone who stands in his way.

On Oct. 13, at a state Executive Council meeting, the New Hampshire governor clashed with fellow Republicans. Sununu wanted the GOP-dominated council to approve $27 million in federal funding to deal with Covid-19. The council has the authority to veto any contracts sought by the governor that are worth more than $10,000. Sununu urged the council to green light two federal contracts totaling $27 million, arguing the funding was necessary to expand vaccine outreach and boost the state’s immunization efforts against the coronavirus.

During the debate, however, Sununu revealed himself to be not only a puerile buffoon, but a political thug. When Republicans rightly demanded that he follow other GOP governors, such as Florida’s Ron DeSantis and Texas’ Greg Abbott, and oppose Joe Biden’s draconian federal vaccine mandate, Sununu balked.

“I appreciate you have reservations, but they’re based on fantasy,” he said.

Sununu then explained that having the state government tell a flower shop owner that he is unable to fire someone because they are unvaccinated is not just government overreach. It is an unacceptable restriction and assault on the private sector.

“You can’t say the Biden administration is forcing a mandate here, and we have to stop it, but the state government should institute a mandate here and force it to stop the way we want it,” he said. “That isn’t even socialism; that actually is pure communism.”

Nothing could be further from the truth. In fact, communism—sorry, “pure communism”—would result in the state nationalizing and owning the flower shop (communism champions government ownership of the means of production and seeks to abolish all private property). Moreover, according to Sununu, DeSantis and Abbott are now Soviet-style Marxists simply for opposing Biden’s vaccine mandate? It is pathetic.

No one can wrap surrender in high principle better than cowardly elitist RINOs. They are Vichy Republicans.

Republican councilors were correct in opposing Sununu’s funding request. First, the money came with federal strings attached, directly undermining New Hampshire’s sovereignty. In particular, as many opponents pointed out, one of those strings is that New Hampshire would have to comply with a quarantine order should it be issued by the Biden regime. That’s right: In theory, under the funding arrangement if Biden administration officials decided to establish quarantine or detention camps for unvaccinated New Hampshire citizens, then the state would be required to submit. For example, this is exactly what’s happening in Australia (and to a lesser extent, Canada and New Zealand), where unvaccinated individuals who test positive for Covid-19 are placed in quarantine camps—the modern-day equivalent of internment camps. Sununu should be ashamed of himself for cavalierly dismissing these valid, legitimate concerns.

Second, Biden’s national vaccine mandate is a frontal assault on medical freedom and personal choice. The mandate is illegal, unconstitutional and dictatorial; it seeks to erect a system of medical apartheid and segregation. It forces health care workers—including doctors, nurses, paramedics, administrators, and first responders—to take the vaccine. Moreover, it compels private sector employers, who have more than 100 employees, to mandate the vaccine for everyone in the workforce. This will impact over 80 million workers (myself included).

Hence, countless Americans are faced with this harrowing choice: the jab or your job. According to Biden’s draconian mandate, one’s vaccination status determines whether one can earn a living, feed their family or keep their job. It is government-sanctioned persecution and discrimination against the unvaccinated. It is medical tyranny—pure and simple.

This is why DeSantis and Abbott (and other Republican governors) refuse to enforce Biden’s mandate, declaring it authoritarian and an egregious violation of basic rights and liberties. It strikes at the very heart of human freedom: autonomy over one’s body. Biden’s mandate is declaring that the all-powerful federal Leviathan can force citizens to inject an experimental medication into their arms or else lose their right to earn a living, go to school and engage in mainstream society. It turns the unvaccinated into social pariahs and lepers—third-class citizens, who are stripped of their civil rights and constitutional freedoms.

It’s no wonder the council voted 4-1 to reject the funding. The sole Democrat on the council supported Sununu’s request, which should tell you everything you need to know.

Yet, even worse than Sununu’s feckless betrayal of his voters and GOP principles, was his thuggish behavior at the meeting. The council meeting was packed with attendees, including an overflow crowd outside. Many were previous protestors, who for weeks prior had been holding signs, participating in rallies and were loud, outspoken opponents of Biden’s vaccine mandate and Sununu’s demand for federal funding. This time, however, the protestors were silent. For over an hour, they sat, watched, listened, while some held signs, but no one said anything disruptive or did anything to interfere with the council meeting. In fact, the attendees were practically silent. The only “protest” they engaged in was when Sununu spoke some of them stood up and silently turned their backs on him. That’s it. No yelling, screaming, shouting, chanting or physical displays of intimidation or potential violence of any kind. The video of the event doesn’t lie.

It didn’t matter. Angered and humiliated at having been defeated, Sununu ordered over 20 state troopers to begin patrolling the room. There were dozens more outside the council meeting. And then—one by one—his Gestapo thugs began to arrest and escort out of the meeting silent, peaceful attendees. One was a 70-year-old woman, who held a sign. She had done nothing, except quietly sit and listen throughout the entire meeting. Another was a mother holding her 4-year-old son. Then it was a nurse, who was sitting silently and holding her hands in prayer as she listened to the debate. Their real crime: They were known protestors who, for several weeks, had publicly dared to challenge and speak out against Sununu’s pro-funding, pro-mandate agenda. Sununu engaged in naked political retribution and revenge. In total, nine individuals were arrested on bogus, trumped up charges of disorderly conduct. 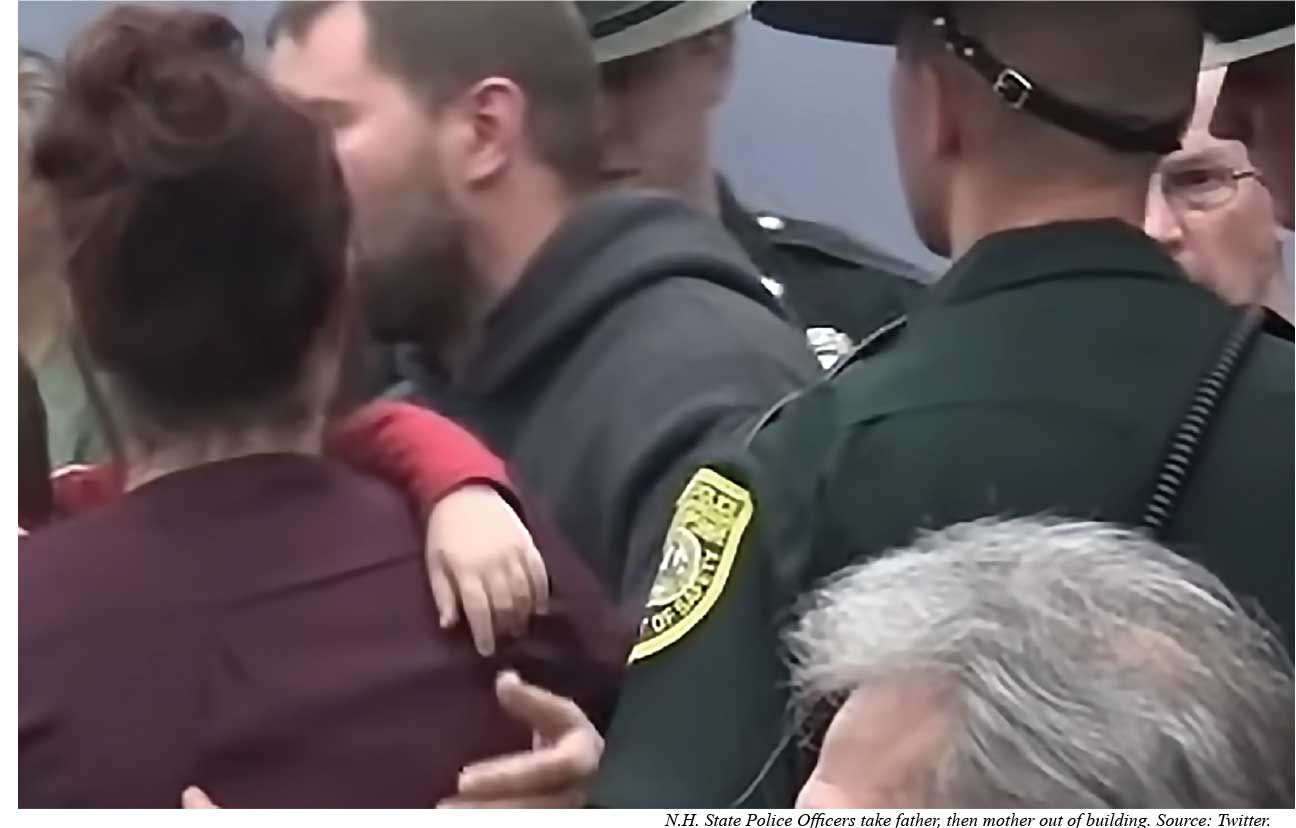 Moreover, on video, Sununu can be seen texting furiously as the arrests were slowly being made, as well as nodding his head and moving his eyes to obviously signal to the state troopers which people he wanted arrested and thrown out of the room. In short, he unleashed his goons to arbitrarily arrest and punish his critics. This was the act of a wannabe dictator, who is slowly turning New Hampshire into a police state. The law enforcement officers who participated in the arrests should be ashamed of themselves. They were aiding and abetting Sununu’s lawless, criminal behavior. Hopefully, some of them—and it only takes one—will speak out and blow the whistle on Sununu.

Ultimately, there needs to be a full investigation into Sununu’s blatant abuse of power and assault on the civil rights of these nine arrested protestors. Sununu thinks he will be challenging Democratic Sen. Maggie Hassan in 2022. I have news for him: You can’t win the Republican nomination—never mind the general election—by declaring war on your conservative base. And that’s precisely what he’s done. His latest actions show that Sununu not only has no business calling himself a Republican. But he needs to be kicked out of the governor’s office. And the entire corrupt, inept Sununu political dynasty should be swept into the dustbin of history.

Jeffrey T. Kuhner is host of “The Kuhner Report” on WRKO AM-680 in Boston. His daily show airs 6:00-10:00 am EST. He can be reached at: JeffreyKuhner@iheartmedia.com

Homes For Our Troops to Kick Off Building of Specially Adapted Custom Home for Injured Soldier in Derry, N.H.