FROM OUR OCT 2019 PRINTED EDITION

Did the Past MassGOP Leadership Commit FIDUCIARY FRAUD?

BOSTON – If you raise $15 million telling donors you are going to support the election of Republican candidates, but instead spend up to 96% of the money on parties, perks, overhead, well-connected consultants and other items, did you commit fraud?

That’s the question now being asked in quiet, hushed circles amongst some local GOP donors, as more and more digging into the past several election cycles reveals large gaps between donor expectations and actual MassGOP expenditures.

While most of the recent attention by local media on certain questionable expenses during the 2017-2018 election cycle ($146,152 on parking, $226,400 on travel, $776,563 on polling, etc.) as well as perks continue to taint the past and now retired or ousted MassGOP leadership, many more questions remain.

According to records made available through the Massachusetts Office of Campaign and Political Finance (OCPF) and the Federal Elections Commission (FEC), as well as various internal documents and compilations obtained by the local press from within the MassGOP, the lavish parties, perks, and expenditures made by prior MassGOP officials and/or consultants hired by those officials may constitute a fiduciary breach.

Most plainly, what the daily papers and the talk radio shows have discussed for months now appear to have deeper roots, as both public and private records obtained by the Boston Broadside indicate that expenditures made by certain past officials could lead to closer scrutiny, and some have stated that this could possibly result in determination of fraud. Criminal fraud. 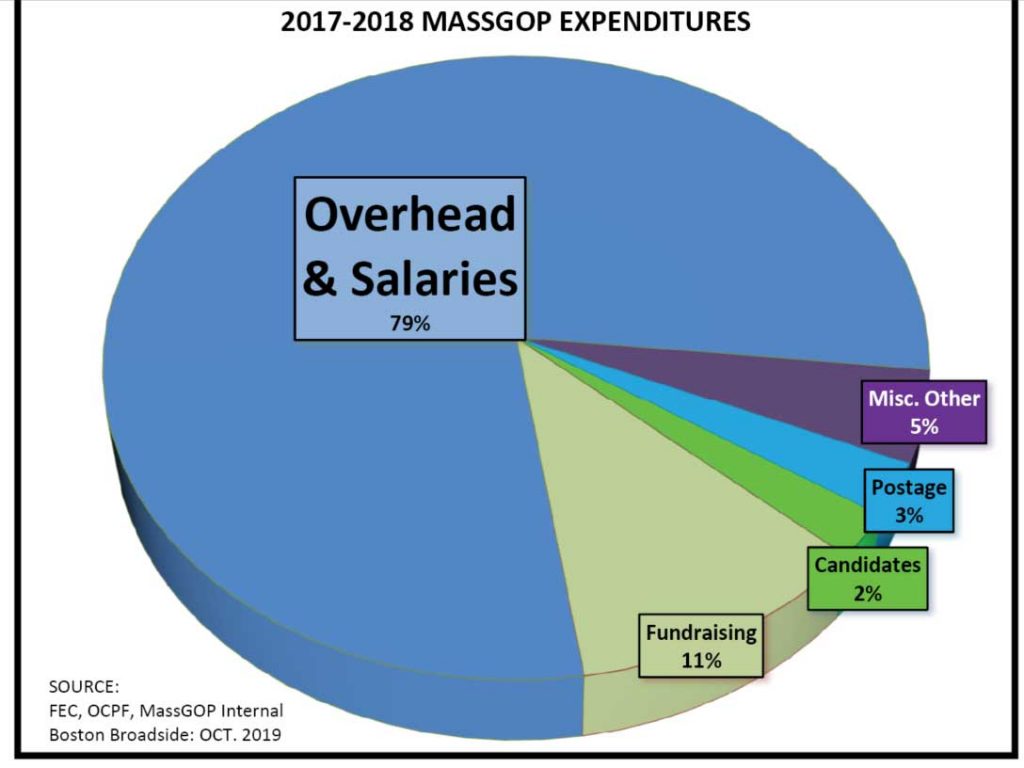 In the 2017-2018 election cycle, the MassGOP raised a lot of money. The MassGOP spent $9,291,510 through their general funds and an additional $6,047,714 in their Victory Fund, for total expenditures of $15,339,224. However, with internal memos and external campaign data revealing that more than 80% of funds were spent on overhead, salary, and parties, with perhaps as much as 96% being spent on non-candidate spending (when one adds in parking perks, polling, consultants and such  –  see below and chart), the paltry expenditure on candidates might help explain recent Republican losses.

Republicans again lost seats in the last election cycle, as Massachusetts settled deeper into the blue fog of Democrat-crushing control of the House, Senate, and every statewide office with the exception of the governor. The Republicans also lost a high-profile sheriff’s seat.

Numbers released to the MassGOP State Committee, the 80-member governing board of the Republican Party in Massachusetts, by newly elected MassGOP Chairman Jim Lyons revealed a host of expenditures which appeared out-of-bounds for the organization.

Subsequent to the release, additional details continued to leak out and became fodder for local writers and columnists as well as radio talk show hosts who bristled at the spending. At least one recounted similar lavish behavior by certain State Committee members who magically received certain perks, including near-front-row reserved seating for a July 4th fireworks celebration on the Esplanade (including accusations of  being transported to their seats on golf carts rented through taxpayer funds). Suffice to note there has been no shortage of stories being again brought to the forefront of memories from various past MassGOP missteps.

In the wake of the renewed criticism and public exposure of the past MassGOP shenanigans, Chairman Lyons organized an internal committee to examine the past actions and advise him on a future course. He has pledged to fully support candidates and eliminate unnecessary expenditures. For this he has come under public fire from certain individuals who have issued letters and e-mails, apparently trying to deflect attention to the matter, attack Lyons for exposing the financial information, or to silence any discussion of the past.

Indeed, more than one member of the internal committee from the Gov. Charlie Baker supporter contingency tried to get all committee members to swear to a vow of silence, stating that if word leaked out on what has been uncovered, no one would contribute to the perennial party-goers. Well, with the barn doors already wide open, that suggestion was rapidly dismissed. Indeed, more than one State Committee member has expressed intense concern that the current State Committee must seek the truth in all matters, and let the past chips fall where they may.

Moving forward, current members of the MassGOP said they need to be hyper-focused on being accountable to the donors and the candidates. ♦ 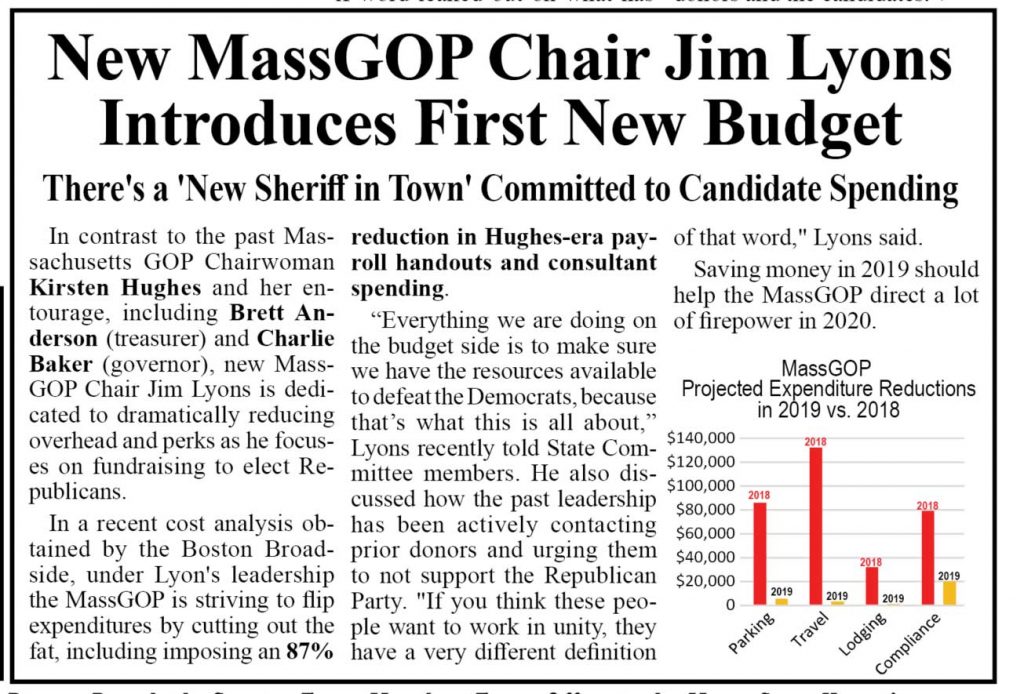 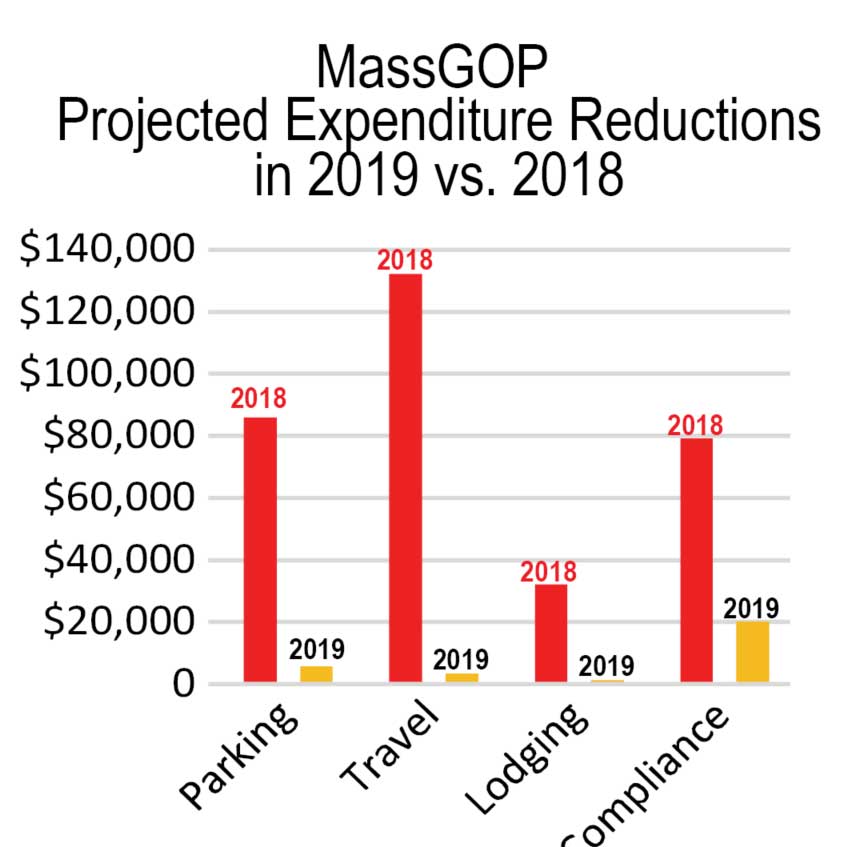 FROM OUR PRINTED OCT. 1 EDITION by Lonnie Brennan MASSACHUSETTS – The charts shown in the center of this publication [and attached below for online viewing] say it all: Gov. Read More…