Last month the Boston Broadside started listing some of the 1227 amendments proposed for the Massachusetts House budget this spring. As we stated, most of these had to do with either getting money for some project within a state representative’s district or adding money to a politically favored line item in the budget as approved by the House Ways and Means Committee. Both these actions curry favor with voters which turn out to be very helpful on Election Day.

In the end, almost all of these amendments got approved with no explanation or debate on the House floor – yet they add hundreds of millions of dollars to the budget. Why does this happen year after year? As we pointed out last month, the culture is corrupt: “You vote for my gazebo and I’ll vote for yours.” There is no fiscal discipline, and taxpayer money is treated as coming from an inexhaustible source.

In June we listed over 40 amendments which increased spending by more than $51 million, much of it for local projects where the towns or cities should have been picking up the tab. And we only scratched the surface.

This month we list another 40 plus amendments which passed and added another $23 million to the first amount for over $74 million to date. And we have a lot more to go in future issues.

In this batch of amendments, note that we actually have a gazebo request. Representative Colleen Garry of Dracut put in an amendment for a “Gazebo in Dracut” for an amount of “not less than $25,000.” Approved with no debate.

If the state will fund a gazebo in Dracut, why shouldn’t it fund a new gazebo in every town and city? 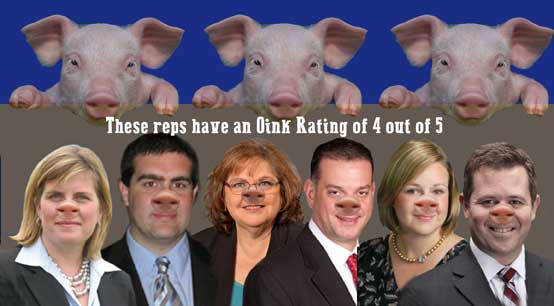 Also listed is the addition of $9,384,482 by Representative Daniel Donahue of Worcester to the Department of Corrections main account. We don’t know if this was necessary or not because, again, there was no discussion or debate on the House floor when this was passed. Perhaps half this amount would have been enough? Maybe even more was needed. We will never know.

However, what we do know is that the House Ways and Means budget had already allocated $615,539,903 to run the Department of Corrections and the committee felt that was sufficient.

You will also note various amendments for technology upgrades to schools, police departments and towns. We are sure these are all worthy items … but should the state be paying for them? Again, if the state is paying for a technology upgrade in the Dracut schools, why shouldn’t it pay for similar upgrades in everybody’s school? Imagine what that would do to the budget!

Finally, you will note that we seem to have a serial amendment abuser on the current list, Representative Colleen Garry of Dracut. There is apparently no local project she thinks the state should not cough up the money for and she delivers. I’m sure her constituents are proud of her efforts … while the rest of us wonder why the state is talking about raising taxes.

Oink! Oink! More pork next month with Part 3 of this series  ¨

Pork Sample #2: Taking Money From Workers and Taxpayers, Giving it to Pet Projects (more next issue)

It’s Us vs. the Mainstream Media: Support The Boston Broadside

Fourth of July TRIPLE-Header: AVA SINGS: God Bless America Sung by Ava: TED TRIPP: ‘I Pledge Allegiance to the Flag of the United States of America …’: Who Wrote It and Why?; RED SKELTON