This is the fifth installment in our blockbuster series about abuse of the budget amendment process in the Massachusetts House of Representatives. The age-old way in which our elected officials amend the budget has morphed into a slick and sleazy procedure by the speaker in which hundreds of millions of dollars (or much more) in pet projects are added to the budget without debate. This out-of-control spending is one of the reasons there is a budget problem every year and the governor is forced to veto a lot of the Legislature’s overspending.

This year the 160 elected members of your Legislature offered up 1,227 amendments, most of which sailed through without discussion or debate.

As we have mentioned previously, most amendments entail funds for some town or local entity within the representative’s district, or adding money to a politically or ideologically favored line item in the original House Ways and Means budget. Both actions endear solons with voters during re-election.

As in previous installments, the process of using state money for local projects is a time-honored tradition that drives up the cost for everybody. It exists because of the general attitude: “You vote for my gazebo and I’ll vote for yours.” In July we reported on Rep. Colleen Garry’s request for “not less than $25,000” to construct a Gazebo in Dracut. Why should taxpayers from cities and towns all over the state be paying to build a gazebo in Dracut? It’s not fair to taxpayers in other cities and towns.

In the first four installments of this Broadside series we listed $162 million in House amendments and almost $6 million in Senate amendments. Here we add another $20 million for a total so far of $188 million and we still have much more to add in the future.

Other amendments that deal with obvious state issues like regional transportation, general education, multi-district concerns and administrative actions have generally been left out unless they add money to a line item already in the budget.

Note on the list Boston Rep. Carmine Gentile’s $2,000,000 earmark to update an environmental impact study on a north/south rail link through metro Boston. The study will include: modern railway equipment and operating practices; updated ridership models; regional economic impact (including the impact on poverty reduction); health and environmental analysis (including greenhouse gas reduction); construction phasing and efficiency; and peer review. Whew! I guess you have to cover a lot of areas if you want to spend $2 million.

The call for a north/south rail link has been a constant since I was in baby clothes. If it ever becomes a serious project, it will make the Big Dig look like the construction of a gazebo in Dracut. This is like chasing after the end of the rainbow, but using our tax money to finance the journey. Somebody should just put a stop to it. Governor?

If you would like to review all 1227 House amendments in detail, go to https://malegislature.gov/Budget/FY2018/HouseDebate and just click on each amendment number.     ♦

Pork Sample #5: Taking Money From Workers and Taxpayers, Giving it to Pet Projects 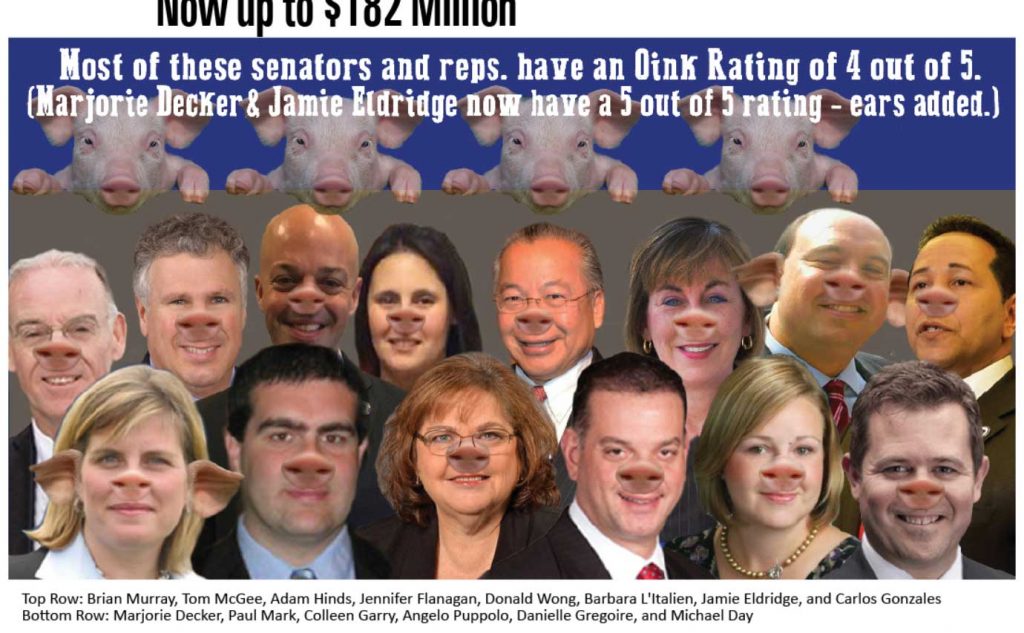 We Show You What They Didn’t: First Lady Melania Trump Visits Boston Medical Center – A View Inside the Building