by Ted Tripp
Political Reporter
It will take a lot to turn around the malaise of the last seven years. We have a record number of people on food stamps. We have a record number of adults not in the workforce. We have a record number of illegal immigrants in the country and they are still coming across the border in droves. A recent Gallop poll shows Americans’ confidence in our institutions is at its lowest level since 1993 when Gallop first started measuring this specific metric.
Presidential Candidate Rand Paul (randpaul.com) believes he has the solutions to turn around the country and bring America back to its former splendor as an economic powerhouse and a force for freedom.  He would accomplish this partly by reducing the size and reach of the federal government and adhering to the original intent of the Constitution as constructed by our Founding Fathers.
On Sunday, June 7, a rally was held for Rand Paul at the Boston Marriot Peabody Hotel at which he conveyed his vision for a new America to local supporters and activists. The event was organized by Republican National Committeewoman Chanel Prunier and former state representative candidate Brad Wyatt of Worcester.
Co-host Brad Wyatt began the rally with some welcoming remarks and then introduced Representative Leah Cole of Peabody who stressed the need for a government responsive to the people. Then Hannah Wyatt, the 11-year-old daughter of Brad, sang an inspiring rendition of the National Anthem to prepare the crowd for Senator Rand Paul.

Paul started off by saying, “I may be the least favorite person in Washington now,” referring to some of his opposing stands on legislation supported by both the administration and Republican establishment.
He talked about the president and how with this president when something goes wrong, it is always somebody else’s fault.
He spent some time speaking about the Fourth Amendment and as citizens our expectation of a right to privacy. He traced the origin back to the British 1760s Writs of Assistance which allowed the King’s soldiers to search the premises of colonists for virtually anything, and had no expiration date. These were hated by the New Englanders and John Adams even said these Writs were one of the main provocations leading to the American Revolution. 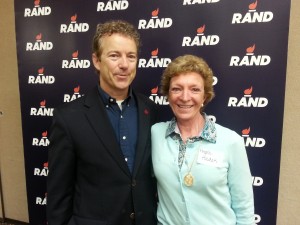 Senator Paul talked about his objections to the Patriot Act. He said it is simply government overreach. He stated that the NSA has 800 million hours of recorded audio from – the agency wouldn’t say. But the agency did say it doesn’t have enough people or time to listen to all of the audio. Rand wants us to be a lot smarter and limited in collecting data if we are going to use it to identify terrorists.

The senator also went on describing the government’s abuse of other constitutional amendments, like the Fifth Amendment. He said the government taking of property should be rare, and decried the Supreme Court’s Kelo decision of 2005. He is against civil forfeiture and mentioned the case of the Caswell Motel in Tewksbury where the feds tried to seize it from local family ownership because of some minor drug transaction by others.
He talked about the Sixth Amendment, the right to a speedy trial, and the tragic story of a teenager in New York who was held for three years at Rikers Island on the suspicion of a robbery. He was eventually released with no charges brought against him.
Paul went on to describe further abuses by government in general and the Obama administration in particular against the First, Second and Tenth Amendments.

The overall message was obvious: Government is out of control and is ignoring the Constitution at the expense of our personal freedoms. We must get it under control by reducing its size and roll back many of the rules and regulations that are stifling our economic well-being.
Senator Paul’s message of “Defeat the Washington Machine – Unleash the American Dream” certainly resonated with the crowd as he received multiple ovations during his appearance. When he finished the talk, he graciously stayed around to have his picture taken with anybody who wished to meet him. Almost everybody took advantage of the opportunity.
Note: Since the senator visited Peabody, he has released his new Flat Tax Plan, the first candidate to announce an overhaul of the income tax system. You can view a summary of it here: http://www.cnbc.com/id/102769595.

RALLY!   TO DEMAND TRANSPARENCY IN WHAT OUR NEWTON SCHOOL CHILDREN ARE BEING TAUGHT.   TO STOP INDOCTRINATING THEM WITH SKEWED AND BIASED INSTRUCTIONAL MATERIALS. TO CALL FOR THE Read More…

MassGOP vs. The Grassroots of the Republican Party

The Empire is perched to strike back. In an attempt to extinguish any conservative voice from the MassGOP governing board (The Republican State Committee), the MassGOP has acted, along with Read More…

IMPORTANT PRE-PRIMARY ELECTION MESSAGE THE COUNTDOWN IS ON: We’ve LAUNCHED an initial press run of 100,000 copies of a “CONDENSED EDITION” of the this month’s Boston Broadside featuring this HISTORIC Read More…