FROM OUR PRINTED SEPT. 2019 EDITION

The mainstream media, as well as Massachusetts’ “very own” Elizabeth Warren, are not known for defending or respecting the thin blue line.  Many left-wing politicians and celebrity activists have been promoting an
anti-police agenda to boost their own careers. Mainstream
media organizations bury the heroic day-to-day actions of police and first responders. Considering recent events like the assaults on ICE facilities, NYPD officers being doused with water, and a police shooting in Philadelphia, it is safe to say law enforcement is treated as the enemy.

Massachusetts police officer and Army veteran Michael Chesna was killed in the line of duty in the summer of 2018. Responding to a call in a local neighborhood, the six-year veteran of the Weymouth Police Department confronted an erratic driver. The driver stole the officer’s weapon, fatally shooting Sergeant Chesna as well as an innocent Weymouth resident. This call would have been his last of the day, as he was about to finish his midnight to 8 a.m. shift.

The loss of Sergeant Chesna brought Weymouth together in a very special way. Blue lights and blue line flags still adorn surrounding towns in his memory. A memorial soccer tournament, organized just weeks after his final call, would provide healing for the officer’s family and unite the heartbroken citizen and police communities. 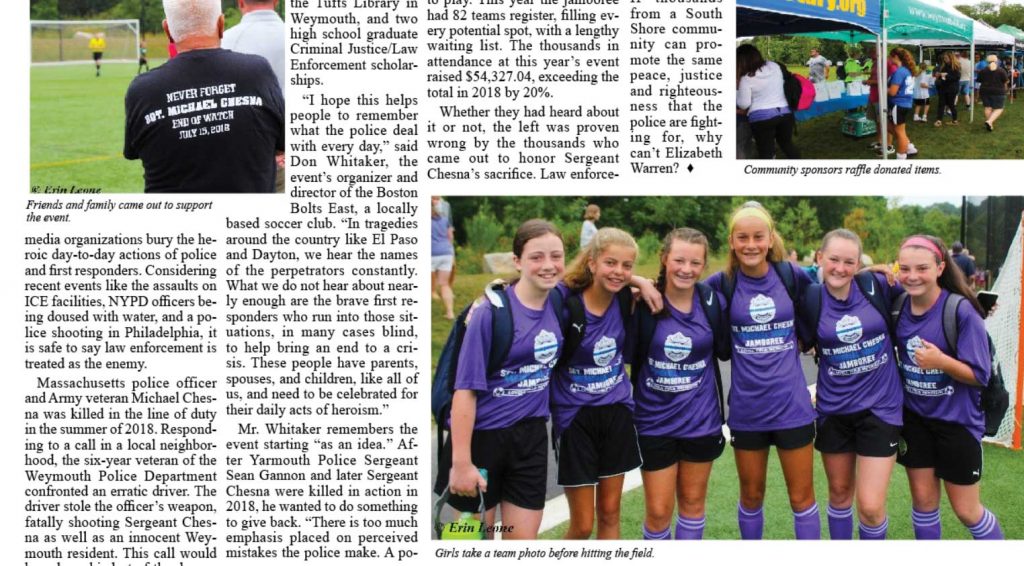 This August, the 2nd Annual Sgt. Michael Chesna Soccer Jamboree brought soccer players of all ages and their families together to celebrate the life of Sergeant Chesna and to salute the police force.  Members of the Weymouth police even took to the field for a few games. The event was packed with thousands of people, complete with food trucks, raffles and a DJ. Funds raised benefited the Chesna family, the Vera Adams Reading Room at the Tufts Library in Weymouth, and two high school graduate Criminal Justice/Law Enforcement scholarships.

“I hope this helps people to remember what the police deal with every day,” said Don Whitaker, the event’s organizer and director of the Boston Bolts East, a locally based soccer club. “In tragedies around the country like El Paso and Dayton, we hear the names of the perpetrators constantly. What we do not hear about nearly enough are the brave first responders who run into those situations, in many cases blind, to help bring an end to a crisis. These people have parents, spouses, and children, like all of us, and need to be celebrated for their daily acts of heroism.”

Mr. Whitaker remembers the event starting “as an idea.” After Yarmouth Police Sergeant Sean Gannon and later Sergeant Chesna were killed in action in 2018, he wanted to do something to give back. “There is too much emphasis placed on perceived mistakes the police make. A police officer’s life is something that cannot be taken for granted,” he said. “We need people to remember that and simply respect the police, allow them to do their job, and help them when we are able to.”

In last year’s tournament, organizers expected 20-30 teams to participate, having only a little over two weeks to prepare. Ultimately, 74 teams signed up to play. This year the jamboree had 82 teams register, filling every potential spot, with a lengthy waiting list. The thousands in attendance at this year’s event raised $54,327.04, exceeding the total in 2018 by 20%.

Whether they had heard about it or not, the left was proven wrong by the thousands who came out to honor Sergeant Chesna’s sacrifice. Law enforcement officers’ lives are not promised, certainly not in this day and age, when indescribable strength to bravely face the unknown every shift is required. They put their lives on the line, and are willing to give them up, even for the same people who mock and disrespect them. If thousands from a South Shore community can promote the same peace, justice and righteousness that the police are fighting for, why can’t Elizabeth Warren?  ♦

by Lawrence ‘Lonnie’ Brennan Planned Parenthood receives $1.4 million in taxpayer dollars each and every day of the year, and is responsible for killing a minimum of 327,653 unborn babies, Read More…