by Lonnie Brennan
Broadside Staff
Planned Parenthood receives $1.4 million in taxpayer dollars each and every day of the year, and is responsible for killing a minimum of 327,653 unborn babies, each and every year, according to its latest published annual report.
The non-profit reported 41% of its income comes directly from taxpayers in the form of $528.4 million in government grants and reimbursements.

Most interesting, the officers fill the majority of their annual report with pages and pages touting their education and other non-medical program services, a full 65% of their expenses are medical services, including the 327,653 abortions. Their annual report and website are long in the tooth on promoting women’s health education, but reveal that only 16% of its expenditures are on non-medical program services. A remaining 12% is spent on management and general support, 5% on fundraising, and 1% on “other.”

Planned Parenthood was exposed in late July by a series of undercover videos of top abortion doctors haggling over the sale of baby parts.

Democrat Activist and Planned Parenthood President Cecile Richards ($600K salary at a “non-profit”) was quick to respond that the video clips were taken out of context. The Obama administration was quick to condemn and threaten investigation and possible prosecution of those who obtained the undercover videos. President Obama replied with praise for all that Planned Parenthood does, including adding a specially timed “God bless Planned Parenthood” shout-out in its defense.

Meanwhile, more and more Americans have seen for themselves the  Mengele-like discussions of multiple Planned Parenthood doctors discussing employing “less crunchy” methods to destroy unborn babies in order to harvest vital organs, for sale at $100 per specimen, cash.

The Center for Medical Progress has released three videos so far, from its nearly two-and-a-half-year sting operation in which actors posed as employees of a biotech firm to get cozy with key Planned Parenthood doctors and administrators. In total, more than six hours of video are slated for release, from more than 65 interviews with Planned Parenthood employees.

Locally, Mass. Represenative James Lyons, issued a letter to the state attorney general, Democrat Maura Healey, requesting “that your office conduct an immediate investigation to determine whether PPFA affiliates in Massachusetts may have violated the law.”

Ms. Healey is not expected to take any action except for her reported phone call with Planned Parenthood which she related to the local papers that Planned Parenthood told her that they don’t break any laws, don’t sell body parts.  Another thorough investigation, not.

Rep. Lyons. in his letter (first page at left) to the attorney general shows a direct conflict with her phone conversation ‘investigation,’ in that the video and its transcript shows a Planned Parenthood director refering to Massachusetts as “huge” and stating that it has “a very developed research program.”

Rep. Lyons notes that “Massachusetts General Law Ch. 112, Sec. 12J prohibits, except in very limited circumstances, knowingly selling, transferring,  distributing, or giving away any fetus (unborn baby). This law also prohibits the performance of an abortion where part or all of the consideration for said performance is that the fetal remains (body parts) may be used for experimentation or other kind of research or study. Violation of this statue is punishable by imprisonment in a jail or house of correction for not less than one year nor more than two and one-halfyears or by imprisonment in the state prison for not more than five years and by the imposition of a fine of up to ten thousand dollars. 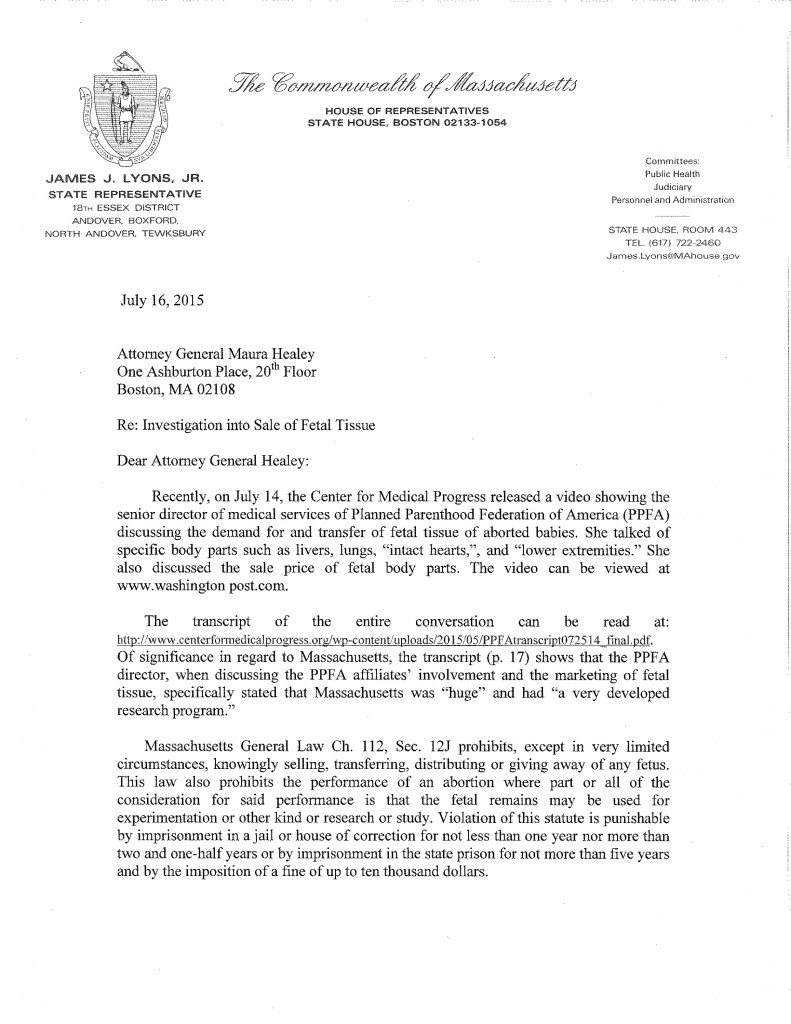 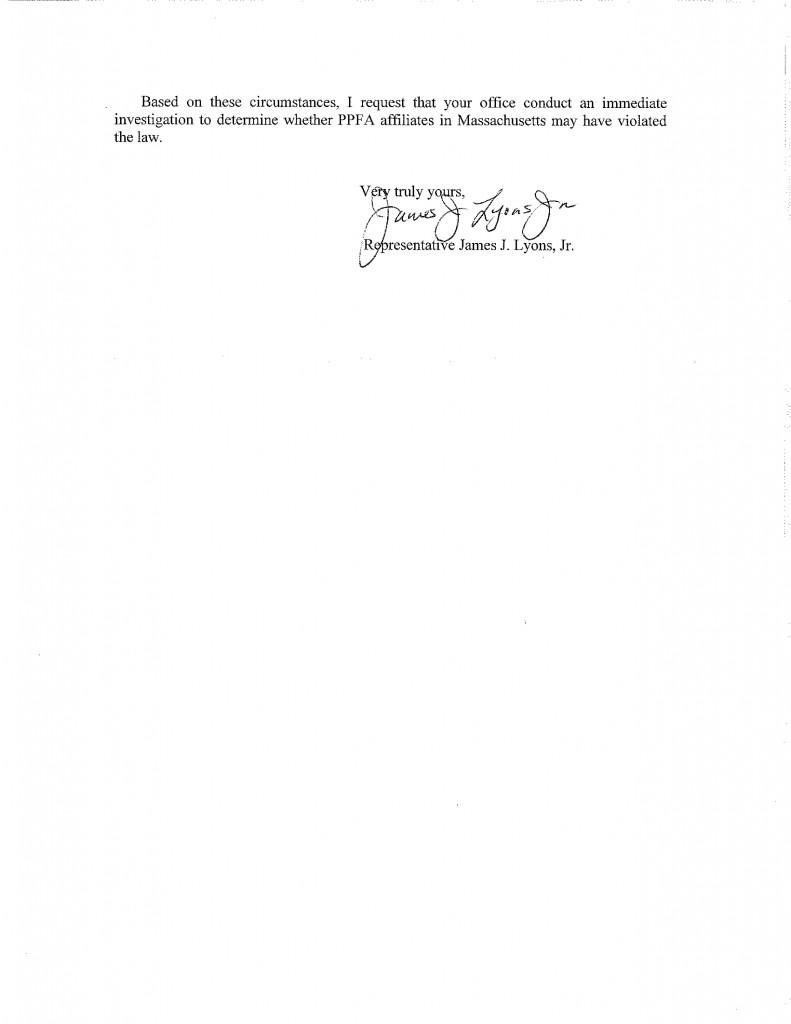 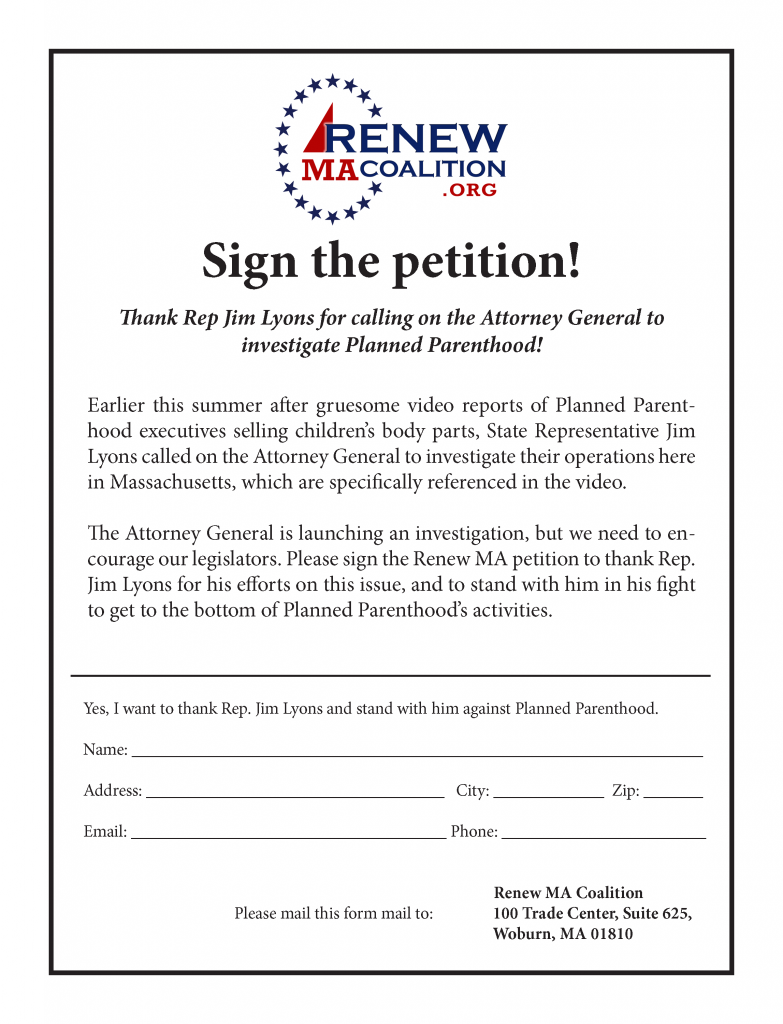 CHECK OUT ALL VIDEOS and GREAT NEWS AT www.MRCTV.ORG.

One Reply to “Rep. Lyons Calls on Attorney General to Investigate Planned Parenthood”