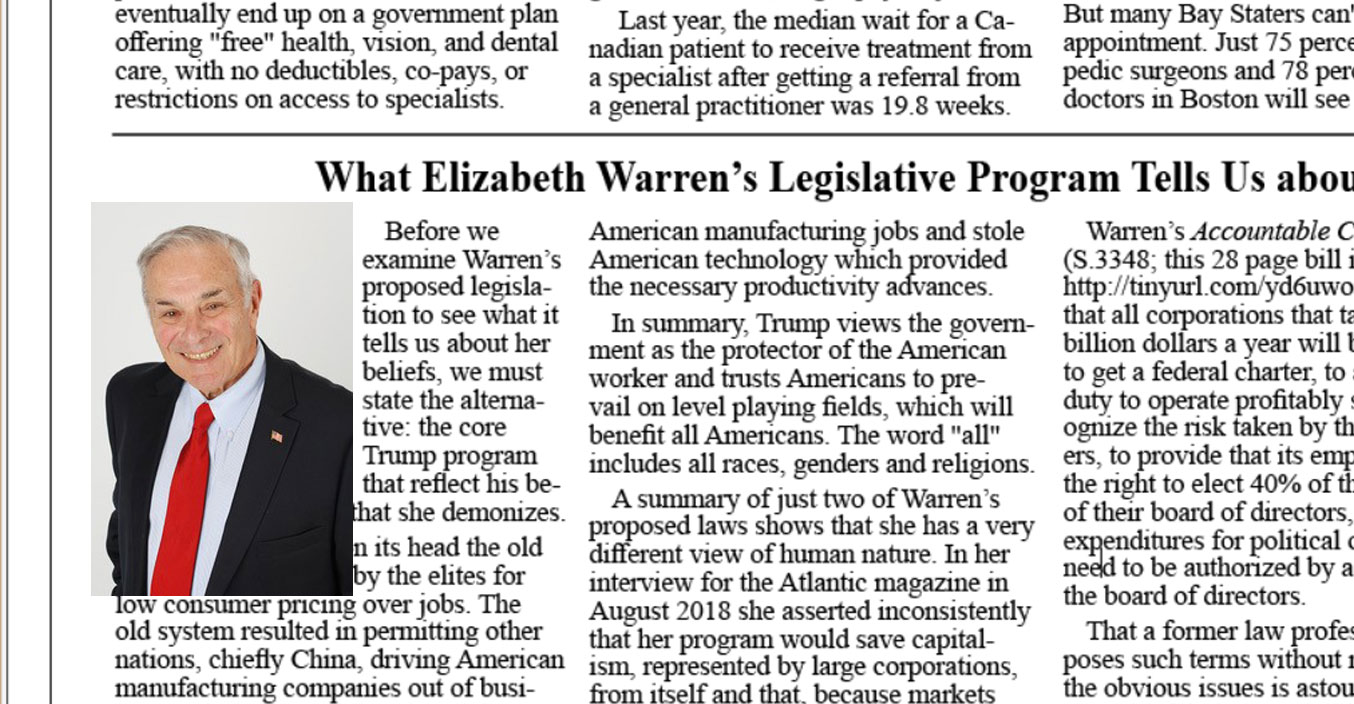 Before we examine Warren’s proposed legislation to see what it tells us about her beliefs, we must state the alternative: the core Trump program that reflect his beliefs and the policies that she demonizes.

Trump has turned on its head the old economic preference by the elites for low consumer pricing over jobs. The old system resulted in permitting other nations, chiefly China, driving American manufacturing companies out of business with the loss of American jobs, but allowed the American consumer to purchase a package of underwear for a dollar less.

Trump values the American worker first, recognizing the moral value of work and the dignity that only work provides. He also recognizes the fundamental truth that the modern, liberal democratic state, which requires substantial expenditures for social programs, is only possible without sky-high tax rates when there is long-run economic growth with moderate tax rates, fueled by technological advances that increase all three of productivity, wages and tax revenues. Thus, Trump’s policies require that he use the only leverage he has, tariffs, to force the Chinese to abandon their mercantilist policies that destroyed American manufacturing jobs and stole American technology which provided the necessary productivity advances.

In summary, Trump views the government as the protector of the American worker and trusts Americans to prevail on level playing fields, which will benefit all Americans. The word “all” includes all races, genders and religions.

A summary of just two of Warren’s proposed laws shows that she has a very different view of human nature. In her interview for the Atlantic magazine in August 2018 she asserted inconsistently that her program would save capitalism, represented by large corporations, from itself and that, because markets were rigged for the benefit of such large corporations which “scrape all the value off to themselves,” the remedy must be moral and not economic. Her view of human nature is profoundly simplistic and ideologically based and not founded on the complex way that capitalism actually works in the U.S.

Conservatives know that capitalism is based on the recognition that people act economically in their own self-interest, but that in the U.S. the behavior of capitalists is not governed by only naked self-interest. Capitalists are governed by numerous laws, regulations, customs and that the great majority of capitalists act subject to Judeo-Christian values. For instance, in 2018 just a few of the largest donors gave $14.7 billion to charity.

Warren’s Accountable Capitalism Act (S.3348; this 28 page bill is available at http://tinyurl.com/yd6uwoae) provides that all corporations that take in over a billion dollars a year will be compelled to get a federal charter, to abandon the duty to operate profitably so as to recognize the risk taken by the shareholders, to provide that its employees have the right to elect 40% of the members of their board of directors, and that all expenditures for political causes will need to be authorized by a 75% vote of the board of directors.

That a former law professor proposes such terms without recognizing the obvious issues is astounding. No one will risk their capital in corporations governed by people without skin in the game and, because workers will skim off capital to fund greater wages as in socialism, there will be no return on investment. The Supreme Court would probably rule that compelling a transfer of control of the corporation to entities other than the shareholders to be under the law of eminent domain. That the provision as to political financing is probably a violation of the First Amendment rights of free speech of the corporations seems to have escaped the notice of the professor (and her liberal, media supporters) is astounding because the Left has been rabidly complaining of the 2010 ruling of the Supreme Court in Citizens United that corporations have free speech rights.

Warren’s Anti-Corruption and Public Integrity Act (S.3357; the 289 page bill is available here:  http://tinyurl.com/y9fbrt6w) is draconian in its reach. It includes:

To enforce this Orwellian scheme, Warren provides for a new independent U.S. Office of Public Integrity. Our Founding Fathers knew that people are not angels, and, with Prohibition, we conducted a national experiment on that issue and found out the consequences. Under Warren’s regimen, only unsuccessful people who did not save for their future would want to serve.

As pointed out by Elizabeth Drew in her Vanity Fair article, “’She Has a Moralizing to Her’: Is Elizabeth Warren Actually ‘Unlikeable?’” (January 14, 2019)( http://tinyurl.com/y7kas2hd), even Warren’s fellow Democratic Senators do not like her. They think that she is self-righteous, doctrinaire, irritating and simplistic. That is a bad sign in a business that is all about building coalitions. Too bad that Massachusetts voters were not perceptive enough to agree.

Senator Warren revealed more about herself than she intended when she released her DNA results, which confirmed she has no real American Indian ancestry and videoed herself swigging a beer from the bottle instead of chardonnay from crystal in vain attempts to appear as just an ordinary citizen. She is ready to misrepresent herself, her beliefs, the way that capitalism actually works in the U.S. and the world in order to attain power over people. She should remind us all of the dangers of those who promise perfection if only they are given great power.    ♦

1 thought on “Snider on Warren: What Elizabeth Warren’s Legislative Program Tells Us about Her Grasp of Economics”