We have a great company with fantastic assets that are unique, extremely valuable and, in many cases, far more valuable than what was listed in our Financial Statements. Anyone with even a minor degree of financial acumen would recognize that these Statements of Financial Condition, prepared for the Trump Organization, are not audited—Which is also prominently highlighted in the Disclaimer Declaration on page one and two of the documents themselves. My company has among the best real estate and other assets anywhere in the world, has significant amounts of cash, and has relatively very little debt, which is totally current.  The Mazars June 30, 2014 Statement of Financial Condition, reported before I ran for President in 2015, contains, subject to review of the entire Statement, the following:

This does not include the estimated brand value from an earlier date. As stated by Predictiv, “In addition, the value of business development, licensing, television revenues and related income benefiting from the Trump brand were evaluated. Based on the information provided, it was concluded that the value of the Trump brand was in the $2.8 to $3 billion range.” Based on current enthusiasm and transactions which have or will take place, the brand value today could be, in my opinion, substantially higher. But even at the low number, this would impart a Net Worth of approximately $8 to $9 billion. Remember, when the Attorney General and or District Attorney say they think my financial statements may be high, I don’t even include these branding numbers in them, which is far more than any discrepancy they may have, if there is a discrepancy at all.

The accounting firm Mazars has been threatened, harassed, and insulted like virtually no other firm has ever been. They were essentially forced to resign from a great long-term account by the prosecutorial misconduct of a highly political, but failed, gubernatorial candidate, Letitia James, and the Hillary Clinton run District Attorney’s Office of Manhattan, where crime has reached levels not even thought possible, including the vicious killing of a thirty-five-year-old woman in her Chinatown apartment yesterday by a man who should never have been allowed to be on the streets. Murder and other crimes in Manhattan and New York have gone through the roof, some crimes by as much as 100%, as the Democrat run DA and AG spends historic amounts of time, energy, and money trying to “get Trump.” Lawyers from Hillary Clinton’s law firm, Paul, Weiss, Rifkind, Wharton & Garrison, have temporarily left the firm and gone to work in the District Attorney’s office in order to viciously make sure that “the job gets done.”

The actions of the AG and DA, including the Radical Left Westchester County DA who was a Trump hating contributor at MSNBC, reveal the vile and malicious intent that underlies the nonstop barrage of insults and threats aimed at me and the Trump Organization, including their years-long review of over nine million pages of documents that go far beyond the Statute of Limitations. Letitia James got elected by violently attacking “Donald J. Trump”, even though she knew nothing about me. Likewise, District Attorney Alvin Bragg “bragged” that he has sued President Trump over 100 times, more than anybody else. He is now working hand-in-hand with people from the law firm which is one of Hillary Clinton’s biggest donors. Chuck Schumer’s brother, Robert, is a partner and runs the firm. After many years as the District Attorney, the previous DA, Cy Vance, recently left without being able to charge anything other than a fringe benefits case about which the WSJ Editorial Board commented, saying “Manhattan D.A. Cyrus Vance Jr. and New York Attorney General Letitia James subpoenaed millions of documents and years of tax returns, and that’s all they’ve come up with.” They go on to say, “the political motives at work are transparent…[AG James] all but promised a selective prosecution—that is, pick a target, then search for a crime to allege…it looks like political targeting.” The charge against a 74-year-old long-term and wonderful employee is that he did not pay taxes on a company car or a company apartment (Do others pay such a tax? Did Cy Vance pay a tax on his car?), and a charge having to do with my paying for the education of his grandchildren. Murderers all over the city and they are worried about me helping with young children’s education? We may be the only company ever criminally charged by a District Attorney in a fringe benefits case. I believe Allen is innocent.

Mazars decision to withdraw was clearly a result of the AG’s and DA’s vicious intimidation tactics used—also on other members of the Trump Organization. Mazars, who were scared beyond belief, in conversations with us made it clear that they were willing to do or say anything to stop the constant threat which has gone against them for years. They were “broken” and just wanted it all to stop. I wish they had the courage to fight it out, but they didn’t, and who can blame them, but in their forced letter of surrender, Mazars does strongly state that all work was “performed in accordance with professional standards” and that there were “no material discrepancies in the financial statements.” The attached strongly worded and unambiguous Mazars Disclaimer Clause, or similar, is in each Financial Statement dating back many years. 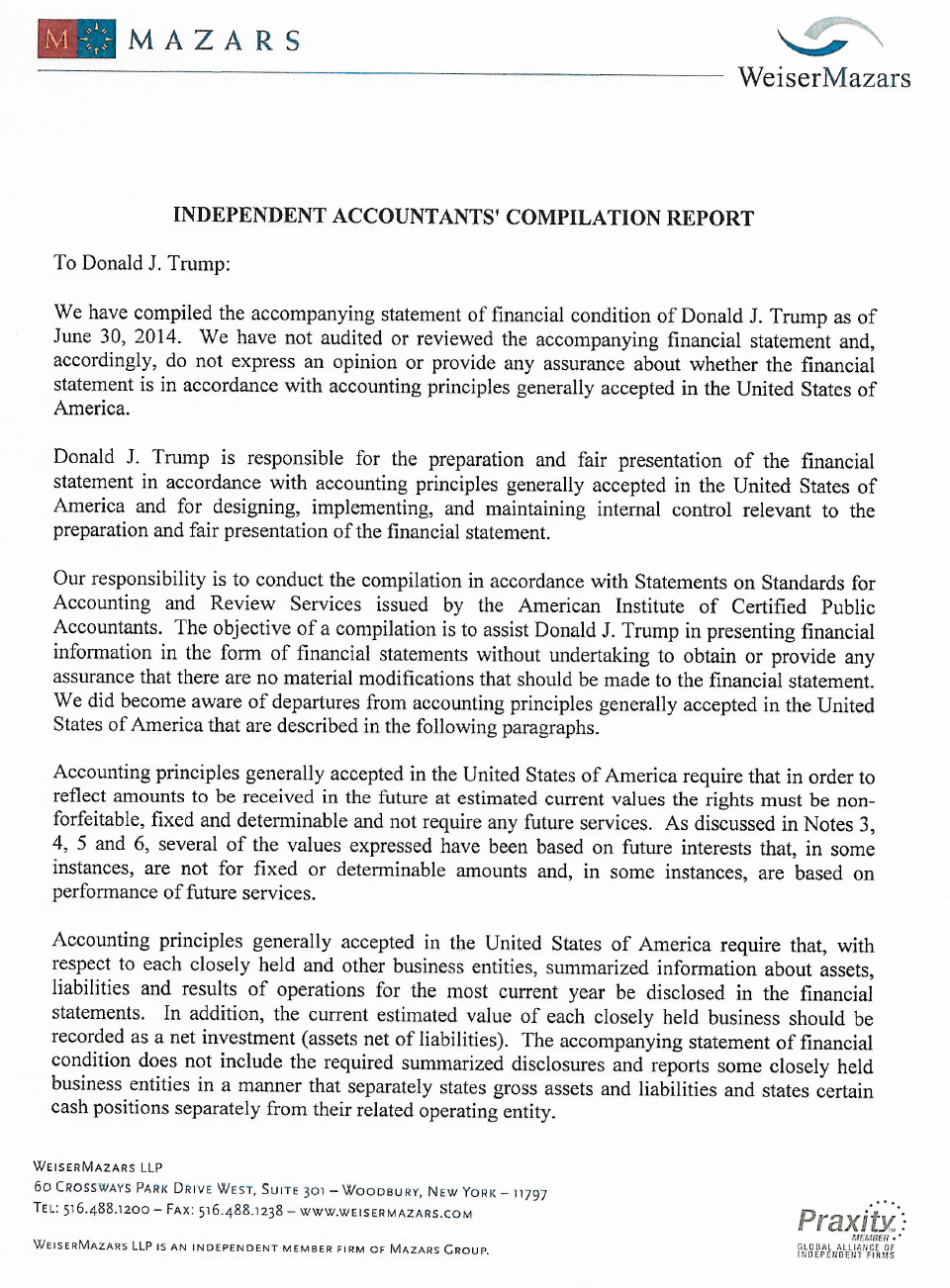 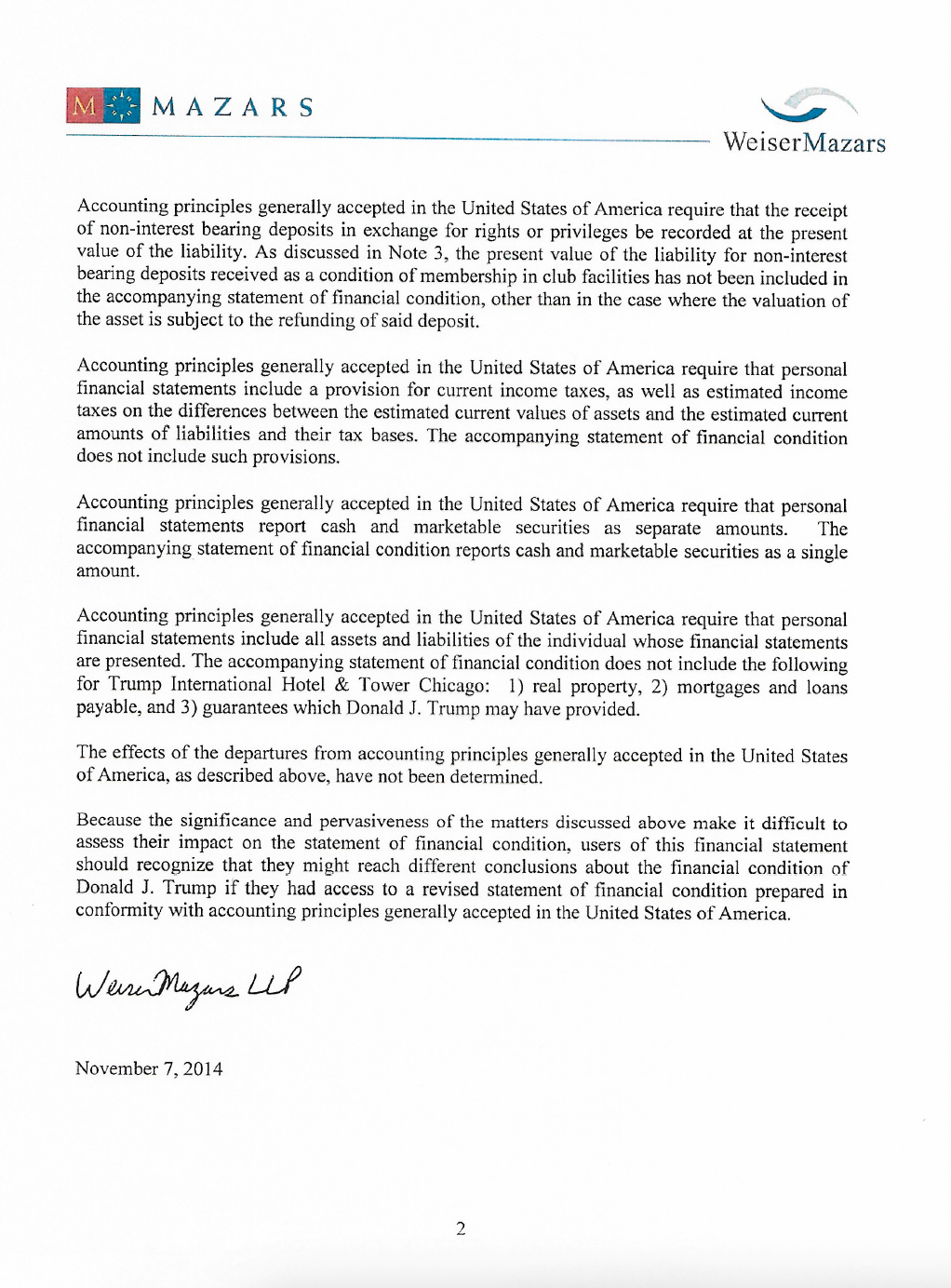 This crime against me is a continuation of a Witch Hunt the likes of which has never been seen in this Country before. From Russia, Russia, Russia, which has now been proven by the Durham findings to be a complete and total fraud, to the Mueller Report, Impeachment Hoax #1, Impeachment Hoax #2, and so much more, there has never been anything like it. The people of our Country are angry and upset, and losing faith in our system, and our Country itself.

Instead of this sham investigation of a great company that has done a spectacular job for New York and beyond, why isn’t law enforcement and the Fake News Media, which has been so destructive to our Country, looking into the fact that Hillary Clinton and her minions got caught SPYING into the office of the President of the United States, a crime so grave that it once called for the death penalty as punishment if caught. It doesn’t get any worse than that! After five years of constant bombardment, this political and racist attack must stop. Look to the murderers, drug dealers and rapists instead!

Some have asked. Anytime you wish to view a video of Donald J. Trump – for example, the Live broadcast going on right now (actually for the past six+ hours) Read More…

President Donald J. Trump is having a Make America Great Again Rally in Portsmouth, N.H., this Saturday, July, 11, 2020. It’s simple. Go to  www.donaldjtrump.com/events and click on the New Read More…