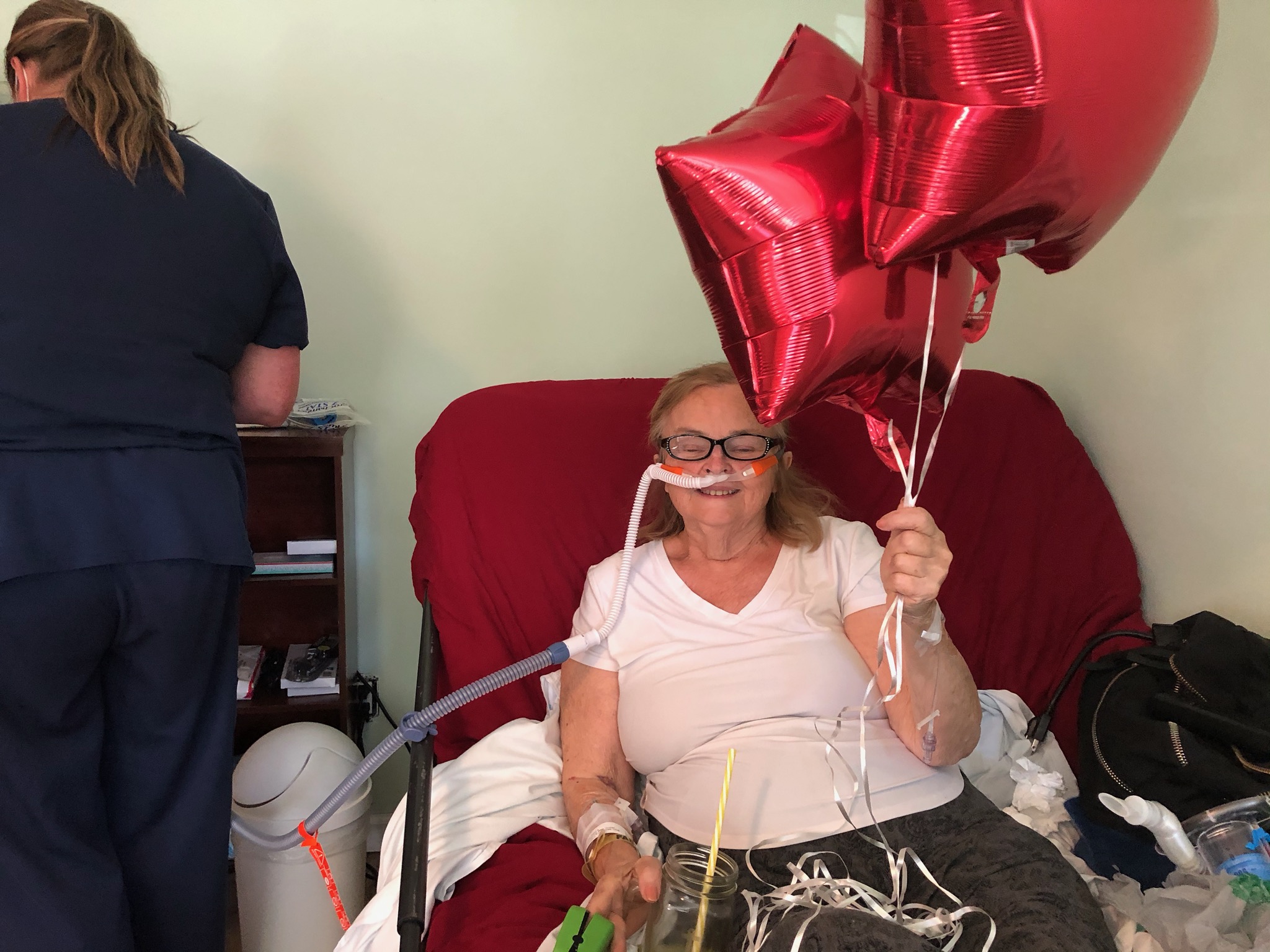 Tuesday Sept 14: Janet is out- released from hospital. Being cared for by her sister.

We’ve fielded a lot of calls and e-mails and such from folks asking about Janet.

The information provided below was posted and then updated multiple times and posted here (a tad late) describing Janet’s condition as related by family and friends.

AS OF 9/11, she’s still in the hospital, but hopes to transfer to other arrangements/facility. We’ll update when we know.

After about 6 days on her back, Janet was able to sit up on Thursday.

UPDATE:  Hospital has made her a “private patient” – denying she is there.

Deathly Ill Woman Denied Requested Treatment that Could Save Her Life

FROM FRIENDS OF JANET – == BURLINGTON, MA –  For several days, Janet Aldrich says she feels as though she is “in a hostile environment, being held hostage and tortured” at Lahey Hospital where she is being refused the treatment she has requested for double pneumonia.

“This is discrimination against people who have made the informed consent choice not to receive the experimental shot that is being pushed so hard across mainstream media around the world,” said the 78-year-old Hamilton resident from her hospital bed. “I have thoroughly researched this subject and I am confident that this is the best course of action to save my life at this time. Why would they deny me? I did not want a COVID test and they forced me to have one. I told them that I did not want to be put on a ventilator, and it was put in my records that I was a DNR (Do Not Resuscitate).  The doctor was just now in my room, yet again telling me I should be on a ventilator. It’s like they are out to kill me.”

Denying a patient their choice of treatment goes against the Lahey Hospital’s own Patient Bill of Rights, which is on their website. When asked about this, a Patient Safety Advocate who only gave the first name of Kathleen, said that “COVID protocols affect patients rights, and the patient may not be in a state to make the best decision.” When asked if that was deemed to be the case, would they then defer to her healthcare proxy, she said, “No. As long  as the patient is still conscious, they would not.”

Lahey’s actions defy the direction given by Aldrich’s son, Mark Aldrich, who has been appointed as his mother’s healthcare proxy. He has found the staff at Lahey to be condescending, as they dismiss alternative treatment as a “conspiracy theory.” Along with Janet’s sister, Patricia Lefebvre, the family members came to Massachusetts from the DC area to advocate for Janet’s health decisions. Armed with hard data about the effectiveness of the treatment protocol recommended by America’s Frontline Doctors, today they communicated to a medical team Janet’s wishes to have infusions immediately administered. Once again, the hospital refused the directive. The family is now seeking remedy and taking alternative actions. There will be a zoom hearing at Middlesex Superior Court, 10 am Friday, September 10th.

Lefebvre appealed to the audience of The Kuhner Report on WRKO radio this morning in an effort to save her sister’s life. https://www.iheart.com/podcast/658-the-kuhner-report-28754718
Protestors are gathering at the Lahey Hospital, which has been inundated with calls urging them to give the treatment to #SaveJanet. As a result, and once again violating the rights of their own patient, Lahey has now marked Aldrich as private, without the knowledge or consent of her or her family. Callers are now falsely being told she is not a patient at the Lahey Hospital. 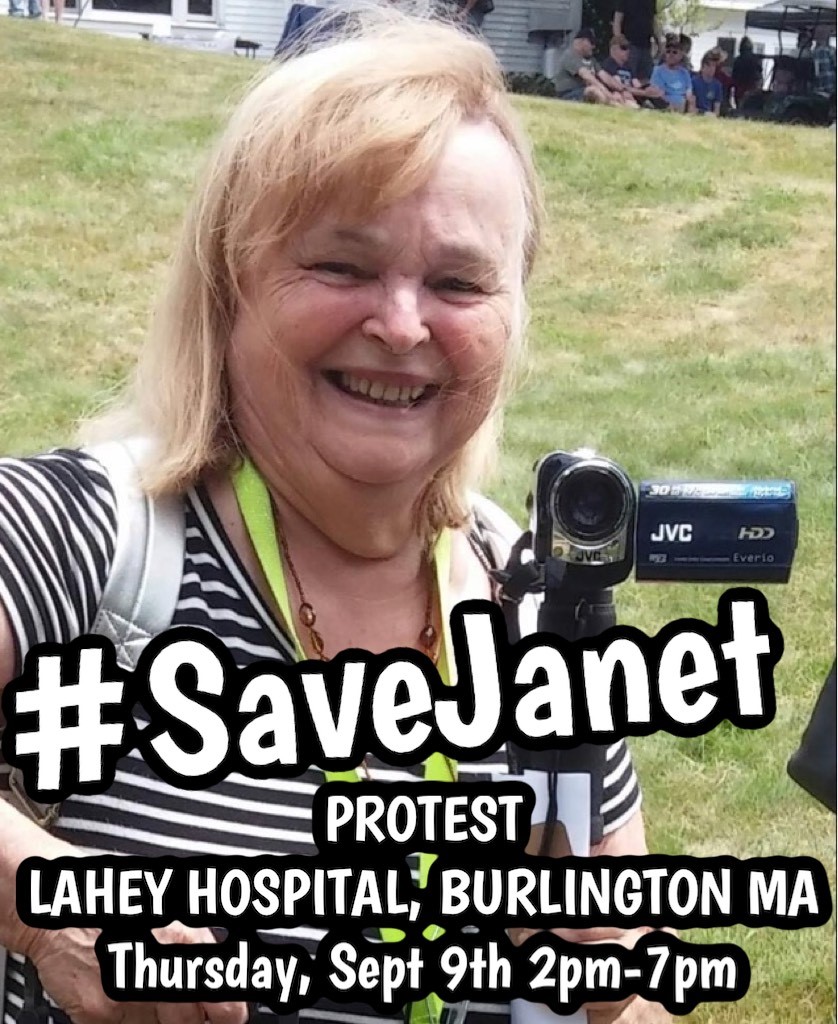 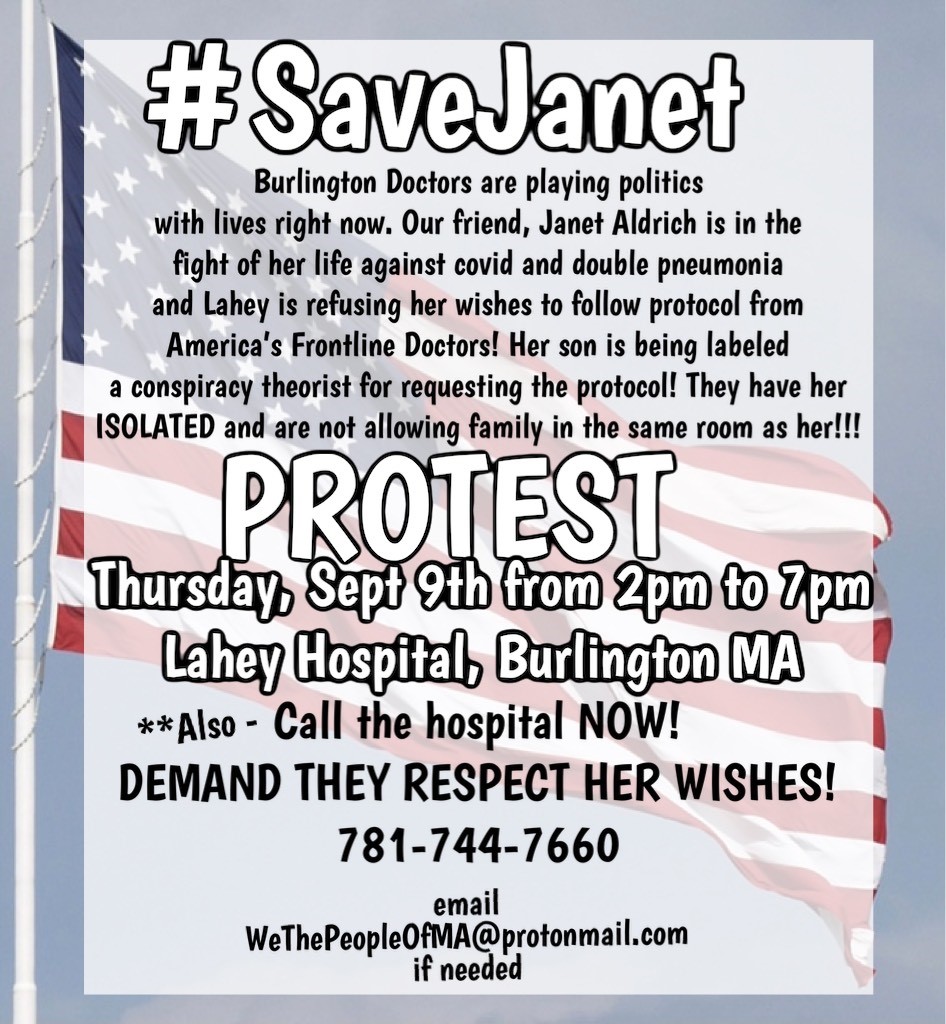 RESISTANCE TO VACCINE COERCION INCREASES– EXCEPT IN MASSACHUSETTS

by Massachusetts Catholic Action LeagueThroughout the United States, religious, legal and popular resistance to vaccine coercion is increasing. The Diocese of Fall River however, is moving in the opposite direction. Read More…