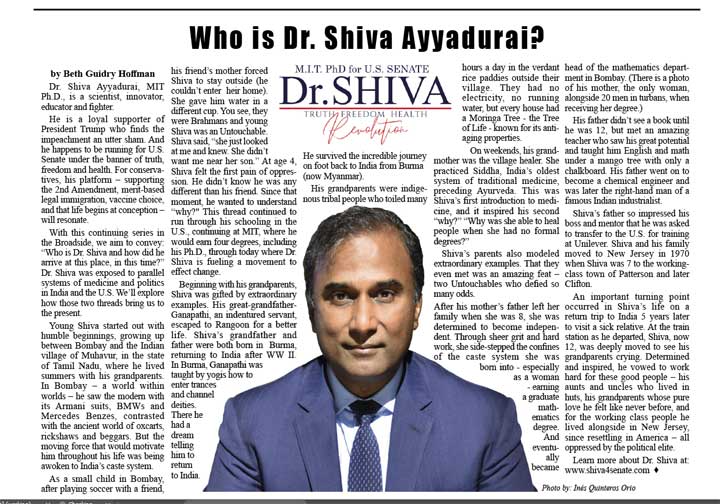 FROM OUR PRINTED JAN. 2020 EDITION (we tend to only post a few stories online, so if you see something, make the request and we’ll place it here)

He is a loyal supporter of President Trump who finds the impeachment an utter sham. And he happens to be running for U.S. Senate under the banner of truth, freedom and health. For conservatives, his platform – supporting the 2nd Amendment, merit-based legal immigration, vaccine choice, and that life begins at conception – will resonate.

With this continuing series in the Broadside, we aim to convey: “Who is Dr. Shiva and how did he arrive at this place, in this time?” Dr. Shiva was exposed to parallel systems of medicine and politics in India and the U.S. We’ll explore how those two threads bring us to the present.

Young Shiva started out with humble beginnings, growing up between Bombay and the Indian village of Muhavur, in the state of Tamil Nadu, where he lived summers with his grandparents. In Bombay – a world within worlds – he saw the modern with its Armani suits, BMWs and Mercedes Benzes, contrasted with the ancient world of oxcarts, rickshaws and beggars. But the moving force that would motivate him throughout his life was being awoken to India’s caste system.

As a small child in Bombay, after playing soccer with a friend, his friend’s mother forced Shiva to stay outside (he couldn’t enter  heir home). She gave him water in a different cup. You see, they were Brahmans and young Shiva was an Untouchable. Shiva said, “she just looked at me and knew. She didn’t want me near her son.” At age 4, Shiva felt the first pain of oppression. He didn’t know he was any different than his friend. Since that moment, he wanted to understand “why?” This thread continued to run through his schooling in the U.S., continuing at MIT, where he would earn four degrees, including his Ph.D., through today where Dr. Shiva is fueling a movement to effect change.

Beginning with his grandparents, Shiva was gifted by extraordinary examples. His great-grandfather Ganapathi, an indentured servant, escaped to Rangoon for a better life. Shiva’s grandfather and father were both born in  Burma, returning to India after WW II. In Burma, Ganapathi was taught by yogis how to enter trances and channel deities. There he had a dream telling him to return to India. He survived the incredible journey on foot back to India from Burma (now Myanmar).

His grandparents were indigenous tribal people who toiled many hours a day in the verdant rice paddies outside their village. They had no electricity, no running water, but every house had a Moringa Tree – the Tree of Life – known for its anti-aging properties.

On weekends, his grandmother was the village healer. She practiced Siddha, India’s oldest system of traditional medicine, preceding Ayurveda. This was Shiva’s first introduction to medicine, and it inspired his second “why?” “Why was she able to heal people when she had no formal degrees?”

Shiva’s parents also modeled extraordinary examples. That they even met was an amazing feat – two Untouchables who defied so many odds.

After his mother’s father left her family when she was 8, she was determined to become independent. Through sheer grit and hard work, she side-stepped the confines of the caste system she was born into – especially as a woman – earning a graduate mathematics degree.  And became head of the mathematics department in Bombay. (There is a photo of his mother, the only woman, alongside 20 men in turbans, when receiving her degree.)

His father didn’t see a book until he was 12, but met an amazing teacher who saw his great potential and taught him English and math under a mango tree with only a chalkboard. His father went on to become a chemical engineer and was later the right-hand man of a famous Indian industrialist.

Shiva’s father so impressed his boss and mentor that he was asked to transfer to the U.S. for training at Unilever. Shiva and his family moved to New Jersey in 1970 when Shiva was 7 to the working-class town of Patterson and later Clifton.

An important turning point occurred in Shiva’s life on a return trip to India 5 years later to visit a sick relative. At the train station as he departed, Shiva, now 12, was deeply moved to see his grandparents crying. Determined and inspired, he vowed to work hard for these good people – his aunts and uncles who lived in huts, his grandparents whose pure love he felt like never before, and for the working class people he lived alongside in New Jersey, since resettling in America – all oppressed by the political elite.

1 thought on “Who is Dr. Shiva Ayyadurai?”