Department of Children & Families (DCF) Victim,  Now Advocate Fighting for Her Child and Others  – PART 2

I am sad to say as I write this story, my sweet son, William Biserni, has not been home with his loving mom and family since October 24, 2014. That is over 860 days my child has not seen the people and the home he loves and grew up in. 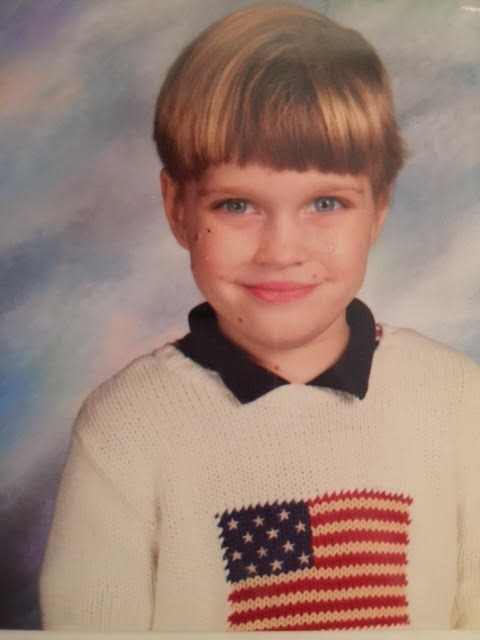 Our happy life as we knew it ended on the day of the violent removal of my innocent 12-year-old son by a mob of DCF social workers and the Brookfield, Conn. police with a falsified search and seizure that was based on fraud and false claims made by William’s father, who a few years earlier had told the courts he did “not want to pay for a child he did not want.” They violently kidnapped my 12-year-old child and took him from his home in handcuffs as he played video games on a Friday afternoon with his best friend. The police also twisted my shoulder to the point that I needed surgery.

The father claimed that I wasn’t returning William to him for visitation when, in fact, he wasn’t coming to get him. He really had little or no contact with William in the early years of his life, which was fine with me, but the state came in and demanded child support and visitation. Otherwise, William would still be safe at home with me.

DCF Connecticut took this deadbeat father’s claims at face value. He also alleged William needed Ritalin and wasn’t getting it in my care, despite Conn. state law saying that DCF cannot take a child solely on the basis of a parent refusing to drug their child. In reality, outside of the damage caused by DCF, William functions fine mentally and never should have been put on any psychotropic drug.

For the last 2 ½ years William has been removed from his mother for no reason other than false allegations made by the father, who now wants his parental rights terminated so that he will have no responsibility for his son. There is also the false psychological report by DCF-contracted psychologist David Mantell of New Britain, whose claim to infamy includes a 1970 study in Munich, Germany wherein he mentally tormented human research subjects in a study that was attempting to see how badly people were willing to harm others with electric shocks when ordered in the study to do so (the victims weren’t actually shocked, but the research subjects thought they were severely torturing other humans). Now Mantell just torments children and parents under DCF Conn. contract. 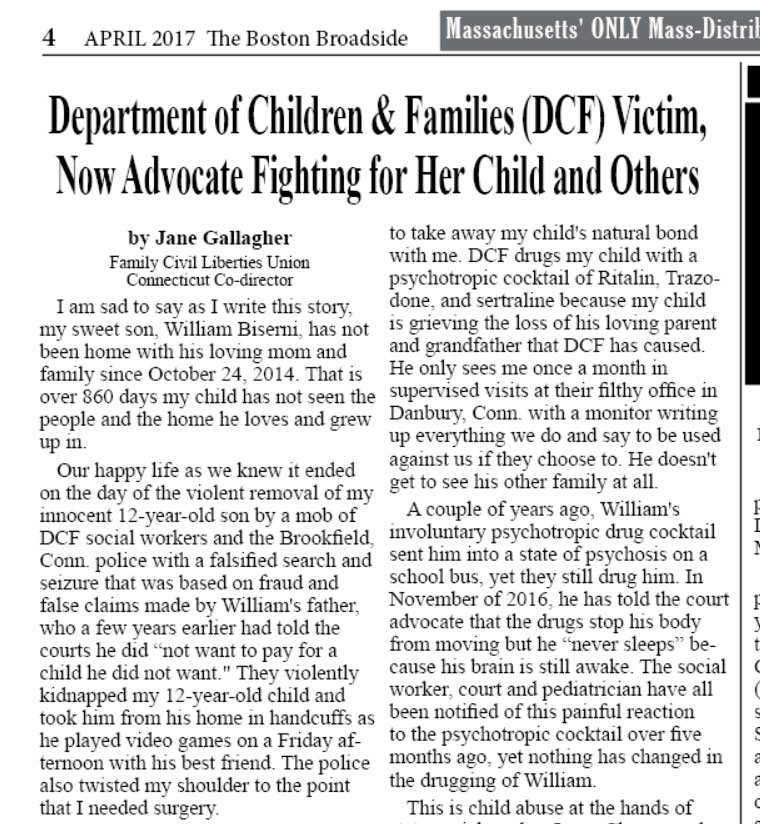 For over two years, DCF has worked to try and “separate” mother and child to take away my child’s natural bond with me. DCF drugs my child with a psychotropic cocktail of Ritalin, Trazodone, and sertraline because my child is grieving the loss of his loving parent and grandfather that DCF has caused. He only sees me once a month in supervised visits at their filthy office in Danbury, Conn. with a monitor writing up everything we do and say to be used against us if they choose to. He doesn’t get to see his other family at all. 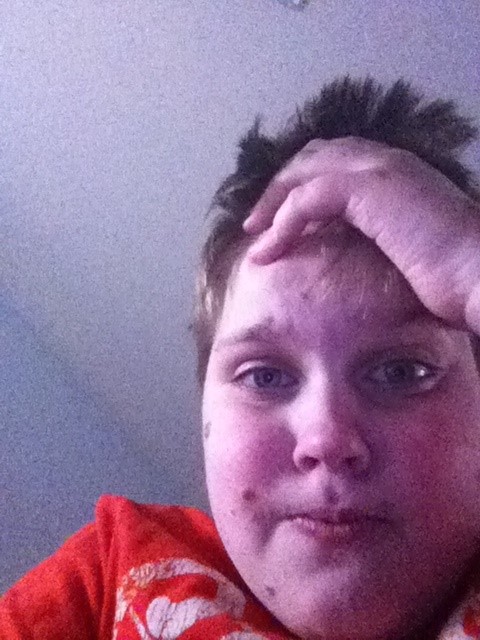 A couple of years ago, William’s involuntary psychotropic drug cocktail sent him into a state of psychosis on a school bus, yet they still drug him. In November of 2016, he has told the court advocate that the drugs stop his body from moving but he “never sleeps” because his brain is still awake. The social worker, court and pediatrician have all been notified of this painful reaction to the psychotropic cocktail over five months ago, yet nothing has changed in the drugging of William.

This is child abuse at the hands of state social worker Jason Chacon and a state vendor called Family and Children’s aide. In the meantime, APRNs like Esha Bhardwaj and psychiatrists such as Pieter Van Wattum of New Haven and Holly Seddon of Danbury have been happily billing the state while needlessly torturing my son with psychotropic drugs. When I try to fight back for my parental rights in the very lopsided family and probate court, I am often not even allowed to speak.

As a recently-named co-director of the Connecticut Family Civil Liberties Union, I plan to speak up for myself, my child and mostly, for the thousands of other families needlessly being destroyed by this out-of-control child protective services agency, their mental health vendors and their legal system of torment. As a start, I would like to urge all of you reading this to push your legislators to cut DCF power and money in this state and throughout the country. Children are not to be harmed for profit.