Appearing in Our Sept. 1 Printed Edition:

by Lonnie Brennan
There they go again. The damn liberals in the Massachusetts Democrat-infiltrated Republican Party have yet another GD carpetbagger on the ticket against congressional candidate Mark Alliegro.
Mark Alliegro is Massachusetts. Mark Alliegro is Cape Cod. The Falmouth resident has been running a courageous, thoughtful campaign against an extremist do-nothing liberal. And what happens? Another carpetbagger magically shows up.
Last election, it was a Mr. Chapman, who lived in Newton and changed his residency to Chatham to run – while his wife and family remained in their Newton home. This time, it’s a Mr. O’Malley, a bright-sounding Florida retiree, with his home in Tampa and a wife who owns a home in Marshfield. On December 21, 2015, O’Malley, who did grow up in South Boston, plopped down in Marshfield and registered to vote. On Dec. 24th he took out papers to act as the spoiler against Mark Alliegro.
According to the Hillsborough County (Fla.) Assessors’ records, he owns the home at 7621 Nathan’s Drive in Tampa, from which, according to FEC filings, his wife resides and loaned his campaign $2,000. His Facebook posting changed from Tampa to Marshfield, almost immediately after he pulled papers to run. 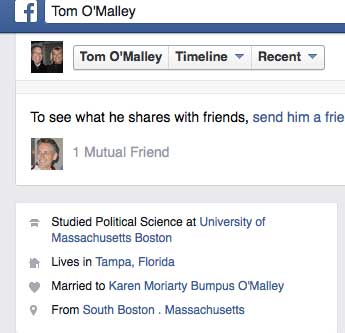 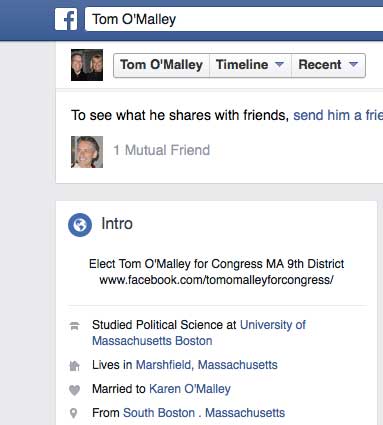 As an aside, O’Malley’s campaign website has been a treasure-trove of shifting views as well as a disturbing posting that caught the eye of many: a posted testimonial by one of his old Navy buddies urging friends to send cash in envelopes with no return address to the O’Malley campaign. That posting was finally edited to remove the illegal donation scheme. But not until after many saw the original (which we’ll post online).

If it’s not carpetbaggers, then it’s infiltration of the MassGOP local committees with stealth (and sometimes too stupid to be stealthy) Democrats.
The funniest thing in this election has been how O’Malley’s web site had, for six months, urged folks to vote for him in the Republican Primary on Sept. 20th. A mistake recently corrected: the correct date is Sept. 8th.
Perhaps it’s best. We don’t need carpetbaggers. Alliegro is solid. Alliegro is Massachusetts. Alliegro is Cape Cod.
Vote for Alliegro on Sept. 8th. O’Malley supporters: vote O’Malley on Sept. 20th (when the polls are closed). ♦ 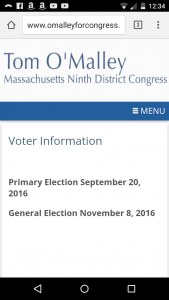 On April 19th, when Target announced its new transgender bathroom policy, the company’s stock was trading at $83.98 on a volume of 3.4 million shares exchanged. Fast forward to May Read More…

One Reply to “Another Carpetbagger On the Ballot Against Alliegro”