MARLBOROUGH – Last year was a very, very good year for Democrat State Rep. Danielle Gregorie, who represents the 4th Middlesex (certain precincts in Marlborough, Northborough, and Westborough). How good? The pol spent more than $21,500 of so-called “campaign funds” living the good life, from attending “women’s conventions” in Las Vegas and D.C., to multiple dinners at Ruth’s Chris Steak House and frequent visits to Emmet’s Pub across from the State House. 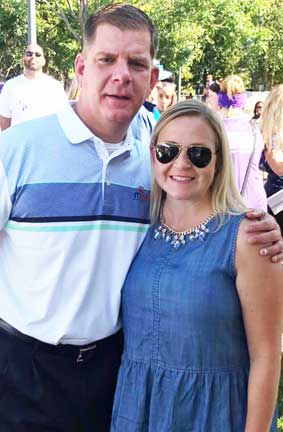 This rep enjoys her travels, hotel stays, and picking up the tab at lunch and dinner on a frequent basis, but why not? It’s all play money, and apparently almost all garnered from lobbyists, political action committees, politicians, and “consultants.” Indeed, of the $8,207 in campaign funds the Democrat raked in in 2017, only $100 was attributed to an in-district donor (Mary Ayakian of 27 Oakcrest Ave., Marlborough, Mass.). The bulk of the remainder is attributed to lobbyists, consultants, and political action committees from Abington, Boston, Brookline, Cohasset, Dorchester, Framingham, Florence, Norwell, Quincy, Scituate, Sudbury, Winchester, and Worcester. None in-district.

Yep, in just one year, 2017, Rep. Gregorie spent more money at restaurants, hotels, conventions, and custom “Women’s March Embroidery” than most citizens spend on their home mortgage, and more. A few examples of living the good life:

Aria Hotel, Las Vegas: April 26 – Women in Government MA Reception: $442.24 (also air fare to and from Las Vegas, hotel stay, food, etc., you get the idea. Delta Airlines got hundreds from the Rep.)

Bostonian, Boston: May 19 – Discussion with colleagues on climate change: $188.44

Those are just a few of the expenditures in 2017. Yes, we saw some office supply expenses, payments to campaign staff, flowers and such, but the bulk of expenditures went to eating large. Very large, and a few donations (for example, Jackie Smith Foundation, Marlborough: April 24 – Donation $100.00).

Gregoire was elected in 2008, having previously served as the aide to the former denizen of that office.

This guy says he’s a gal: In fact, his mommy, Massachusetts Congresswoman Katherine Clarke refers to tough-guy “Riley” as her daughter. He’s a dude. Attacks a police officer with a Read More…