Gov. Baker’s Appointee, Atty. Marsha Kazarosian, Moves in for the Kill
‘to Protect her $$$ Source’ 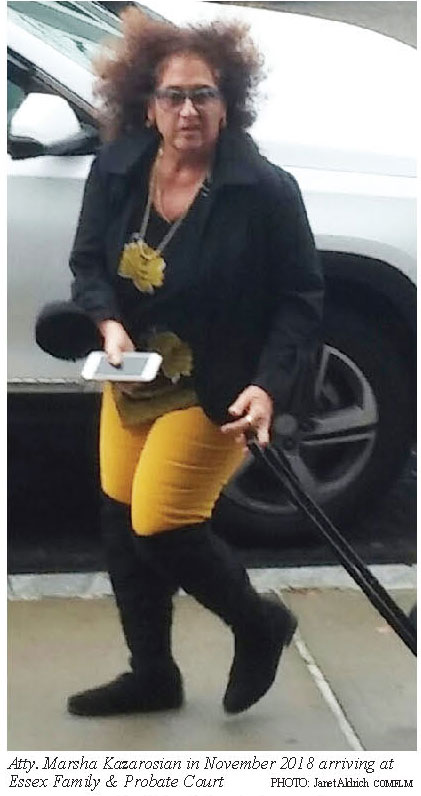 Retired Attorney Marvin Siegel of Boxford, Mass. thought he had everything all set: power of attorney, medical proxies, and all of the regular as well as the complex paperwork to ensure that his daughters would protect his future. That changed when he was involuntarily transported by elder services to Beverly Hospital approximately 7 years ago, then subsequently transported to a psychiatric unit where, according to his daughters, he was drugged against his will, and signed over control of his multi-million dollar estate to predatory lawyers.

Fast forward to 2018, and Mr. Siegel remains a “prisoner” in his own home, now saddled with some degree of dementia after years of forced drugging and isolation from immediate family members. According to two of his daughters, their father has been isolated, medicated, and his accounts continue to be liquidated, to the tune of nearly $250,000 per year in legal charges alone. They recently filed yet another objection in Essex County Probate and Family Court (Docket No. ES11P1465PM, and reference prior objections contained in ES11P1466GD).

The various documents submitted to the courts detail lawyers on a mad spending spree: invoices include charging from $275 to $600 per hour to talk to one another, photocopy papers, and respond to e-mails from one another.

The daughters specify in their objections that invoices include “excessive and frivolous” billing and reveal “duplicate and redundant efforts” as well as billing which they cite breaks rules of ethical behavior, charging $275 per hour for photocopying, for example.

But the daughters took on a giant, and payback is a bitch.

In their latest objections, the daughters detail excess charges for various services, as well as cite a certain lawyer whose near-doubling of the hourly rates for services threatens to rapidly accelerate the current nearly quarter-of-a-million dollar drain on their father’s accounts.

But the daughters poked a bear. A big bear. And that bear has struck back. Governor Charlie Baker’s appointee and member of the Massachusetts Board of Bar Overseers, Attorney Marsha Kazarosian of Haverhill, is one of the lawyers at the center of the “liquidation” of Mr. Siegel. Kazarosian has been paid lump sums “on retainer” repeatedly, multiple times each year, with little to no accounting of how she justifies her compensation, the sisters charge.

Despite hundreds of thousands of dollars in prior billings, Kazarosian received payments of :

according to recently released accountings.

Kazarosian struck back against one of the daughters, Attorney Lisa Siegel Belanger, seeking to strip Belanger of her license to practice law. Make no mistake, Kazarosian is a giant in political circles, having held many key positions and currently serving on the Massachusetts Board of Bar Overseers. Kazarosian also sits on a board recommending judgeships.

Belanger is charged with a long list of inappropriate behavior, behavior which included Belanger’s release and exposure of what she terms the systemic draining of her father estate. Kazarosian has gone several steps further by recently filing motions which have sought to isolate Belanger and her father Marvin even more.

Kazarosian had the courts prevent any public viewing, any recording, videotaping, and even went so far as apparently supporting the removal of Marvin’s son-in-law from a court hearing, so that only Lisa and her sister would be in the room. At that hearing, Lisa doubled-down on the presiding judge, revealing connections between the judge and opposing counsel which was previously undisclosed by the judge. After much delay that day, the judge consented to having Lisa immediately handwrite a motion to demand the judge withdraw from the proceedings, and recused herself from future interactions on the case. The judge complied. 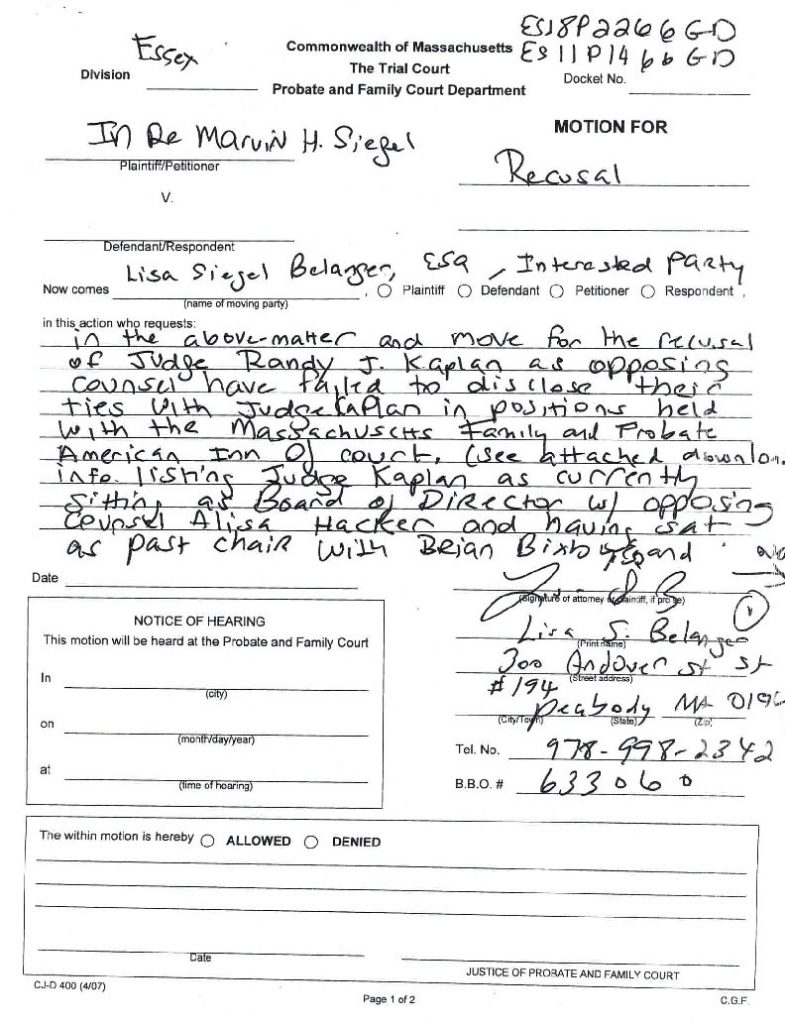 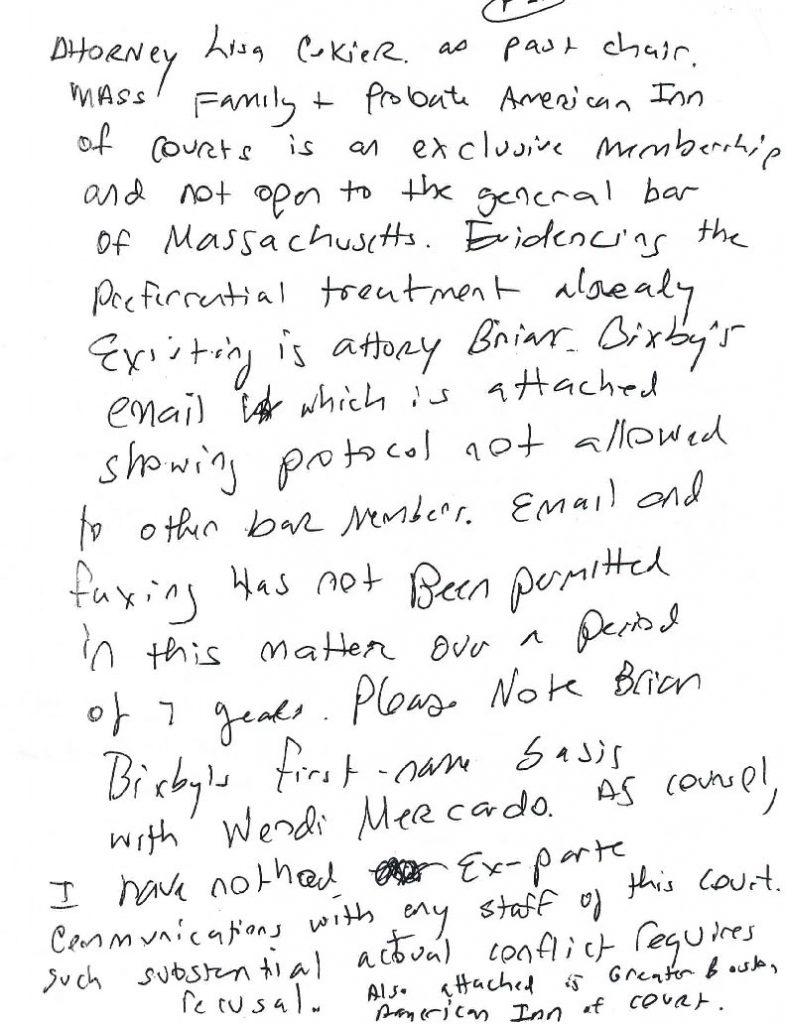 Handwritten motion filed with the court.  Judge had previously denied any conflict, but when pushed (by rush-jotting off of above motion which was then handed to court officials, the judge had no choice but to FESS-UP and withdraw). 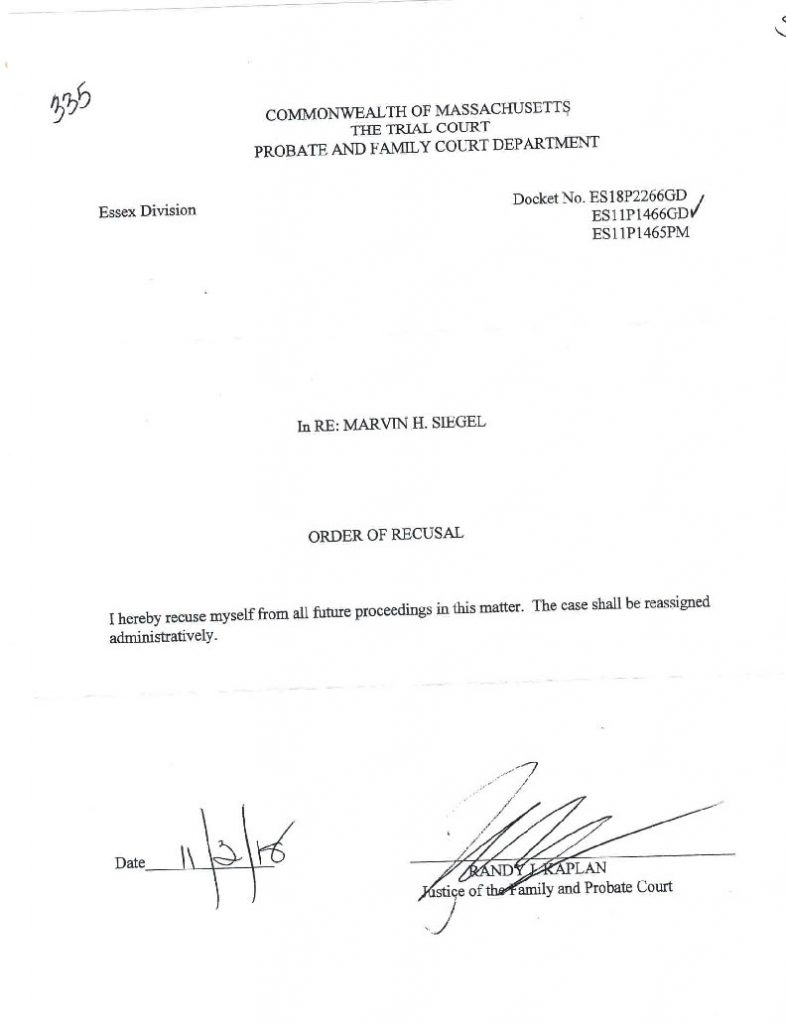 In addition to the monies drained each year by attorney Kazarosian, the latest court filings cite extensive payments to a number of lawyers over the years, including Brian Cuffe, James Feld, Deutsch Williams, Brian Bixby, Dennis McHugh, Alisa Hacker, Cheri Myette, and others. “ALL of these attorneys are paid from my father’s estate,” daughter Sheryl Sidman noted, adding that “he would be very upset to learn that his estate is being greatly reduced in size due to paying attorney fees.” 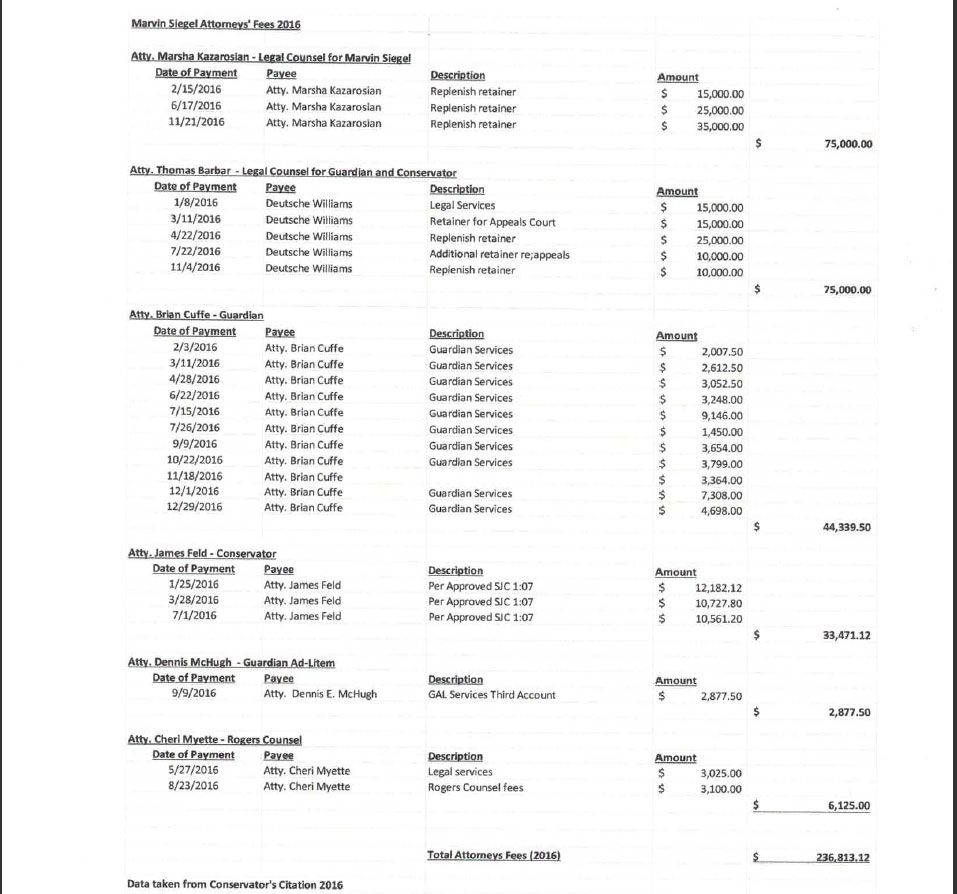 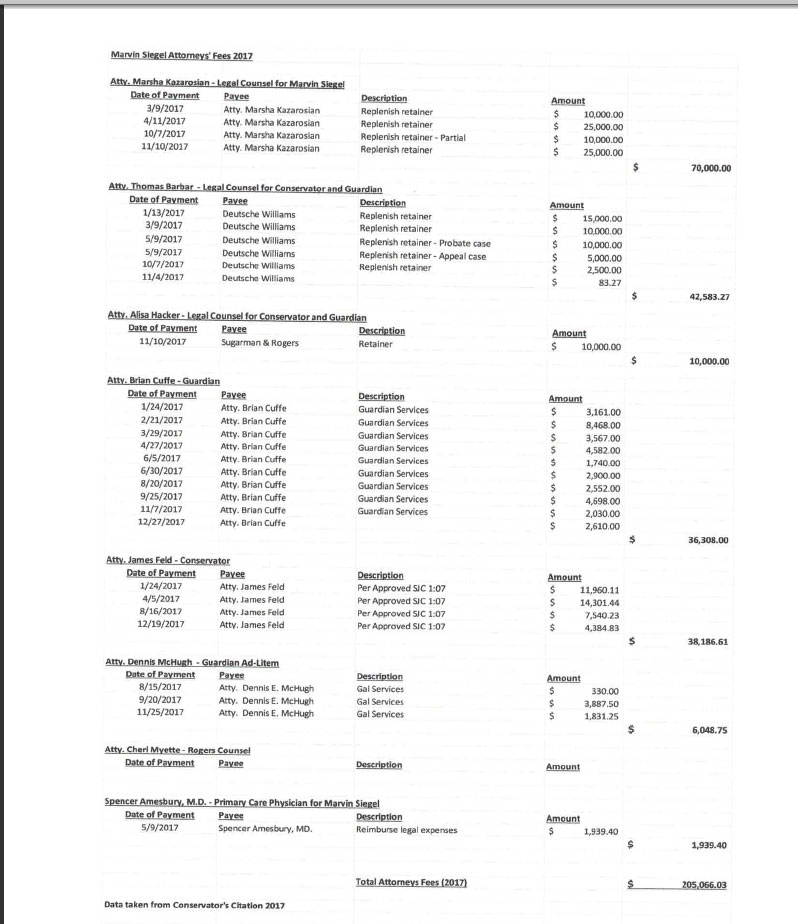 In 2016, 32% of all withdrawals were made to pay lawyer fees. In 2017, 31% of withdrawals went to lawyer fees. The daughters have also vehemently objected to the excessive withdrawal of funds for household items including charges to refurbish a bathroom, pay groceries, and more than $2,000 per week paid to Right At Home for 24/7 “guards” (aka medical babysitters) to stay with their father.

Mr. Siegel is in his 70s, and the grocery bills, while tiny compared to so many of the other charges, point out an area of financial interest. An example of funds paid to Right At Home for groceries for the senior include:

After nearly a year of work, Kazarosian has arranged a trial against Marvin Siegel’s daughter for early December. A three-day trial to strip the daughter of her license to practice law, citing how it was her who has been uncooperative in this matter and blasphemous in her objections to Kazarosian and the other lawyers involved.

UPDATE:
The daughters filed to have the proceedings videotaped.  Kazarosian objected and the courts sustained her.  Kazarosian in her objects slandered COMFLM founder Janet Aldridge, stating she had no press credentials. Ms. Aldridge re-filed with the court directly, including multiple press credentials from the Commonwealth of Massachusetts going back many, many, many years. She routinely videotapes hearings and events at the State House and has more credentials than imaginable. Either Kazarosian was stupid, or she blundered without checking.  The court has DELAYED the court case from Dec. 5th to early January, and has promised to render a decision on allowing the public access to any or some of the Siegel saga and his daughter’s trial… 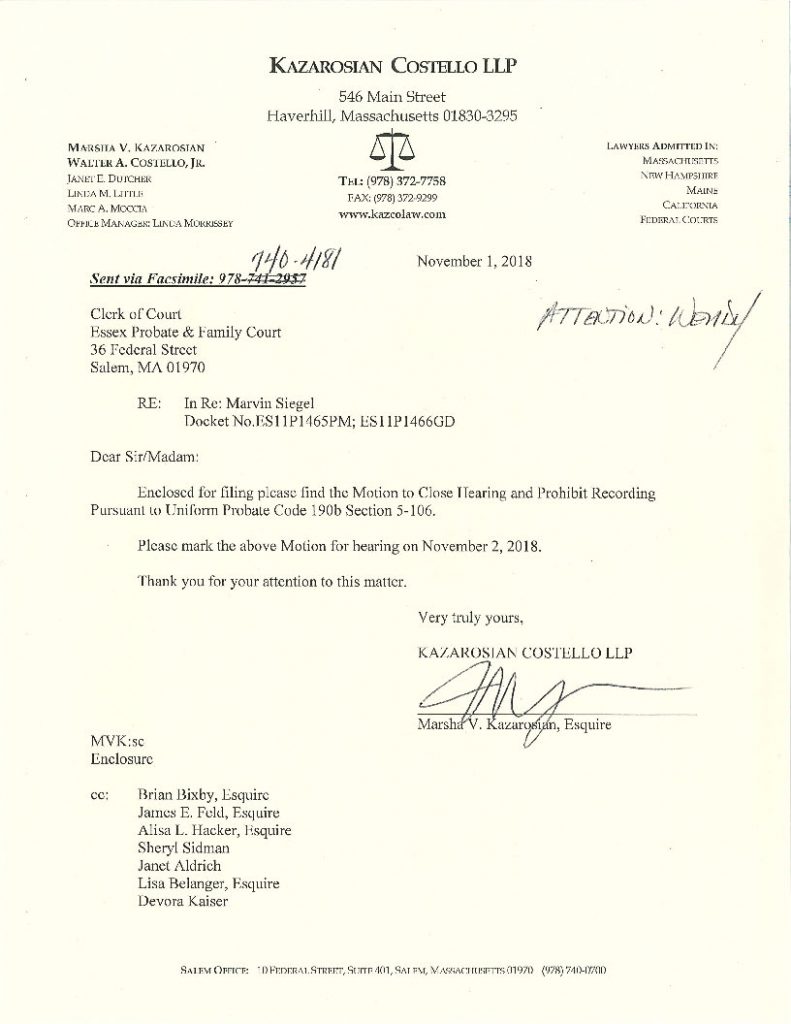 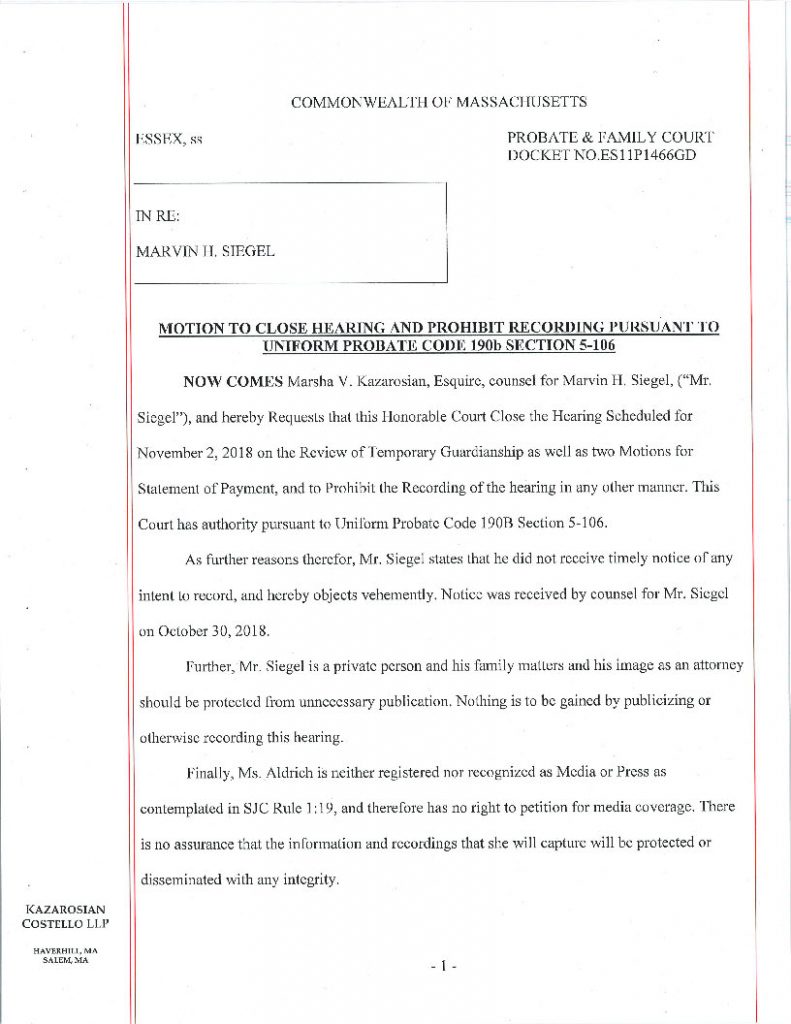 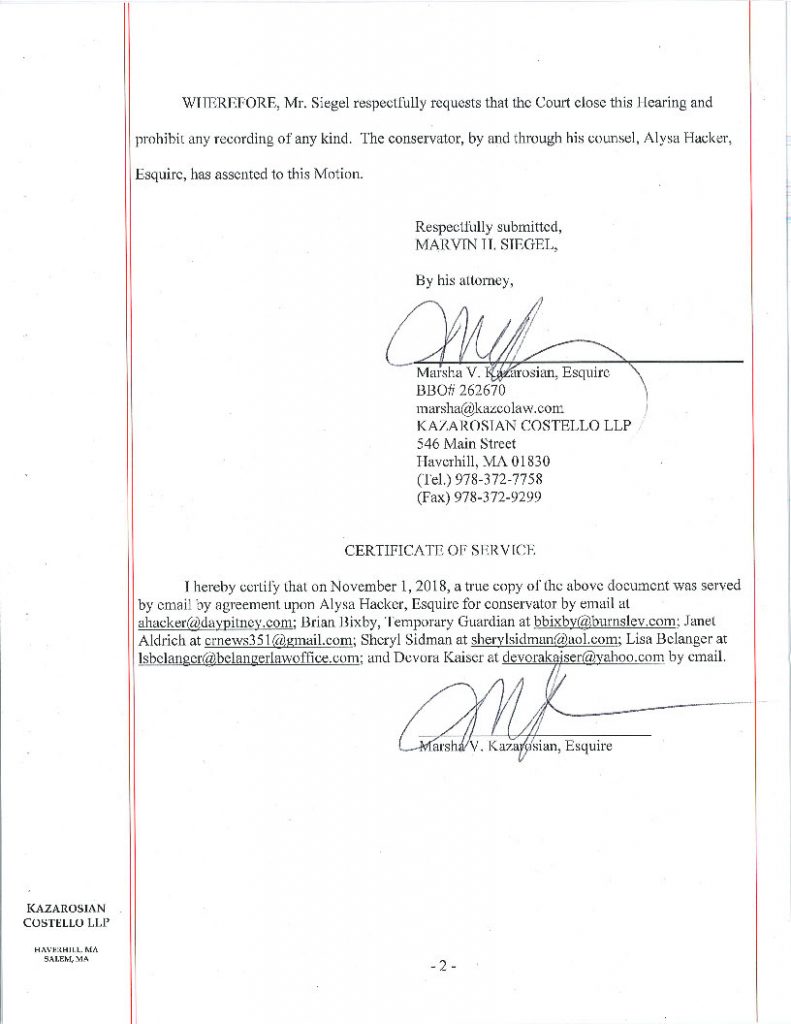 By Jeffrey T. Kuhner     Hillary Clinton claims Donald Trump is “temperamentally unfit” to be America’s commander-in-chief.   “This is not someone who should ever have the nuclear Read More…

8 Replies to “Gov. Baker’s Appointee, Atty. Marsha Kazarosian, Moves in for the Kill ‘to Protect her $$$ Source’”