BOSTON BROADSIDE ACTIVISM SECTION
A Chance to Fight Back

For over three decades, Taunton’s Bristol County Probate and Family Court has granted Canton’s Judge Rotenberg Center the power to torture the disabled.

Now is the time to use the new Boston Broadside Advocacy section to tell them to STOP.

As another contact possibility, Massachusetts judicial email addresses are:

first name.last name @jud.state.ma.us, so you can try reaching these and other judges in this manner.

The controversial Judge Rotenberg Center (JRC) in Canton, Mass. is the only facility in the nation that uses very powerful electric shocks as part of a treatment plan to change undesired behavior.

The United Nations has declared JRC’s shock as torture. Additionally, 231 organizations have sent petitions to the FDA to ban JRC’s shock and nearly 300,000 people have also signed petitions and sent them to the FDA to ban the shock treatments. Moreover, in 2011 the Massachusetts Department of Developmental Services (DDS) passed a state regulation to ban the shock and other torturous JRC actions like food deprivation, ammonia sprays, white-noise helmets and many more. If you Google search “judge rotenberg torture,” you will be amazed and outraged at the harm they cause our most vulnerable citizens. 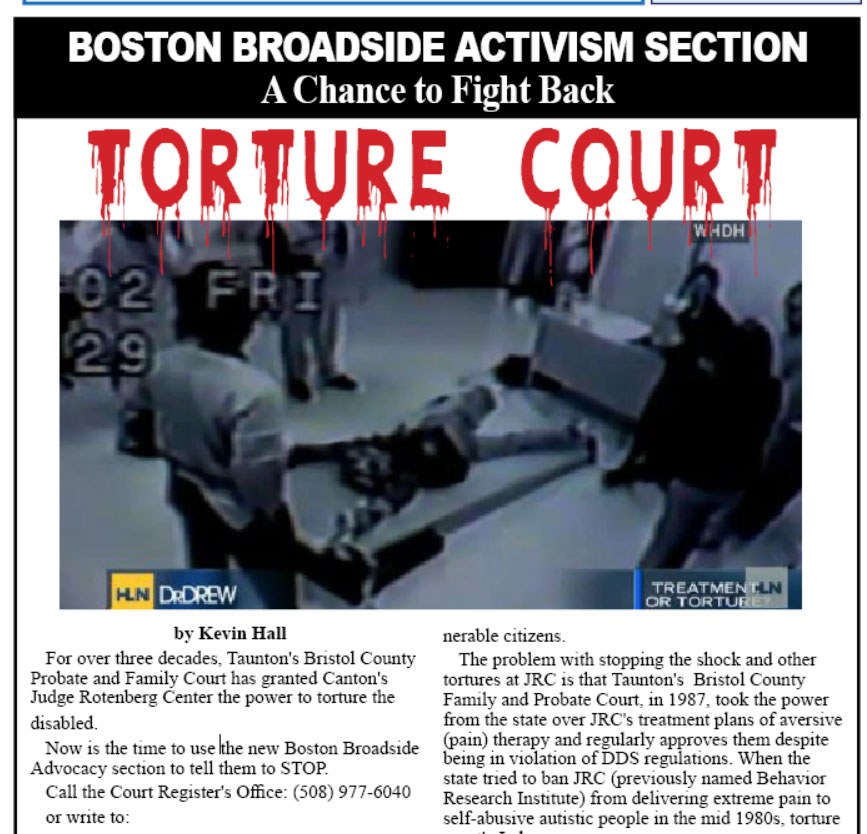 The problem with stopping the shock and other tortures at JRC is that Taunton’s  Bristol County Family and Probate Court, in 1987, took the power from the state over JRC’s treatment plans of aversive (pain) therapy and regularly approves them despite being in violation of DDS regulations. When the state tried to ban JRC (previously named Behavior Research Institute) from delivering extreme pain to self-abusive autistic people in the mid 1980s, torture court’s Judge Ernest Rotenberg  took power from the state and torture court judges have been quietly in the background approving all of JRC’s painful “treatment” plans ever since. Around the early ’90s, JRC upped the torture by obtaining FDA-approval for a couple of shock devices. Without FDA-approval, JRC has since greatly increased the shock device power. JRC also powerfully shocks the juvenile delinquent population. When the state recently tried to take regulatory power back over JRC, torture court First Justice Katherine Field decided to throw out the case to maintain power over the state. At last check, Judge Susan Jacobs is the torture court judge approving their painful treatment plans. Take action now so that these judges know they are being looked at for contributing to this abuse.

Information in this advocacy section was put together by Kevin Hall, New England Director of Citizens Commission on Human Rights.

*The weekly message is available via the Office of the Governor website https://www.maine.gov/governor/lepage/newsroom/weekly-address.html. Radio Address: One of the most reliable groups of voters are our senior citizens. Their life experience Read More…