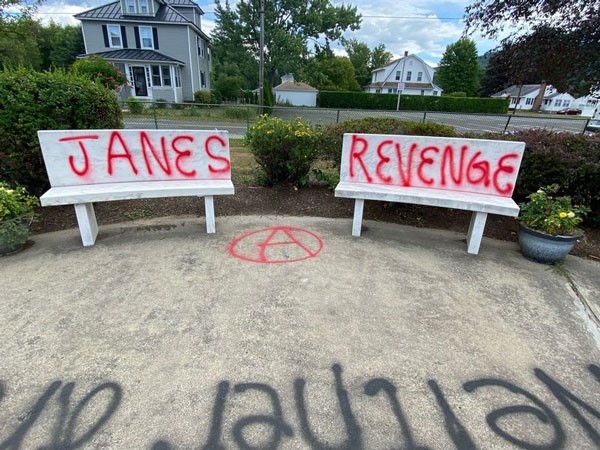 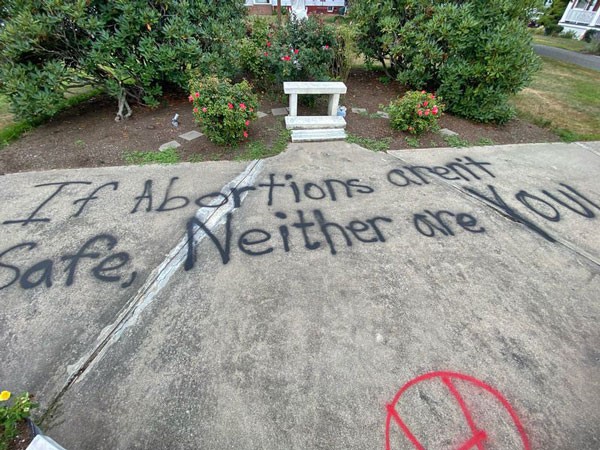 The League is calling for a hate crime investigation by the Easthampton Police and Northwestern District Attorney David E. Sullivan.

During the overnight hours of August 17-18th, Bethlehem House—a crisis pregnancy center affiliated with the Diocese of Springfield—was targeted by abortion fanatics from the violent extremist group, Jane’s Revenge.

The building, the former rectory of Sacred Heart Church, was splattered with red paint. The front walkway, two stone benches and signs on the property were defaced with graffiti.

The threatening message “If abortions aren’t safe, then neither are you!” was spray painted on the walkway. “Jane’s Revenge” and anarchist circles were painted on the benches, signs and walkway.

The pro-life ministry also offers free pregnancy resources such as referrals for employment, education and health care services. The Bethlehem House assists families until the baby is 18 months old.

This incident was the fourth act of vandalism directed against a crisis pregnancy center in Massachusetts since the leak of the majority opinion in the Dobbs case on May 2nd, and the sixth attack upon a Catholic institution in the Commonwealth in 2022.

Nationwide, an estimated 65 pro-life pregnancy centers, and 70 Catholic churches have been targeted by pro-abortion violence since May.

In a July 12th press conference in Boston, U.S. Senator Elizabeth Warren (D-MA) told reporters that crisis pregnancy centers “fool” and “torture” women and said “We need to shut them down here in Massachusetts and we need to shut them down all around the country.” She went on to claim that the volunteers at crisis centers actually mean women harm.

The attack on Bethlehem House comes just a month after Easthampton City Councilor Owen Zaret introduced an ordinance to fine crisis pregnancy centers for imparting information “by statement or omission” that the City would find to be “deceptive.”

The Catholic Action League called the attack “an obvious hate crime and a non-lethal incident of domestic terrorism intended not only to inflict property damage, but to intimidate law abiding citizens engaged in the peaceful exercise of their constitutional rights.”

“Extremists, incited, perhaps, by demagogues, are perpetrating acts of physical violence against them. Elected officials, who ought to know better, are making reckless and unfounded charges against them in what appears to be a politically motivated campaign of deliberate demonization.”

“Some of those same officials are selectively targeting these pro-life groups with hostile legislation intended to suppress them. Elizabeth Warren’s proposal to empower the Federal Trade Commission to investigate them would bankrupt crisis pregnancy centers through litigation engendered by civil enforcement proceedings.”

“The ordinance under consideration by the City of Worcester would force the immediate closure of the two long serving pregnancy centers in that city by compelling them to make abortion referrals.”

“The culpability of Elizabeth Warren and Maura Healey for this continuing violence cannot be lightly discounted. They resort to incendiary language to hurl dubious accusations, without credible evidence, against charitable organizations with no verifiable history of professional misconduct.”

“It would seem that the Democratic Left in Massachusetts has reached its Jacobin stage, where violence is not only tolerated, but leaders scramble to catch up with the most radicalized elements of their own political following.”

Do Not Lose Your Soul – Thousands to Descent Upon Calif. Legislators to Oppose Infanticide Bill

When the Democrats tacked the infanticide (ROE ACT) amendment onto the fiscal budget – no debate – just a push to kill babies at birth, among other expansions of ways Read More…

One Reply to “This incident was the fourth act of vandalism directed against a crisis pregnancy center in Massachusetts since the leak of the majority opinion in the Dobbs case on May 2nd, and the sixth attack upon a Catholic institution in the Commonwealth in 2022.”