Recently I shared with you the federal election record in Massachusetts during the 34-year tenure of Republican National Committeeman Ron Kaufman. Today I write to you to update you on Ron Kaufman’s activity and his role in creating the existing divisions apparent within the Massachusetts Republican Party.

Over the last several years, Ron Kaufman worked with others in an effort not just to destroy my reputation, but unlawfully interfere with the operations of the MassGOP.

Evidence in my possession indicates Ron Kaufman’s own aide was one of the lead henchmen in a scheme hatched more than two years ago.

An individual named Doug Bennett has said on multiple occasions that he worked as an employee of Ron Kaufman’s.

From November 2020 thru February 2022, Doug Bennett was one of the chief perpetrators of a campaign apparently led by Kaufman involving Facebook posts, direct mail pieces, email blasts, and newspaper stories that all served as part of an effort to remove me as party chairman.

The social media posts called me a pedophile, a racist, a bigot, and a criminal.

Meanwhile, news reports published by the Boston Globe and other local media outlets, in coordination with Bennett and others, sought to advance this damagingly false narrative.

Additionally, part of the campaign to remove me included shutting down bank accounts belonging to the party. This unlawful plan called for putting a post-no-debit hold on the MassGOP bank account, resulting in a bounced Feb. 1, 2022, rent payment for MassGOP headquarters and the shutdown of the party’s credit card.

Employee paychecks and health benefits were scheduled to be canceled.

These actions are in direct violation of Massachusetts criminal statutes.

In order to protect my reputation and the assets of MassGOP, two lawsuits have been filed to date.

Bennett has admitted under oath that he was paid by Red Massachusetts Grassroots Action LLC, an entity apparently managed by Brian Wynne, campaign manager for Gov. Charlie Baker.

Bennett led the efforts to defame and slander me. It is noteworthy that during Bennett’s testimony he admitted to signing a non-disclosure agreement with Red Massachusetts Grassroots Action LLC.

The MassGOP filed the second lawsuit against party treasurer Patrick Crowley, who authorized the post-no-debit to shut down the MassGOP bank accounts.

The discovery process for both lawsuits is ongoing. Evidence collected to date suggests that Ron Kaufman was aware and involved in this unlawful scheme.

As a follow up to this information I will be sharing with the 168 members of the Republican National Committee a narrative of the misuse of hundreds of thousands of dollars from the MassVictory federal account during the 2017/18 election cycle.

The 2017-18 election cycle saw several LLCs formed which received payments from the MassGOP MassVictory account. This money funded the lifestyles for politically-connected operatives.

The money was used for travel, entertainment, parking, rideshare costs, and fine dining.

The managers of these LLCs all share direct links to Gov. Charlie Baker.

If you would like to discuss this topic or any other issue concerning the events that have occurred over the last few years here in Massachusetts, please do not hesitate to reach out by phone or email.
Yours, 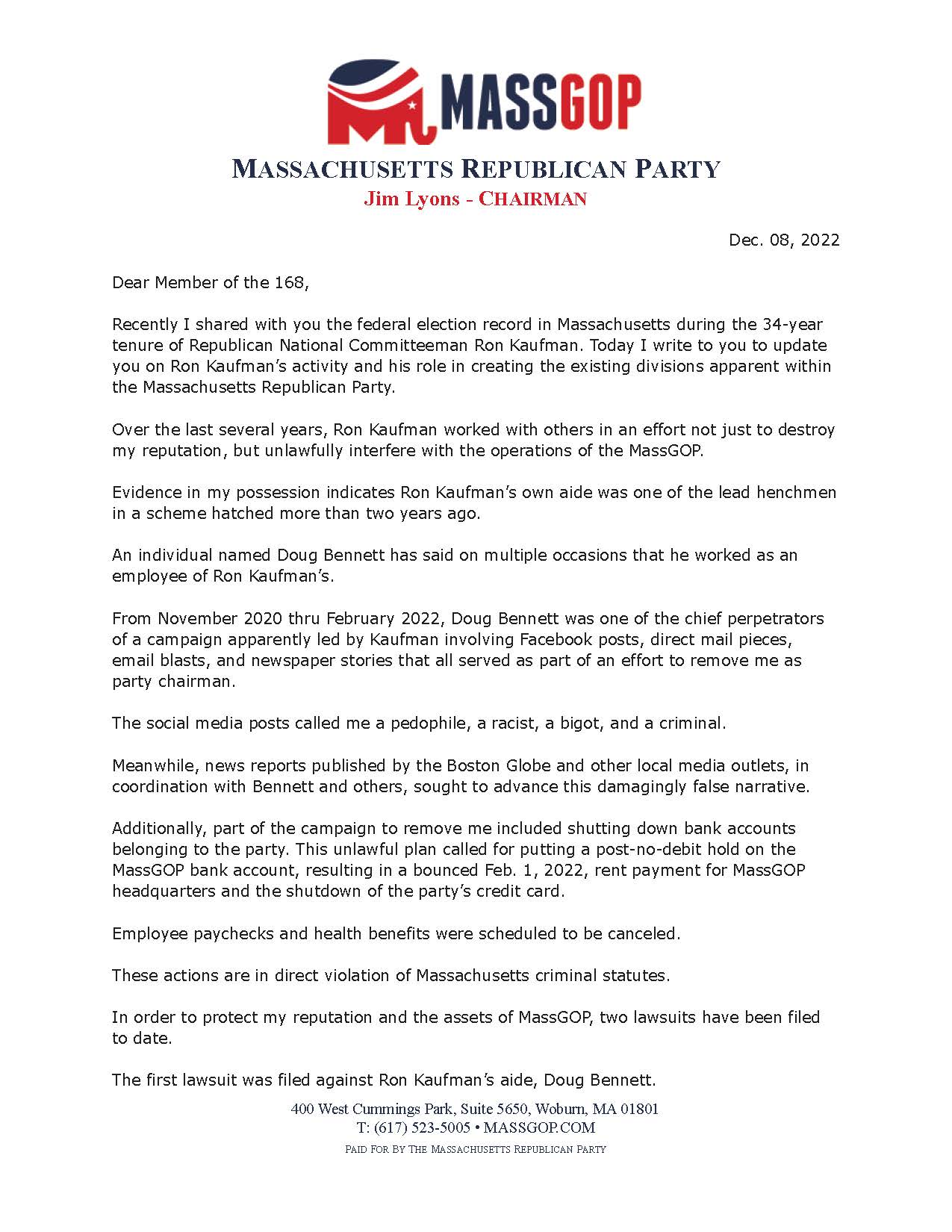 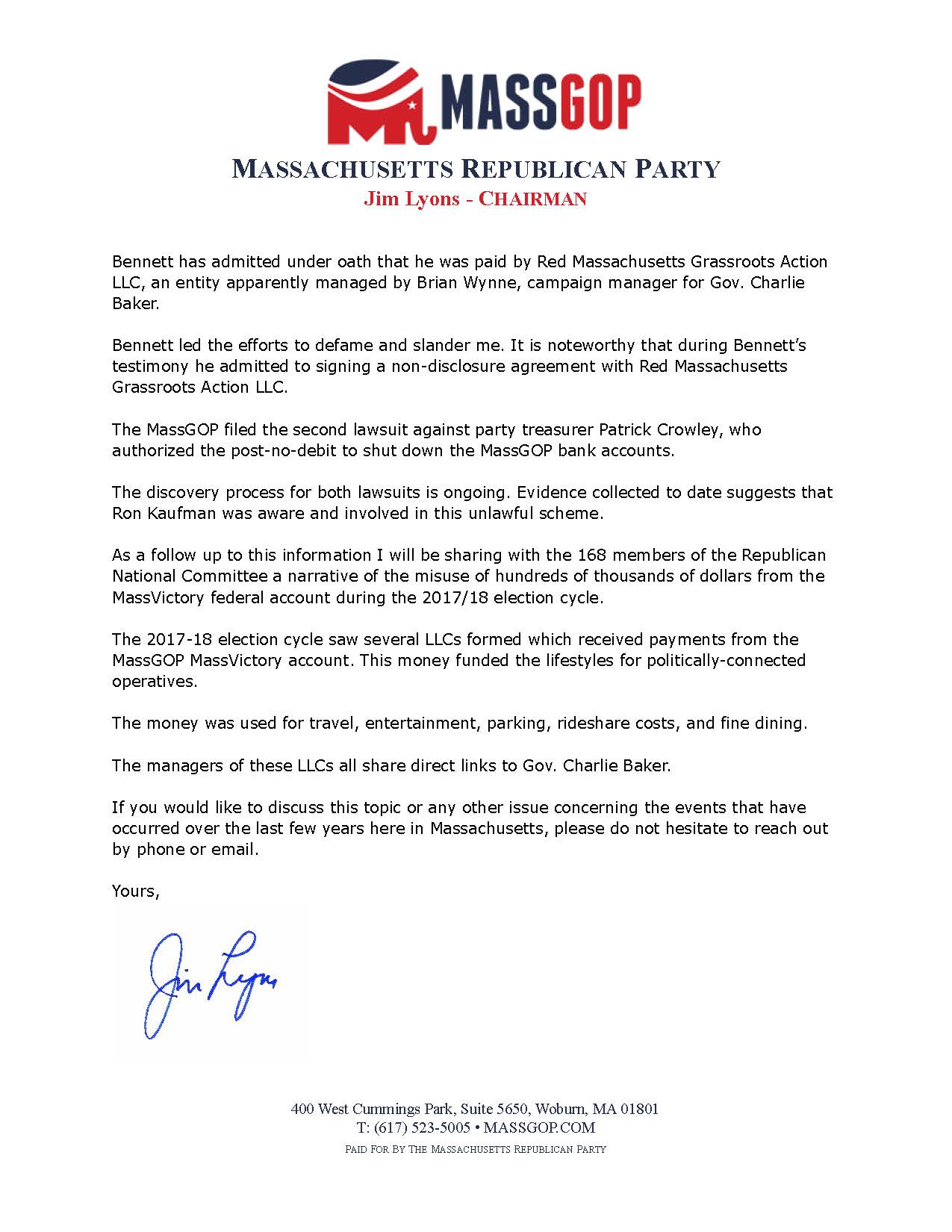