Press conference held outside Boston City Hall on deadline day to announce collection of 100,000 signatures in effort to guarantee voters will make final decision on whether illegal immigrants should be entitled with state-issued driver’s licenses.

BOSTON — Massachusetts Republican Party Chairman Jim Lyons appeared alongside volunteers and candidates outside City Hall on Wednesday to congratulate members of a grassroots campaign that managed to secure over 100,000 signatures in an effort to put the question of whether illegal immigrants should be entitled to driver’s licenses on the ballot

“What we’re seeing today is the culmination of an effort of volunteers across the state, what we’re seeing is democracy in action,” Lyons told reporters during the press conference. “They’ve spent the last eight weeks all over the state gathering over 100,000 signatures.”

Lyons also praised volunteers for accomplishing the feat despite an organized campaign to disrupt their efforts. 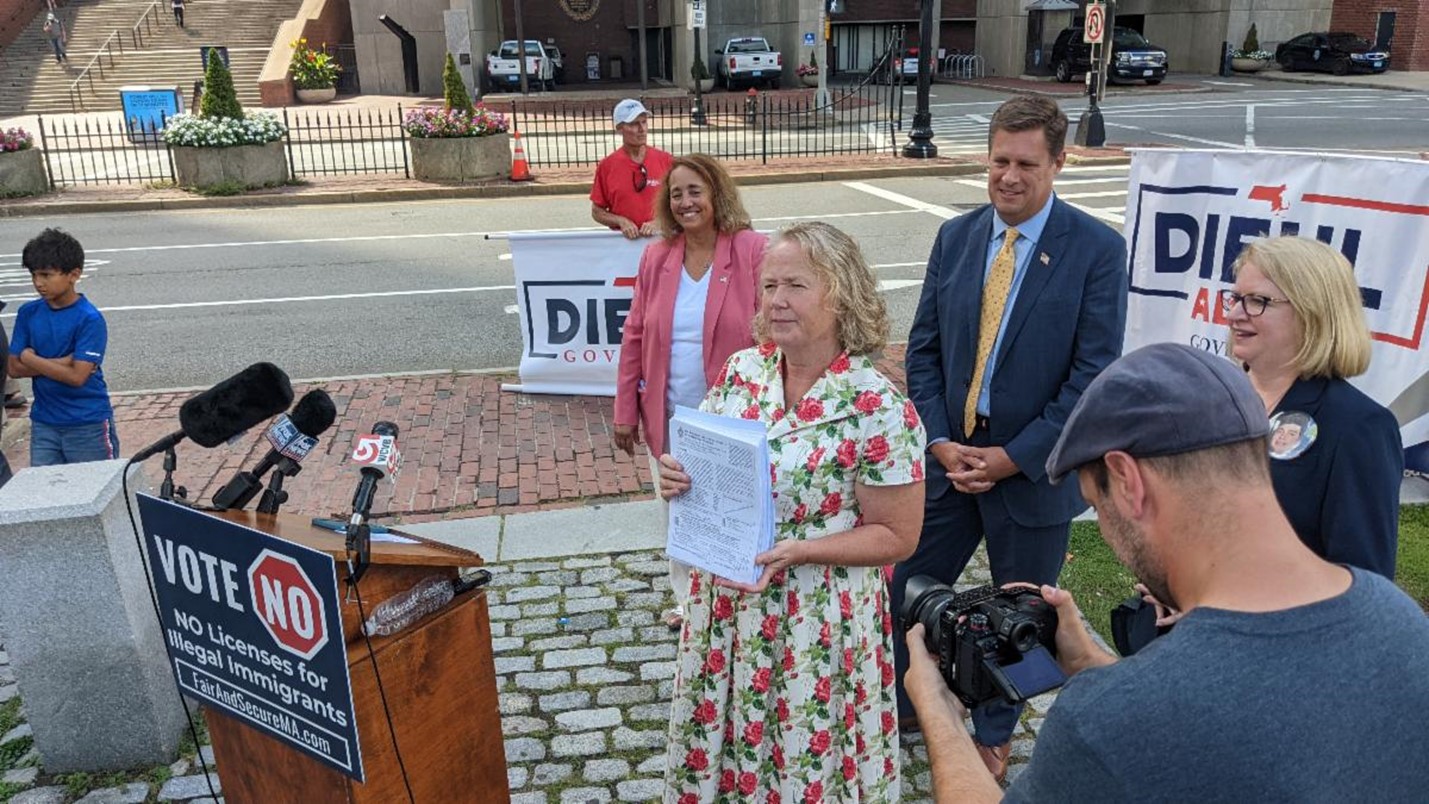 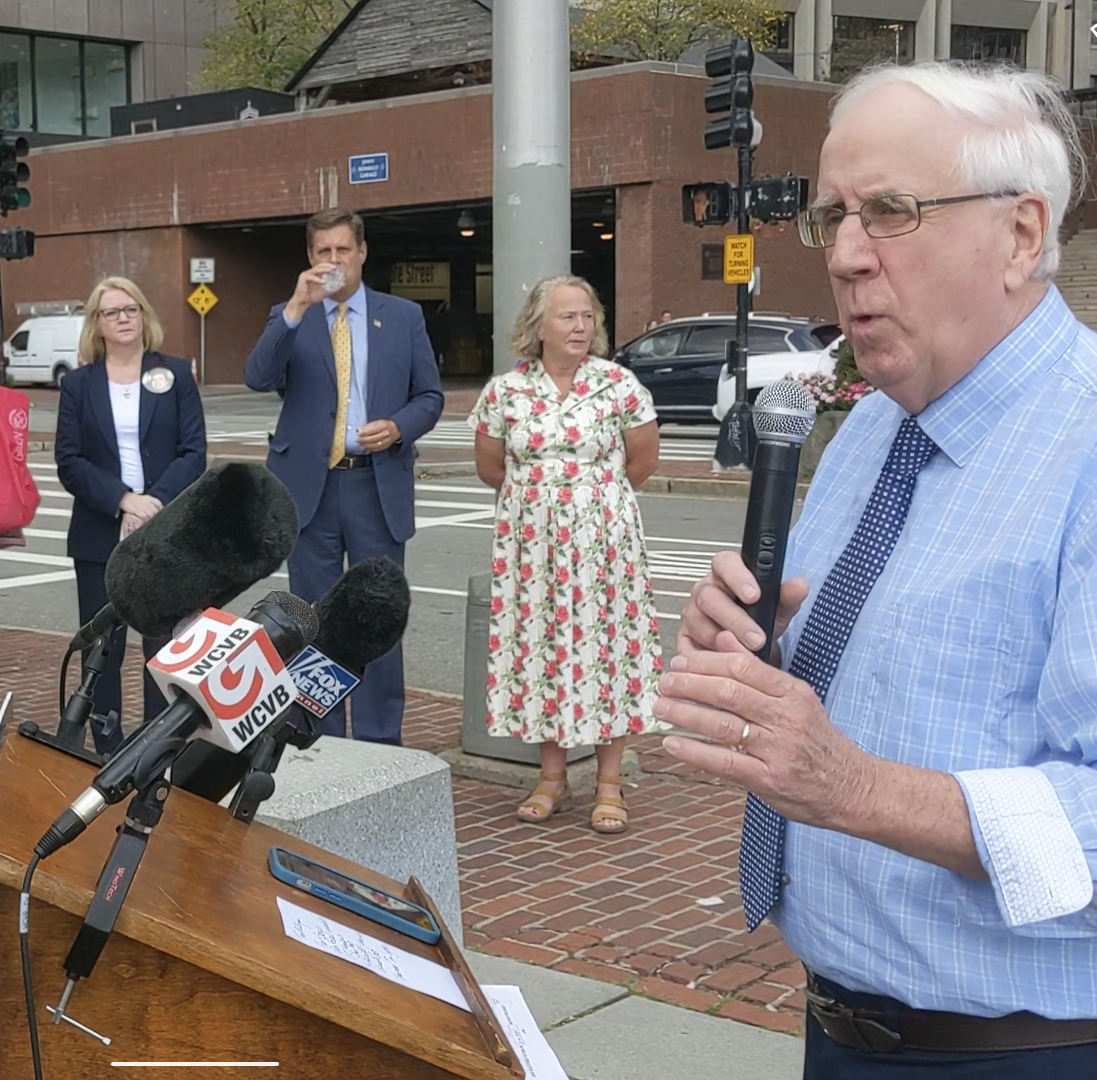 “What we saw the radical left do was organize from the beginning to interfere with our constitutional rights,” Lyons added, referencing state civil rights laws protecting signature collectors from harassment. “Just think about that — the lead law enforcement officer in the state, Attorney General Maura Healey — refused to protect the people out there collecting signatures.

Fair and Secure Massachusetts Chairwoman Maureen Maloney, whose son Matthew Denice was 23 when he was killed in 2011 by a drunk-driving illegal immigrant, called it an “honor” to help lead the effort. Maloney also singled out special praise to Republican gubernatorial candidate Geoff Diehl, whose volunteer team collected the highest totals, and who invited her to help lead the effort.

She disputed the Democrats’ narrative that the legislation makes state roads safer and pointed out that a 2020 law automatically registers those who obtain a Massachusetts driver’s license to vote.

“Voters lined up to sign our petition, they voiced to us their reasons for opposing the law,” Maloney recalled before adding that she witnessed firsthand the harassment campaign waged by leftists to prevent volunteers from carrying out their work.

“They intimidated voters, and often they caused enough of a disruption to prompt police to shut down our signature drives,” Maloney said. “These actions show how desperate Democrats are to keep voters from having their voices heard, and it was only through the dedication and efforts by all our volunteers that we will get this on the ballot in November.”

Wendy Wakeman, the lead organizer for the Fair and Secure Massachusetts campaign, hand-delivered a stack of completed signature sheets to the Boston Election Department following the press conference.

She noted that volunteers had only 59 days to clear the 41,000-signature threshold.

City and town clerks will continue certifying signatures through Friday, Sept. 2. Delivery of certified petitions to the Massachusetts Secretary of State’s office must be completed by 5 p.m. on Sept. 7.

The referendum question will be worded such that opponents of the new law will vote “no” in November. Check back in for future updates by visiting www.fairandsecurema.com.

EDITOR’S NOTE:
Republican candidate for governor Geoff Diehl spearheaded teams across the state to collect signatures. His opponent, who voted for Hillary Clinton against Donald J. Trump for president, businessman Chris Doughty did not appear to participate in any signature gathering efforts and apparently side-skirted this issue.

Update On: Critical Caucus Vote Saturday: Kathleen O’Connell for Republican State Committee vs. The Swamp and a Hillary Lover?

Update 2/25/2021: Slight update on the article below. Nancy Luther has thrown her liberal Baker-loving support to Jaclyn. You can read all about it on Jaclyn’s Facebook page posted mid-Thursday Read More…

2 Replies to “MassGOP Chairman Jim Lyons on final day of massive signature drive: “This was democracy in action.””