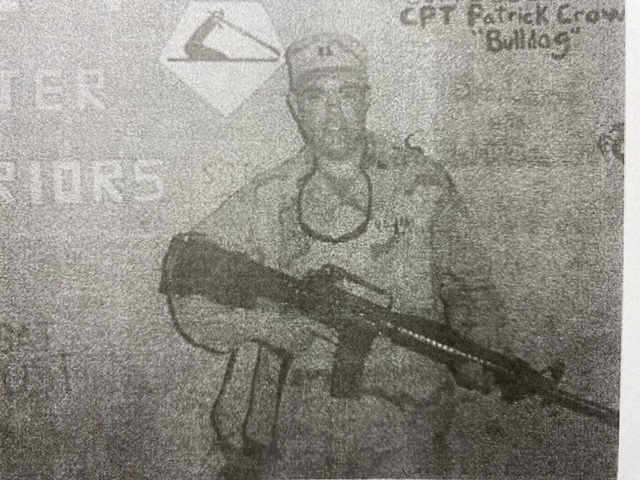 Just a coincidence, nothing to see here, move along is essentially what Crowley’s attorney had to say.  Crowley had been sparring with MassGOP Chairman Jim Lyons for many months when the photograph, shown below, showed up in Lyons’ e-mail one night. No message. Just the photo of Crowley holding the assault weapon.

Lyons attempted to secure a restraining order against Crowley, but was unsuccessful.  Crowley’s attorney argued in writing that it was just a mistake – that Crowley meant to send the photo to his son who wanted a photo his dad. The adult son resides with Crowley. How it just happened to be sent to Lyons – just a mistake the lawyer claimed.

Quick Recap:  Crowley is being sued by the MassGOP for his actions to disrupt and damage the party from within. According to MassGOP documents produced during the discovery phase of the lawsuit “Crowley testified at his deposition that he coordinated with others including state committee members, to boycott” a state committee meeting which resulted in a two-month delay in approving the annual budget. But, that’s not all that’s been uncovered. In addition to Crowley missing a year of meetings as well as the MassGOP Convention, Crowley worked with a “team” of individuals to disrupt or shut-down MassGOP operations, the MassGOP outlined in various exhibits.

For his part, Crowley asserted in certain e-mails that he had not abandoned his duties – that he was actively working, and that he would respond to e-mail, but not phone calls. Apparently, he sought to have written records of all communications, as he was in the spotlight for his actions (shutting off the bank account access, etc.), the MassGOP exhibits showcase.

Chairman Lyons has detailed the actions of Crowley and others, and has been conducting a series of meetings around the state showcasing some of the challenges brought upon the Republican Party in Massachusetts, from party insiders, who “have lined their own pockets” or taken other actions, with no regard to the MassGOP. Examples of how much funding now-former Mass. Gov. Charlie Baker’s infamous political action committee spent actively supported Democrats against Republican candidates was also discussed at tonight’s meeting. Lyons and former candidates also shared specifics of how party insiders sought to destroy non-Baker candidates.

As for Crowley’s role, Lyons detailed how Crowley had unilaterally placed a hold on all MassGOP funds at a critical time, and took other actions contrary to Mass. laws and common morals.  For his part, Crowley appeared at one of the meetings in Worcester in which he heckled Lyons, saying that what he did wasn’t illegal. Crowley got a bit of apparently unexpected blowback from certain audience members and “left with his tail between his legs” (one audience member related) when Lyons not only refused to back down, but laid it all out there – the actions of “the team,” including Crowley.

Check out our Home page for a schedule of upcoming meetings from Chairman Lyons.