Thank you very much Margot [Einstein] and to the CJUI Board of Directors for this award. While I believe that I was selected to receive the Emet Award for the purpose of making Bishop Stearns and Luis look even better…I sincerely appreciate the honor during this 15th year of CJUI presenting awards.

Unfortunately, some past recipients are no longer with us. Karen Weinstein, Bev & Ron Gerstenberger, Robert Lappin, and my father, Larry Grodman.

The current president and driving force of CJUI, Tricia Miller, must also be acknowledged for her tireless efforts for the sake of Zion. Thank you Tricia!

Deserving of recognition today, all the way from the Holy Land, are two women promoting and securing Eretz Yisrael. Sondra Baras, the founder of Christian Friends of Israeli Communities, based in Samaria and Romi Benyamini, representing the Yatar unit which assists the Border Police and IDF utilizing specialized all- terrain vehicles. Would both of you please stand and be recognized.

I salute each of these individuals as my achievements to benefit the State of Israel are the result of the inspiration, they, and others, have developed within me.

I would like to make special note of Margot Einstein who received her Genesis Award ten years ago. For Margot, as she begins her 99th year next summer, I would like to update the common phrase “May you live until 120,” which is a reference to Moses, to “May you live until 127,” which would then reference the biblical figure, Sarah. Margot, we all could use an extra seven years of your wisdom, determination, and humor.

By being in this audience today, you are defining yourself as a Zionist. One who actively supports the Jewish State of Israel. In Genesis 12:3 of the Torah portion Lech Lecha, which was read in synagogues around the world last Shabbat, G-d says to Abraham “I will bless those who bless you, and him who curses you – I will curse, and all the families of the earth shall bless themselves by you.” This promise has held true as our own United States of America has been blessed with prosperity and freedom by having, until very recently, a government with little anti-Semitism. The reverse also applies. The expulsion of Jews from Spain in 1492 caused the country to decline economically and culturally. Nazi Germany lost 7.5 million of its own population and then their country was divided for the next 44 years. And, the current crop of anti-Israel countries in the world is amongst the most primitive.

Still in Lech Lecha, Genesis 13:15, G-d says to Abraham “For all the land that you see, to you will I give it, and to your descendaents forever.” This creates the inextricable bond between Israel and the land, a bond powerful enough to defy thousands of years of exile. There is nothing analogous in the world to the Jews attachment to Israel. Nor is there anything similar to the return of Jews to the land of Israel after two thousand years of exile. For many Christians as well as Jews, it is the most obvious and dramatic example of a divine promise fulfilled.

While we in the United States may be experiencing a feeling of political and societal imminent danger, we must always remember that it takes courage to rebuild a shattered world. That was the courage shown by those who built and fought for the State of Israel in the years after the Holocaust. When it comes to rebuilding the ruins from a catastrophe, a populace must not wait for permission!

Christians and Jews have a shared heritage and, at times, similar customs. In fact, in Genesis 18:4 of yesterday’s Torah portion, Vayeira, Abraham washes the feet of three visiting angels, who have assumed human form. According to the New Testament, in John 13:5, Jesus, who was obviously a Jew, washes the feet of his disciples, before his final Passover Seder meal.

In this same Torah portion of Vayeira, G-d tells Abraham that He will be destroying Sodom due to the wickedness of all the inhabitants. Abraham requests that the city be saved if there are 50 righteous citizens. When G-d agrees…Abraham lowers the figure to 45, then 40, then 30, then 20, and finally 10, testing the flexibility of the Almighty. G-d acquiesces all the way down to ten righteous individuals. What is happening during this dialogue? G-d wants Abraham to be the first defense attorney on earth. To argue their case; to be the voice of the other side. And that is precisely what Abraham does. If G-d invites His own verdict to be challenged in this way, how much more so does He expect the verdict of a human court to be challenged? From the United Nations, to the International Criminal Court, to the Squad in Congress, to our local school boards – we must defend the democratic State of Israel through education and strong advocacy. 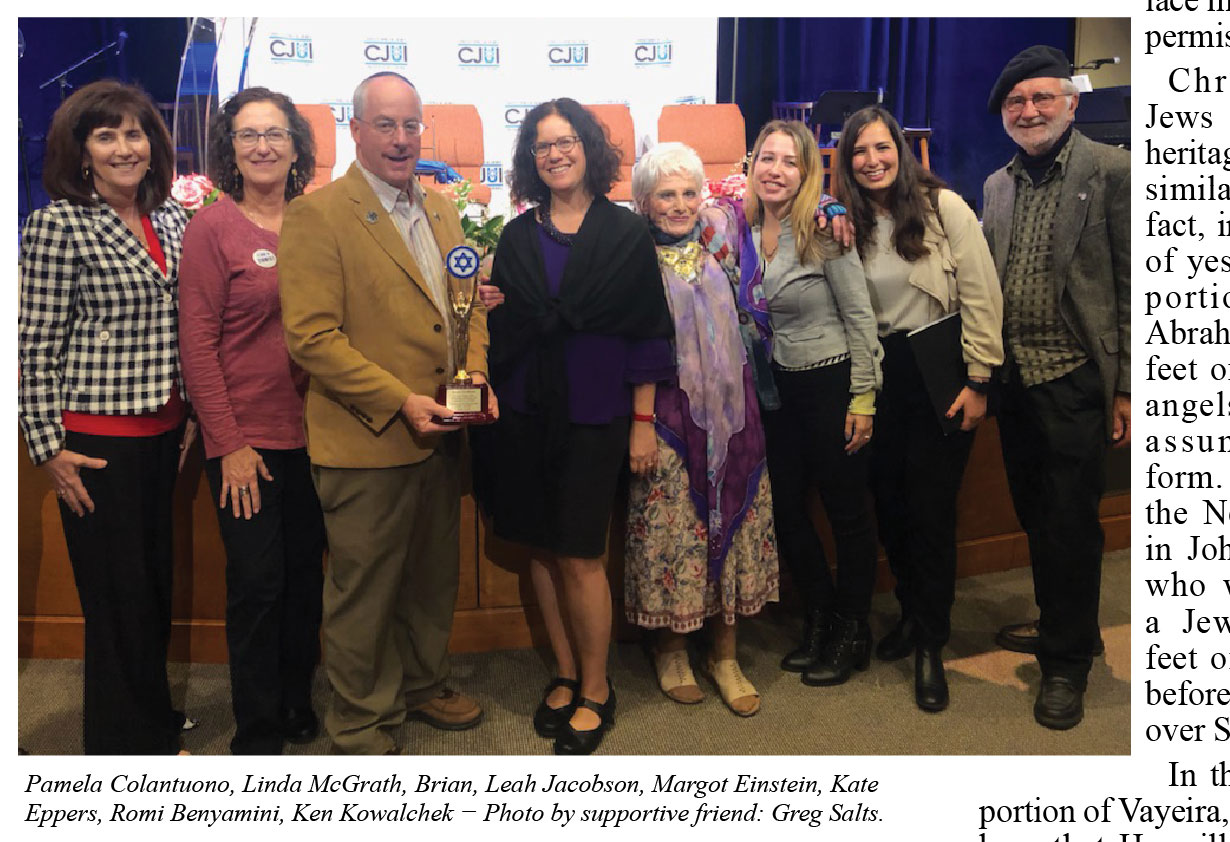 Judaism is a sustained discipline in not taking life for granted. We were the people born in slavery so that we would value freedom. We were the nation always small, so that we would know that strength does not lie in numbers but in the faith that begets courage. Our ancestors walked through the valley of the shadow of death, so that we could never forget the sanctity of life.

Abraham’s grandson, Jacob, was renamed Israel after his struggle with an angel. The Jewish people are called the people of Israel. The translation of this name is “one who has struggled with G-d, and with men and has overcome.” We must continue to struggle for justice and truth. This includes all of Jacob’s descendants, both Jews and Christians.

There are very significant issues of our day: from Ben & Jerry’s ending sales in Judea & Samaria (which is the pulsing heart of Israel), to Nike terminating all business in the Holy Land, to Massachusetts Senate Bill 365 which would likely increase anti-Semitism in our public schools, to university faculty (including our own University of Massachusetts) propagating hate of Jewish students and Israel, to half of U.S. Jewish college students hiding their religious identity. The dark list is long.

However, the recent past has been replete with accomplishments. Politically, we have the Abraham Accords which garnered treaties between Israel and the countries of Bahrain, the United Arab Emirates and Morocco. The U.S. decision to recognize Israel’s sovereignty over the strategic Golan Heights. Israeli sovereignty over Judea and Samaria and the Jordan Valley. And, moving the U.S. embassy from Tel Aviv to the eternal Jewish and Israeli capital of Yerushalayim.

Technologically, Israel, the Start Up Nation, has invented Waze to help us navigate, PillCam, a swallowable medical camera to assist surgeons, the original computer firewall from CheckPoint Software to prevent virus intrusions, ReWalk to allow paraplegics to walk, the original Instant Messenger which was called ICQ, and the first USB drive.

Israel is on the frontline of providing critical life-saving international aid. She has assisted approximately 150 countries from around the world…from Albania and Angola to Zambia and Zimbabwe. From saving earthquake victims in Haiti, to assisting 9/11 first responders in New York City, and most recently the rescue of vulnerable Afghanis.

Israel is the only country in the Middle East with a full-fledged democracy, free speech and religious tolerance. She has a free press and independent judiciary. While surrounded by hostile neighbors she continues to thrive while fighting terrorists and state actors. Every military action taken has been a defensive action. No country came to her aid in her 1948 fight for independence. In fewer than 75 years…Israel is one of the freest, most prosperous, most successful nations on earth.

After conquering Jerusalem in 1004 BCE, King David, the second king of the Israelites, declared the city as capital. His son, the wise King Solomon built a temple on Mount Moriah approximately 40 years later. The Babylonians captured Jerusalem in 586 BCE and destroyed it and the temple, after approximately 400 years of Jewish rule. This is called the First Temple Period. The Second Temple Period began about 520 BCE and lasted until 70 AD, 35 years after the death of Jesus. This equates to approximately 600 years. So, our young modern State of Israel, at 73 years old, is just beginning! May she endure from the Golan Heights in the north to Eilat in the south – from the Jordan River in the east to the Mediterranean Sea in the west.

I implore each person here today to redouble his or her efforts in defending Israel by educating and advocating on her behalf. This will have the additional effect of strengthening our own USA, and the bond between these two great nations.

Thank you very much. ♦

Halie Soifer of the Jewish Democratic Council of America, sought to dispel the notion that they were objecting to the substance, saying “the measure was manipulated using anti-Semitism for political Read More…

1 minute video Submitted by one of our readers to remind people: “The Muslims are at war with the Christians in the USA. The Christians don’t know it. This is Read More…