The first thing you notice when you walk into Andrea Taber’s Ever So Humble Pie Company is the flags and patriotic banners hanging from the ceiling. There are American flags, colonial flags, Minutemen flags, flags of each branch of the armed services and a black POW/MIA flag. Your immediate impression is “Wow!” what a great place to work or visit. The atmosphere just made you so proud to be an American.

On June 4, the Massachusetts Taxpayers Best Ally (MTBA), a new PAC organized by the group that defeated the automatic increase in the gasoline tax, held a “Bacon Hill Night of Crime” at the pie company with Howie Carr. Representative Geoff Diehl (R-Whitman) and Boston Herald columnist/campaign consultant Holly Robichaud were hosts for the event. 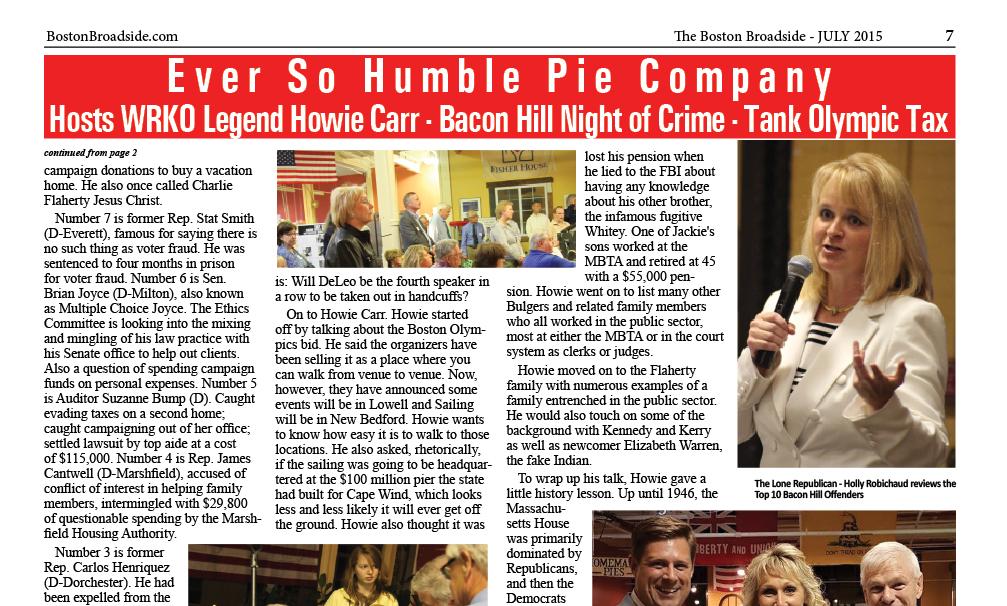 Diehl began the evening by showing off the prestigious Pollie Award. This is given each year by the American Association of Political Consultants, and for 2015 in the category of Ballot Measure Campaign of the Year, it was awarded to TanktheGasTax.org — Yes on 1 with Holly Robichaud, Steve Aylward and Geoff Diehl. Congratulations to them all!
Next up was Representative Shaunna O’Connell (R-Taunton) who talked about her efforts to reform the EBT card program. She reminded everybody on how the Patrick administration wanted to charge her an $800 fee to find out how many cards had inordinately high balances on them. So she went on the Howie Carr Show with her story and listeners chipped in the money so that she could get the information that should have been available to her for free.
Then Holly Robichaud took the stage to tell us about the Top Ten Bacon Hill Offenders for Taxpayer Abuse & Other Actions. Number 10 on her list is Rep. Garrett Bradley (D-Hingham), who as Whip led the fight to change the rules to allow Speaker DeLeo to remain “Speaker for Life.” Bradley lists his profession as “Legislator” and has assorted family members on the public payroll. Number 9 is the “Family Flaherty.” This not only includes former Speaker of the House Charlie Flaherty (D-Cambridge), who pleaded guilty to felony tax evasion and resigned in disgrace, but his son Timothy who is now under federal indictment. Number 8 is Rep. John Rogers (D-Norwood), also known as Honest John, who laundered campaign donations to buy a vacation home. He also once called Charlie Flaherty Jesus Christ.
Number 7 is former Rep. Stat Smith (D-Everett), famous for saying there is no such thing as voter fraud. He was sentenced to four months in prison for voter fraud. Number 6 is Sen. Brian Joyce (D-Milton), also known as Multiple Choice Joyce. The Ethics Committee is looking into the mixing and mingling of his law practice with his Senate office to help out clients. Also a question of spending campaign funds on personal expenses. Number 5 is Auditor Suzanne Bump (D). Caught evading taxes on a second home; caught campaigning out of her office; settled lawsuit by top aide at a cost of $115,000. Number 4 is Rep. James Cantwell (D-Marshfield), accused of conflict of interest in helping family members, intermingled with $29,800 of questionable spending by the Marshfield Housing Authority.
Number 3 is former Rep. Carlos Henriquez (D-Dorchester). He had been expelled from the House after being found guilty of two counts of assault against a female acquaintance and serving six month in jail. He is on the list because he wants to run for his old seat. Number 2 on the list is former Sen. Dianne Wilkerson (D-Boston), famous for being caught on camera taking bribes and stuffing money into her bra. She was sentenced to 3 1/2 years in prison. Out now, she wants to make a comeback for her old seat. First on the list at Number 1 is Speaker of the House Robert DeLeo. The federal prosecutor in the Probation Department job-rigging scandal has already called DeLeo an “unindicted co-conspirator.” And rumor has it that the Grand Jury is meeting again to explore more criminal wrong doing in this whole sordid affair. The question is: Will DeLeo be the fourth speaker in a row to be taken out in handcuffs?
On to Howie Carr. Howie started off by talking about the Boston Olympics bid. He said the organizers have been selling it as a place where you can walk from venue to venue. Now, however, they have announced some events will be in Lowell and Sailing will be in New Bedford. Howie wants to know how easy it is to walk to those locations. He also asked, rhetorically, if the sailing was going to be headquartered at the $100 million pier the state had built for Cape Wind, which looks less and less likely it will ever get off the ground. Howie also thought it was strange that Boston2024 had just hired Steve Pagliuca, one of the owners of the Celtics, to manage the Olympics effort. This because Pagliuca had spent $7.7 million in his quest to win the Democratic primary for Ted Kennedy’s old seat in 2009. He came in fourth out of four candidates. That’s not effective use of money spent.
Howie then moved into the connection of organized crime with politics. Of course, the first thing he mentioned was the Bulger family. Billy Bulger, former president of the Senate and former president of the University of Massachusetts, now collects a $200,000/yr pension from the taxpayers. His brother, Jackie, was a court clerk, but lost his pension when he lied to the FBI about having any knowledge about his other brother, the infamous fugitive Whitey. One of Jackie’s sons worked at the MBTA and retired at 45 with a $55,000 pension. Howie went on to list many other Bulgers and related family members who all worked in the public sector, most at either the MBTA or in the court system as clerks or judges.
Howie moved on to the Flaherty family with numerous examples of a family entrenched in the public sector. He would also touch on some of the background with Kennedy and Kerry as well as newcomer Elizabeth Warren, the fake Indian.
To wrap up his talk, Howie gave a little history lesson. Up until 1946, the Massachusetts House was primarily dominated by Republicans, and then the Democrats took over. The Senate was held by Republicans until 1958. In the “old” days, he said, a legislator would list his profession as farmer, dentist, mortician, or one of the many other trades or professions of regular working people. Today, he says, too many legislators list their profession as “Legislator.”‘
Howie ended the evening by suggesting that the Web site universalhub.com was great for keeping up to date on local politics. 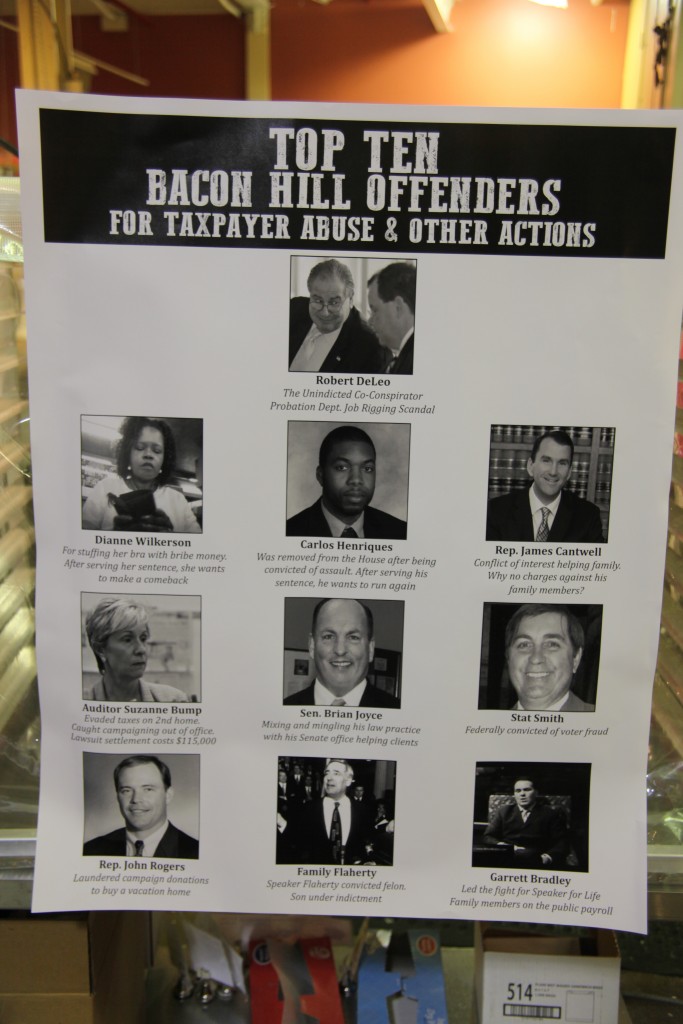 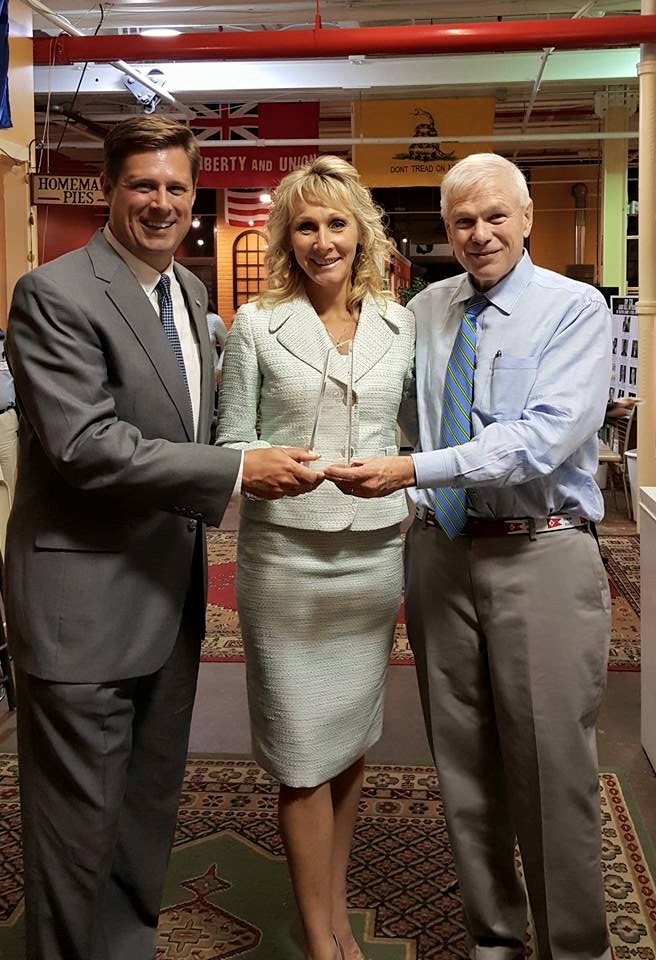