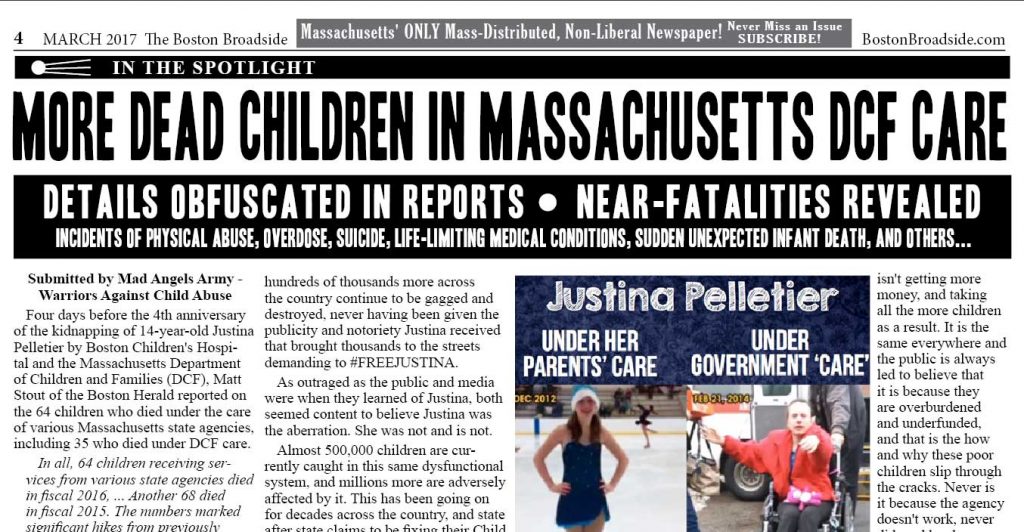 Four days before the 4th anniversary of the kidnapping of 14-year-old Justina Pelletier by Boston Children’s Hospital and the Massachusetts Department of Children and Families (DCF), Matt Stout of the Boston Herald reported on the 64 children who died under the care of various Massachusetts state agencies, including 35 who died under DCF care.

Justina could have easily become one of those statistics if her father didn’t break the unconstitutional gag order placed on him by a judge under the auspices of “protecting the confidentiality of a minor.”

Aside from stopping the federal funding under Title IV D and E that incentivizes states to take children from their families and adopting them out to strangers, “protecting” the confidentiality of the minors is another thing that needs to be abolished forthwith.

The only thing being protected is the public learning the truth of how this agency really operates and what goes on behind closed doors and closed courtrooms!

While Justina’s plight was widely followed, even internationally, because her father broke his silence and risked jail to save his daughter’s life, hundreds of thousands more across the country continue to be gagged and destroyed, never having been given the publicity and notoriety Justina received that brought thousands to the streets demanding to #FREEJUSTINA.

As outraged as the public and media were when they learned of Justina, both seemed content to believe Justina was the aberration. She was not and is not.

Almost 500,000 children are currently caught in this same dysfunctional system, and millions more are adversely affected by it. This has been going on for decades across the country, and state after state claims to be fixing their Child Protection Service agency (CPS), only to have it be exposed again and again as failing children.

In Massachusetts, DCF has been revamped with name changes and all, no less than four times in the last decade  with absolutely no positive result, but boatloads of money infused as a means of “fixing” the agency.

The fact that what happened to Justina and her family could happen at all is a testament to this agency’s out-of-control and over-the-top kidnapping of children who never should have been interfered with. To this day, there has never been a full accounting of the millions spent to physically, emotionally, and financially destroy Justina and her family. This is indicative that there is no interest or intent to stop it from ever happening again. No one will ever be punished, prosecuted or held accountable for anything that happened in this high-profile case, so just imagine the tens of thousands of others that you never hear about and are swept under the rug. Boston Children’s Hospital (BCH) alone works with the state to hotline over 400 children a year. That’s more than one child or family every day from people who bring their children to BCH in search of the best medical treatment they hope to procure, only to have their lives turned upside down, and in some instances, their children die. See how long BCH has been kidnapping kids –from other countries:  https://amiracleforus.wordpress.com/2015/06/05/how-long-has-bch-been-kidnapping-kids-from-other-countries/.  How many more Justinas lurk behind this wall of secrecy where neither BCH nor the state have any obligation to report other such atrocities and/or the media has no interest in pursuing?

Across the country the public briefly takes note of the CPS agencies when there is a sensational headline of a child who is killed or dies in state custody, and the knee-jerk reaction is to let the money roll in to these agencies, because, after all, they must need it to better protect these poor children. In Massachusetts, the story of Baby Doe who washed up in a trash bag on the shore of a Boston island made national headlines when it happened, but became barely a footnote when the headline ran: “DCF worker who copied reports in Bella Bond case keeps job.” (https://tinyurl.com/jv6oa65)

But in conjunction with seven-year-old Jeremiah Oliver around that same time, millions of taxpayer dollars were poured into the agency to “fix” this agency on the premise that they were overworked and understaffed, and needed more hires and training to avert this from happening again.

Jeremiah was found dead in a suitcase by the side of the road in the same state as Baby Bella. One of his headlines was “The short, unhappy life of Jeremiah Oliver, failed by all.” (https://tinyurl.com/hdftaq9)

The article goes on to say: “The boy’s name has since become synonymous with one of the worst lapses in the history of the Massachusetts Department of Children and Families, after it was revealed that a state social worker had skipped eight mandatory monthly visits with Jeremiah, overlapping the time the child disappeared.”

But the attention only lasts as long as the headlines and the agency’s cry for money to stop such tragedies, not the day-to-day suffering inflicted upon the hundreds of thousands of other children caught up in the CPS nightmare happening across the country.

Try to find one state that is not groveling, again, to fix their broken CPS agency because of devastating headlines of dead children or horrific abuse of foster children in state care, and who again isn’t getting more money, and taking all the more children as a result. It is the same everywhere and the public is always led to believe that it is because they are overburdened and underfunded, and that is the how and why these poor children slip through the cracks. Never is it because the agency doesn’t work, never did, and has been proven to be broken time and time again. Never is it because they are so screwed up, are taking so many kids they are overburdening themselves, getting it all wrong, and the system has been completely corrupted by special interests set on getting the federal dollars to support the cottage industry of services that has sprung up around it. Never is it because the agency is completely non-transparent, and unaccountable, under the auspices of protecting the confidentiality of the children or family. And never, never, never is it because CPS has really become a child trafficking ring, concluded many times over and years ago by many.

Former Georgia State Senator Nancy Schaeffer conducted a four-year investigation into these horrors, and before her suspicious murder/suicide just prior to a documentary on the matter coming out, she made these claims in a must-see video: CPS Steals Children for Profit – Your Tax Dollars in Action! (https://www.youtube.com/watch?v=ztEqMounuRU)

The video is 10 years old and not one thing has changed, except the money incentives and bonuses have increased!

Here’s the successful formula that works every time. Horrific headlines of dead children come out. More money is pumped in to fix the problem, and more kids are taken in as safety precautions to not let it happen again. The system becomes more overwhelmed. More children are abused and die. Rinse, rinse and repeat, over and over with every publicized tragedy or outrage – to save the children with no transparency, accountability or prosecutions all along the way. Meaningful change never comes because there are too many agencies now dependent on the money that comes from taking kids and bonuses to adopt them away from their families.

The public needs to wake up to the truth, and start demanding transparency and accountability for children in the system so that they do not continue to be used as a commodity to balance state budgets and to support the cottage industry that has sprung up under the guise of child protective services. And, oh yeah, send the children that never should have been taken in the first place, HOME, and see how much money there is to save and protect the real children in need, currently ignored because the system is so overwhelmed. How long are we going to keep doing this to children and families?

When are we going to get a full accounting of the millions spent to destroy Justina Pelletier and her family so the public can know, once and for all, how this really goes down?

The Pelletiers are suing Boston Children’s Hospital and this will likely get settled in a multi-million out of court settlement, but how does that account for what the state did to Justina, and continues to do to so many others, with no transparency or accountability, and all under the guise of protecting children? ¨

Yes, There ARE Conservative Republicans in Massachusetts, and Yes, Our Fight Against the Liberal Fake Republicans Has Just Begun

IT’S ALL ABOUT THE DELEGATES – TO BE CHOSEN BY YOU, OR STOLEN BY THE PARTY ELITE

READER ALERT!  If you are a Republican and have voted for Ted Cruz or Donald Trump, your vote could most likely be stolen from you. The Mass. Republican Party will Read More…

The Case Against John Kingston, III

by Steve Aylward Last month I attended a meeting of the Belmont Republican Town Committee. Town Committee meetings of late have gotten a bit more interesting, as the three U.S. Read More…