Those who don’t learn from history are doomed to repeat it. How many times are we going to be fooled by rich Republican RINO candidates?

Here we go again. The latest rich guy is John Kingston, III from Winchester. His team has done multiple mailings and Facebook ads, pretending to be tough on illegal immigration. Kingston is a RINO who will sell us out in a heartbeat.

Kingston should have spent some money to clean up his past before jumping into the race for U.S. Senate. Kingston funded Evan McMullin’s race for president to try to stop Donald Trump from getting enough Electoral votes. That means amnesty Hillary Clinton would have won if Kingston had succeeded. That should be enough to disqualify Kingston from the primary. 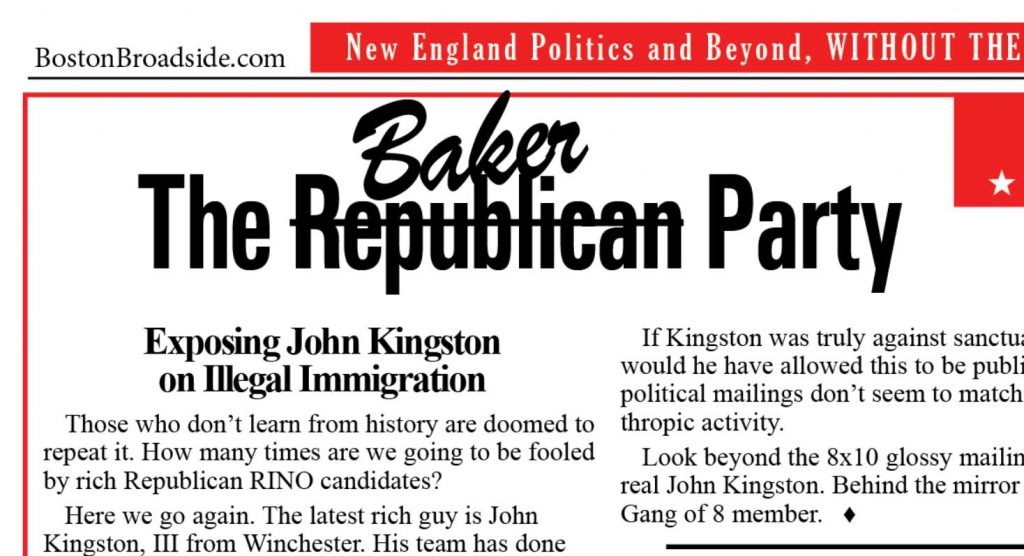 Kingston’s pro-amnesty ties don’t end with Hillary Clinton. As a philanthropist, Kingston established websites for free-thinking exchange. It’s not free-thinking. It’s liberal thinking. We have the Boston Globe and the New York Times for that.

On his website, Patheos, Kingston published articles “Sanctuary and Civil Disobedience” (Parts 1 and 2) and “What would Jesus Do? The Sanctuary Church Movement.” These articles don’t advocate for ending sanctuary cities! In a nutshell, you are not a good Christian if you are not in favor of the sanctuary movement. Tell that to Matthew Denice’s mother or the two doctors in Boston killed last year.

Here’s an example of what Kingston published on Patheos:

“I am also learning about sanctuary cities – which are cities that have decided that they will not deport people who are stopped for minor traffic offenses but are undocumented. Trump has said that he will stop federal money from going to sanctuary cities, which currently include over 300 cities and counties, such as San Francisco, Los Angeles, Chicago, Seattle, Berkeley, New Orleans, Newark, Santa Fe, New York, Philadelphia, Dallas, Spokane, Las Vegas, and Washington, D.C. Trump’s home city of New York could lose $10.4 billion in funds – for Housing, Social Services such as Medicaid, Children’s Services. This would be very bad for the economy since it would take away funding for many jobs, from education, perhaps highways. The threat is probably unconstitutional, and it makes no sense to me.”

If Kingston was truly against sanctuary cities, would he have allowed this to be published? His political mailings don’t seem to match his philanthropic activity.

Look beyond the 8×10 glossy mailings to see the real John Kingston. Behind the mirror you will see a Gang of 8 member.   ♦

Another Expensive Lawsuit for GOP?

The Massachusetts Republican Party has earned a reputation for being dishonest. After the expensive lawsuit victory by Mark Fisher where the GOP establishment was exposed for cheating, you would think that they would have learned their lesson. No such luck. They are right back at it.

This time they are working to fix the convention for their RINO candidates for the U.S. Senate—Beth Lindstrom, or more commonly known as Lying Lindstrom, and John Kingston, also known as Thurston Howell, III.

Let’s count the ways the MassGOP is working to rig the convention:

As Republicans, we fight for the integrity of our elections that are being threatened with same-day voter registration. How can we continue to push for show ID to vote and other measures when we are allowing our convention to be a complete mockery?

If the Mass. GOP continues to rig the convention against Diehl, I suspect that donors will be paying another hefty payment for legal fees and judgments.

And worse, look what they’re doing to an announced opponent of Baker? Open the money vault, because the legal fees will just climb, and again, we’ll see no help for down-ticket races (Remember the chart on page 13 in The Boston Broadside’s February edition? Should tell you all you need to know about the MassGOP’s effectiveness.)     ♦

It is not too hard to figure out which campaign was responsible for cyberbullying Holly Robichaud of the Geoff Diehl for U.S. Senate campaign.

According to FEC reports, Lindstrom has hired the Shawmut Group which is owned and operated by Eric Fehrnstrom. You know Fehrnstrom from running Romney’s multiple presidential campaigns into the ground. Not only is Fehrnstrom incompetent, but he has been caught cyberbullying in the past. Fehrnstrom was behind an anonymous twitter account attack during a gubernatorial campaign. He exposed his dirty hand when he posted his thoughts from the wrong account.

Blame was attempted to be shifted to fake Republican John Kingston with pointing the website to his page. Are we supposed to believe that Kingston is soooo stupid that he would leave his fingerprints all over this? Or does it make more sense it was Fehrnstrom who has done something like this in the past, doing this for Lindstrom?

More evidence it was Lindstrom behind the cyberbullying is the taunting that took place on Holly’s Facebook page. Lindstrom’s surrogate Chris Walton authored a nasty post on her page exposing his knowledge of additional attacks. Walton isn’t just a supporter of Beth’s. His child is dating one of Lindstrom’s sons and he is also a member of the credentials committee that oversees the validity of delegates.

Walton’s antics were reported in the Boston Globe. The question now is: Why hasn’t Republican State Committee Chairwoman Kirsten Hughes removed Walton from the credentials committee? He is not only a nasty, petty man, but he is clearly biased.

All of this shows a complete desperation on behalf of the Bad Beth campaign. First, she is caught lying to the Boston Herald about her campaign finance report. Second, she has been inflating her resume! Who knew a receptionist saved the entire GOP? That is like the person who schedules your heart operation claiming that they cured your heart disease instead of the surgeon. That’s not the only tall tale Lindstrom has told. Third, Bad Beth cannot seem to answer the most basic of questions. We don’t need someone on the ticket who will embarrass us. Finally, Bad Beth spends her days attacking fellow Republicans rather than Warren. We already have enough RINOs.      ♦

On Saturday, February 17, 2018, eight Republicans gathered to participate in the Boston Ward 21 Delegate Caucus for the 2018 Mass. GOP State Convention in April. Two state committeemen, three spokesmen for U.S. Senate candidates and three Ward 21 Republicans were in attendance. Everyone was in a good mood and anxious to begin this process. Unfortunately, the three Ward 21 officers, the chairman, secretary and treasurer were MIA (missing in action).

When the ward officers didn’t show up, we called the ward chairman; he never answered our calls, nor returned them. Eventually we reached our district chair and found out the caucus date had been postponed to the following Saturday due to snow. As you can see, in the photo above right, it was a perfectly clear day, not a snowflake in sight! The snow didn’t begin until nine hours later, as forecast. 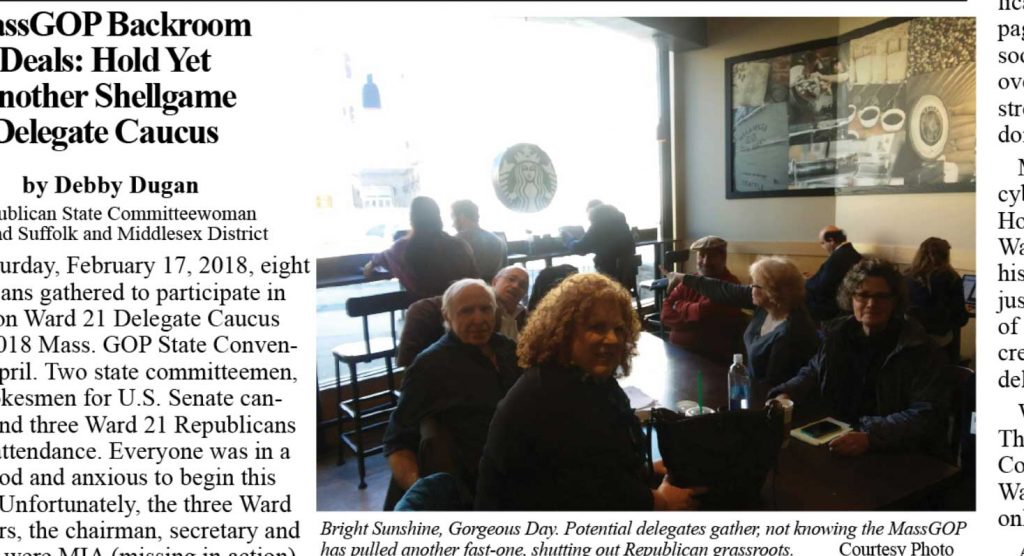 What we did find out was that Victor Pap, the political director of the Kingston campaign, had notified the other two state committeemen and let them know: the ward chair had postponed the caucus.

Is this the new mode of operandi for the MassGOP? Allowing political campaigns to organize Republican city and or town committees, determine meeting times and places, determine who gets notified and who doesn’t?

It’s difficult enough being a Republican in Massachusetts without these back room dealings! If this is how our Party leaders operate, why don’t they go across the aisle? Democrats don’t have a problem with these bad behaviors. Join them and let us grow our Party with real Republicans!

He Should Not be Named: Fraudulent ‘Whistleblower’ Eric Ciaramella

QUICK NOTE, MORE TO COME: He Who Should Not Be Named: Eric Ciaramella According to one of the biggest investigative journalists in the nation, Paul Sperry, the name of the Read More…