Fearing a victory by Donald Trump, the Republican establishment is in complete panic. Nationally, GOP elites are openly talking about a brokered convention.

FOX News, The Wall Street Journal and The Weekly Standard are desperately shilling for Florida Sen. Marco Rubio. Some are even calling for a moderate Republican to run as a third party candidate should Trump capture the GOP nomination.

In short, establishment RINOs would prefer to have Hillary Clinton win in November than see a real conservative populist take control of the party. Beltway Republicans have been unmasked. They pay lip service to conservative principles. Yet, they only care about one thing: power.

Nowhere is this more evident than in Massachusetts. It may be a bastion of Democratic liberalism, but the grassroots of the Bay State’s Republican Party is solidly conservative — and staunchly populist. 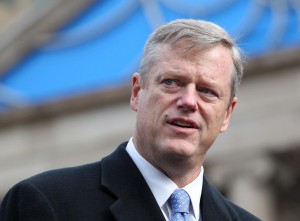 In fact, Trump’s America First nationalism is attracting numerous supporters across the political spectrum, especially frustrated independents and blue-collar Democrats. He is bringing in the new voters RINOs consistently claim the GOP needs. Instead of welcoming the rise of Trumpism and embracing the party’s conservative base, Massachusetts’ Republican Gov. Charlie Baker is seeking to smash it.

The GOP centrist is engaged in a vicious political purge. His goal: To marginalize and muscle out conservatives from the Republican state party apparatus. His thuggish behavior is reminiscent of Tammany Hall under notorious Boss Tweed, who used patronage and ruthless intimidation to crush any internal opposition.

Boss Baker, along with Lieutenant Gov. Karyn Polito, want to get rid of every single conservative or Trump-style populist from the GOP’s governing state committee.

They have done something unprecedented: use the governor’s position — backed by huge sums of money from secret and wealthy RINO donors — to actively support candidates in 52 out of the 54 races for the Republican state committee.

On March 1, Republicans will not just be voting in the GOP presidential primary. In each state Senate district, they will also be voting to elect a man and a woman to serve on the 80-member Republican state committee. Baker is deliberately targeting every conservative to be replaced by a moderate hack.

And this includes conservatives who have been fiercely loyal to Baker; in fact, they were seminal to his 2014 election victory.

Take the case of Steven Aylward from Watertown. A staunch anti-tax activist, Aylward played a key role in the successful 2014 campaign to repeal automatic increases in the state’s gas tax. The governor admitted that without Aylward and his fellow anti-tax supporters Baker would never have defeated — by the narrowest of margins — Democratic opponent Martha Coakley.

Moreover, Aylward actively stumped on behalf of Baker. His reward? Baker has endorsed Neil St. Clair for the committee seat held by the incumbent Aylward. The reason is obvious: St. Clair is nothing more than Boss Baker’s poodle, a reliable yes-man who will be a rubber stamp for the governor.

St. Clair is not even a Republican. He is a carpetbagger and a Democrat who only registered as a member of the Massachusetts GOP last fall when Baker brought him in from New York.

This pattern is being repeated across the Bay State. Baker’s aim is to control the entire Republican state apparatus — its staffing, resources and most importantly, money. He has openly admitted that he despises both Trump and Texas Sen. Ted Cruz. He loathes economic and social conservatives.

Baker considers them the enemy, not Democrats or liberals. His purge is part of a larger effort to transform and rebrand the GOP into a centrist party — one that champions amnesty, open borders, abortion, same-sex marriage, gun control, big government and deep hostility towards religious liberty. Call it Democrat-lite.

In the March 2015 issue of The Atlantic magazine, Baker’s spokesman, Tim Buckley, said that, during the 2014 gubernatorial campaign, his boss was determined in “showing he could say ‘screw you’ to the Republican Party.”

This is what the governor actually thinks of the GOP base and its voters. For Baker, they are like a cheap date he can discard after having his way. No wonder he was enthusiastically endorsed by the leftist Democratic mouthpiece, The Boston Globe and the RINO tabloid, The Boston Herald. His governorship is based on screwing conservatives and principled Republicans.

All, however, is not lost. Just as efforts to demonize Trump are backfiring on the GOP establishment, the same thing is happening with Boss Baker. There is a growing backlash. The more rank-and-file Republicans hear about Baker’s thuggish behavior, the more disgusted — and angry — they become. They need to send a clear message to the RINO elites: authoritarian purges are unacceptable. This is a battle for the soul of the Massachusetts Republican Party. Will it be dominated by progressive-leaning moderates or by populist conservatives, by the donor class or by the grassroots, by the Chamber of Commerce or by Middle America? To find out about how to vote on Tuesday, March 1, I urge everyone in the Bay State to visit www.votecorevalues.com and www.votereform.org.

Boss Baker is not just an iron-fisted RINO bent on cleansing conservatives and Trump populists from the GOP. He is a turncoat and traitor, who betrayed the very people who helped to elect him.

Jeffrey T. Kuhner is a columnist at WorldTribune.com and the host of “The Kuhner Report” weekdays 12-3 pm EST on WRKO AM-680 in Boston.

Why Should a Conservative Vote for Charlie Faker?

Adam Reilly does a great job, as always, balancing ideas from various folks. Our publisher, Lonnie Brennan, met briefly with Adam and shared some thoughts from our readers: sure, there’s Read More…

June 21st at 6:30 pm at Flatbreads (Black Swan) in Georgetown.   State Committee Candidates Amanda Kesterson and Diana Ploss will discuss the issues that impact town committees in our Read More…