Jim Friar’s first memories are of walking the length of the case displays at Kittery Trading Post in Maine where he fell in love with guns.

As a teenager, he survived a near-death experience in a car accident that left him an incomplete paraplegic. School was never a fit – so, unemployable (who’s going to hire a welder or machinist with his disability), he stayed true to this passion.

Over the course of 20 years, he taught himself everything there was to know about guns, their mechanisms, function, and how to repair them. When he ran into difficulty getting parts for older guns that were no longer in production, he began making his own parts.

Sometimes he wasn’t satisfied with bluing the guns he restored, so he researched coatings and came across Cerakote – a product used on firearms that reportedly chemically-bonds into metal – making it impervious to moisture and rust – even when the surface coating is worn.

Never one to accept as fact something that he hadn’t personally tested, he took a pair of old chrome winches from his father’s sailboat, sand blasted them, Cerakoted them, and re-installed them on the boat where they were exposed to all the elements for three years, without appreciable effect. Recognizing its potential, he flew out West to Cerakote’s headquarters where he trained and was certified as an applicator.

To the right is an example of his work: a classic Browning A-5 sweet sixteen shotgun that he restored for his father who wrote this article.  ♦ 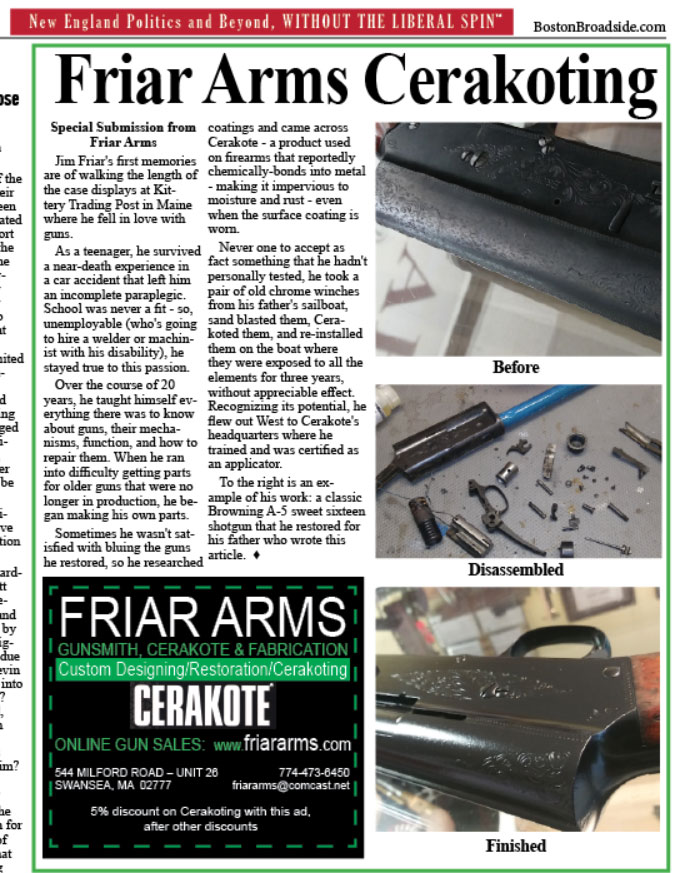 Gun Talk FROM OUR PRINTED FEBRUARY 2019 EDITION There’s a lot of chatter back and forth about what is right and what is wrong. How to carry, how not to Read More…